Looking for the next challenge in consulting 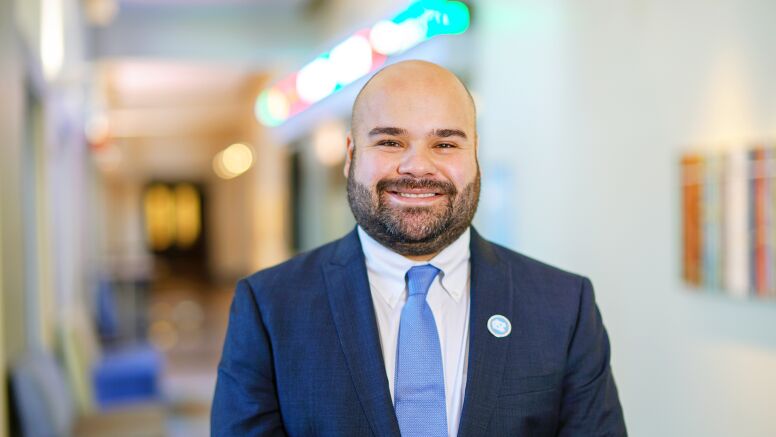 Reinaldo Caravellas (MBA ’19) radiates positivity. Originally hailing from Brazil, he came to UNC with the hope of landing a role as a consultant.

It’s a career course many dream of and one that UNC Kenan-Flagler makes more than achievable, says Caravellas, who has the unmistakable air of someone who loves what they do.

At the start of his career, he found himself regularly seeking new challenges. Every few years he would switch up his role and explore a new area of the business, working extensively within higher education as an operations manager, a financial manager, a teaching assistant and a professor – until he came to a realization.

“Every three years I would change my role, ace new challenges, and when I succeeded I would want to move to the next one,” he says. “I realized that I was a consultant without the title.”

This realization was a big deal for Caravellas. It helped him to see that he wanted to pursue consultancy permanently, and he knew an MBA would help him do it. Plus, it suited his temperament.

“I’m a true geek,” he grins. “So business school was a natural movement for me.”

The first factor Caravellas considered in pursing his MBA was internationality. He had lived in Portugal for a time but he’d never worked abroad, and an MBA would be the ideal opportunity to make this dream happen.

He also was looking for a close-knit community that would support him.

“It’s not always easy to be an immigrant,” he says. “I wanted to make sure that I was in a place where everybody values the community, and where I would have a support system.”

Most importantly, there were the professional factors.

He knew he needed to go to a school that was well-respected among the big consulting firms and, crucially, where they recruited. And as someone very familiar with higher education, he wanted high-quality course content and top-tier professors.

UNC Kenan-Flagler stood out on all three fronts. 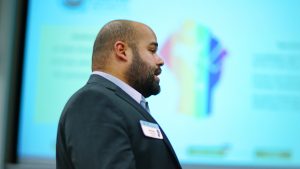 “The School was welcoming and friendly, just like Brazilians are,” he says. “Plus I knew that the companies I was interested in recruited there, and that the quality of the content in the classes scored very highly.”

When Caravellas stepped into his first semester at UNC, he was immediately surprised. Not by the welcome he received, or the quality of his classes – after all, he’d chosen the School because of these qualities – but by the opportunities he had from the very first day to challenge himself.

“I had the opportunity from day one to not only showcase what I was able to do, but to put myself outside of my comfort zone,” he says.

Academically, Caravellas pushed himself to take classes that would challenge him, for instance taking a finance class with professor Camelia Kuhnen that he now remembers as one of his favorites – he later became a teaching assistant for it later in the program.

“It’s easy to have your voice heard at UNC Kenan-Flagler. You have a lot of opportunities to showcase initiative.”

He also had the opportunity to learn from “Managing the Professional Services Firm,” which was vital experience as an aspiring consultant.

“It was a very good opportunity to understand the scope of a professional services firm – the debates in the classroom were fruitful and helped me to understand how different people reacted to complex business problems and have a framework to address gray areas,” he says.

And he excelled in the classroom: He was inducted to Beta Gamma Sigma, the international business honor society.

Outside of the classroom, too, Caravellas flourished. Despite his friendly and personable demeanor, he describes himself as naturally quite shy, and he came into his own on campus.

He took part in a flash mob, which he says he could never have imagined doing before, and he became a prominent member of the UNC Pride Club, which turned out to be one of the most significant experiences of his time at UNC Kenan-Flagler.

“I came to the U.S. not sure if I would be out,” he explains. “I was super happy to find out how supportive the Pride Club was, and after one month I was so comfortable being part of the community that I was walking the hallways in my pride shirt!”

Caravellas was such a great advocate for the Pride Club that he was elected as its president, becoming a strong advocate for LGBTQ+ causes. 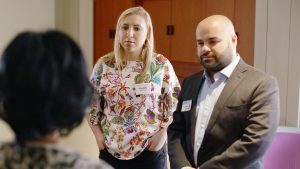 Reinaldo and CWIB president Charlie Burnett at a 2019 Corporate Advisory Board on Diversity and Inclusion.

Caravellas engaged in the School community in many other ways. As a Dean’s Fellow, he was a member of its steering committee, and shared his time with classmates as a career mentor and tutor. He participated in the Nonprofit Board Consultants Program and served as VP of Careers with Impact Conference in partnership with the Center for Sustainable Enteprise; VP of International Community Service; and Community Service Leader working with the Salvation Army Thrift Shop.

His involvement and initiative made Caravellas a well-loved figure within his cohort and the wider school. He was named one of Poets & Quants’ “MBAs to Watch” in 2019, and won the Excellence Core Value Award (nominated by his classmates), as well as the Johnson & Johnson Award for best Diversity Club President.

“It’s super easy to have your voice heard.”

This freedom to take charge of his experience and get the most out of it was what made Caravellas’ experience at UNC so special.

“It’s super easy to have your voice heard at UNC Kenan-Flagler,” he says. “I never thought I’d be able to interact so much with the program director, the admissions team, the professors—you have a lot of opportunities to showcase initiative.”

This freedom also empowered Caravellas to make the changes he wanted in his professional life. Reinaldo scored a place as a McKinsey summer associate while getting his MBA, and is now an associate at the firm in the Chicago office.

His advice to others hoping to follow the same path is simple: “Start planning yesterday. You don’t believe how fast things go once the MBA starts – take that inward look as soon as you can. It’ll be life-changing.”

“Just look at me: I came from Brazil, and had never worked abroad; now I’m working and living in Chicago as a consultant. The prize at the end of the hard work is worth all the effort you put in.”