What the Dean’s Fellows Program gave me 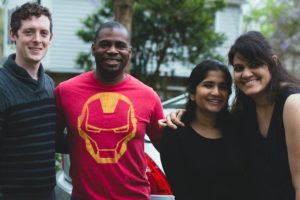 I had mixed feelings as I said my goodbyes at the New Delhi International Airport and boarded the place for Chapel Hill. The excitement of a new adventure and the anxiety of the unknown created a weird blend of emotions within me. Looking back, I was probably scared, too. What I didn’t know then but learned over the next year was how easy the Carolina community would make my transition from my home in India to my new home in Chapel Hill.

As a nervous first-year MBA, I attended a variety of events, including one of the Dean’s Fellows gatherings. This gave me an opportunity to learn more about the second-years who served as Dean’s Fellows – and I was nothing less than impressed. It wasn’t just what they had done in the past – it was their zeal to continue to give back to the UNC Kenan-Flagler community in the future. Learning about the projects done by past Dean’s Fellows that have become part of our School’s curriculum and culture inspired me to leave a legacy of my own.

I led a Dean’s Fellows project during my first year in the MBA program and had the opportunity to see my project come to life over the next four months. The goal of the project was to help prospective MBAs gain insight into the Dean’s Fellows Program and learn about the experience from the student perspective. As part of this project, my team designed the Dean’s Fellows page on the UNC Kenan-Flagler website and developed a series of blog posts highlighting the experiences of past and current Fellows.

During my journey as a Dean’s Fellow, I found an exceptional set of peers and second-year MBA advisors who not only became friends, but also mentors. The project pushed me to think strategically and, at times, make some bittersweet decisions. The experience of my team members gave me direction and helped me lead the project successfully. I not only learned about collaborative culture at Carolina – I experienced it.

Through Dean’s Fellow gatherings, dinners and project meetings, I got access to people who I not only connected with, but was also inspired by. They motivated me to push myself to do better than I thought I could. In a different country, I found a diverse set of people tied by a common goal – giving back to their community – who held each other to the highest of standards.

As my first year in Chapel Hill came to an end and everyone headed off to their internships, I could feel it already. This place has become my second home – and I am going to miss it.