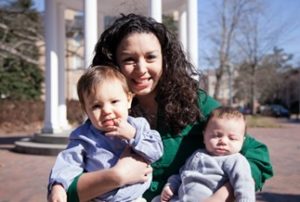 Two might just be Ximena Roth’s (MBA ’16) lucky number. During her two years in the full-time MBA Program, her family has expanded – twice.

Roth found out she was expecting her first child a few weeks after she was admitted to UNC Kenan-Flagler. She hadn’t anticipated juggling business school and motherhood, but after discussing it with her husband they agreed her career and their family would benefit in the long run – so she went for it.

It didn’t take long for Roth to confirm that she made the right choice. From day one, it was evident that UNC Kenan-Flagler isn’t your typical business school.

“Everyone here wants you to succeed,” she says. “The faculty and staff treat everyone as an individual. The students value collaboration and teamwork and are willing to help each other out, whether it’s in classes or working or recruiting.”

She experienced this firsthand when she found herself struggling with finance – her Achilles heel going into business school – during her first year. The moment she mentioned sheß was having difficulty, a classmate sat down to review the material with her.

Another time, during recruiting season, a classmate sacrificed some of his own time to introduce Roth to a recruiter. Roth did the same for another student, who in turn did the same for someone else.

“I strive for excellence in everything I do – but I haven’t done this alone. I’m really appreciative of the UNC Kenan-Flagler community.”

“Collaboration is contagious at UNC Kenan-Flagler,” she says. “It’s a win-win.”

It’s also a stark contrast to the cutthroat approach that plays out at some other top schools. UNC Kenan-Flagler’s emphasis on core values, collaborative culture and tightknit community are what drew Roth to Carolina in the first place. On paper, she knew that it was a top business school – but visiting campus really sold her.

“UNC impressed me even more than I expected,” she says. “I met so many people from different cultural and professional backgrounds.”

And because her campus visit coincided with karaoke night – part of the annual MBA Legacy Cup challenge – Roth also got a taste of what student life is like outside of the classroom. “Everyone was really smart and very genuine,” she says, “but they didn’t take themselves too seriously.”

A year later, Roth took to the stage and performed on karaoke night – 12 days before her due date – proving that being pregnant doesn’t mean having to sacrifice a traditional student experience. As a parent, she’s had to strike a balance between academics, activities, recruiting, social life and family obligations – but so have all of her peers.

“Time management is really challenging, especially because there’s just not enough time for everything you want to do in business school,” she says. “I wanted to do more than double the activities I’ve been a part of, but that’s not possible.”

Adding not one, but two babies into the mix challenged Roth to be smart about managing her time. Outside of class, she focused on her passions. At the top of her list: The Christians@Kenan-Flagler club – in which students connect and share their faith through social gatherings, book discussions and guest speakers – and the Latin America Business Association (LABA), which focuses on enhancing the educational, cultural and social experiences of the Latin American and Hispanic communities at UNC Kenan-Flagler.

With a baby in tow and another on the way, Roth – then in the second semester of her second pregnancy – completed her summer internship in corporate social responsibility at Whirlpool Corporation. The position tapped into her nonprofit background and gave her the hands-on experience in marketing, operations and strategy that she needed to change careers. It also reinforced Roth’s belief that women can balance the demands of being a business professional and being a mom.

Roth attributes her success, first and foremost, to her faith. She’s also quick to point out that she’s fortunate to have a strong support network – including her husband, family, friends, program staff, professors and classmates – behind her.

When she gave birth to her children – both born around final exams, one of the busiest times in the academic year – professors worked with her to arrange make-up exams and gave extensions on final assignments, telling her that family always comes first. Her husband relocated to Michigan and stayed at home to take care of their baby full-time while Roth completed her summer internship. And when her younger son was diagnosed with hydronephrosis, she received an outpouring of prayers, well wishes and support from classmates and program staff. Many even offered to babysit.

“I strive for excellence in everything I do – but I haven’t done this alone,” says Roth. “I’m really appreciative of the UNC Kenan-Flagler community,” she says.

Managing the demands of the full-time MBA Program through two pregnancies, two births and caring for two babies hasn’t been easy – but it’s been worth it, says Roth. Overcoming these challenges to achieve personal and career success has given her a renewed sense of self-confidence. While there’s no shortage of stress and pressure in business school – from recruiting to projects and finals – being a parent has helped put things into perspective, and the prioritization and time-management skills she’s acquired will be a huge asset when she begins the next chapter of her journey as a senior marketing analyst with UPS in Atlanta after graduation.

Roth hopes her story will encourage other would-be MBA students who have children or are contemplating starting a family to not put business school off.

“Go for it. Don’t be intimidated,” she says. “While it’s crazy, it’s actually been better to have kids during the MBA Program because the courses and schedules are much more flexible than if I were at a full-time job already.”

Best of all, “It’s really shown me what I can do,” says Roth.