When education is a family affair 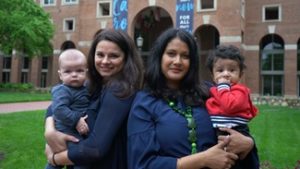 Journalists don’t usually believe in coincidences, but Mariana Thomas (MBA ’19) – a former TV news reporter – could not ignore their sheer number when she arrived at UNC Kenan-Flagler Business School in August 2017 to start her studies in the full-time MBA Program. At the time, Thomas was pregnant with her second child and wondering how she was going to handle raising her young daughter, digging into the intense core courses, and having her baby right around finals. Classmates kept telling her there was another pregnant student in the first-year class, but didn’t know her name.

Finally, she and Angela Gurtsishvili (MBA ’19) connected – and neither could quite wrap their minds around all the things they had in common with their pregnancies – including the same due date and both expecting boys. In addition, Thomas and Gurtsishvili already had daughters – Anjali and Salomea, respectively – who are nearly the same age.

The coincidences didn’t stop there. They also are members of the Behrman Legacy Group, which are MBA sections named after individuals who had tremendous impact on the full-time MBA Program.

During their first year in the MBA Program, many of the women in their class hosted a joint baby shower, for them. Their sons – Alex Thomas and Felix Bobkov – were born just a few days apart over fall break. And both received enormous support from their own mothers who spent time with them in Chapel Hill around the births of their sons.

Not surprisingly, the women had wondered how to manage the demands of rigorous studies and parenting. Once they found each other, they knew they didn’t have to do it alone.

They motivate each other. “Knowing Angela is here pushes me,” says Thomas. “If she can do it, then so can I.”

Indeed, they also help each other. Gurtsishvili had an impressive career in finance in Moscow before coming to UNC Kenan-Flagler. She helped Thomas with the quant-heavy studies of the core. And Thomas aids Gurtsishvili develop creative and communication skills.

“We are in a beautiful community surrounded by smart people. It’s one of the best experiences of my life, and I’m happy my kids can see it.”

“Angela is the quant and I’m the poet,” says Thomas.

Thomas’ willingness to make the huge leap from journalism to business and take on several leadership roles continue to impress Gurtsishvili. “Mariana is always smiling, energetic and welcoming,” she says “She’s not afraid to ask questions. She’s my comfort zone.” 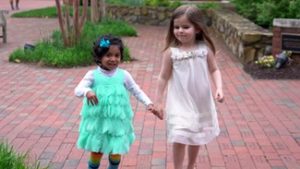 Business schools, including UNC Kenan-Flagler, are encouraging women to apply and enroll in MBA programs. Women have notoriously low representation among MBAs and C-suite executives. One reason women don’t enroll in MBA programs could be that the timing often coincides with when they tend to have children and doing both can seem like mission impossible.

In fact, Thomas almost did not make it to b-school when she learned she was pregnant only two weeks after receiving her acceptance to UNC Kenan-Flagler. “When you’re a mom, you prioritize a lot of other people first,” says Thomas. She wasn’t sure this was the best time to pursue graduate education, but her mother told her to go back to school now or risk not going at all.

Her mother, incidentally, also made it possible for her to complete her studies. She helps with the children and serves as a role model and confidante, says Thomas.

Now, she wants to support other women thinking about the degree.

“All I’ve learned here is awesome. My scope was so narrow. I did not see what was possible,” says Thomas. “The opportunities will blow your mind.”

Women can bring a much-needed alternative perspective to business, she says. “The way women see business problems is different than men do.”

For their summer internships, Gurtsishvili will work in corporate finance at Laureate Education in Baltimore, and Thomas will work in brand management for PepsiCo. in the Dallas metropolitan area.

Different journeys to the same destination

They both serve on the board of Carolina Women in Business. Gurtsishvili is the vice president of finance, and Thomas is executive vice president of leadership and development. While they want to empower women to join the ranks of business, their individual paths to business school were different.

After Thomas graduated from George Mason University with a BA in government and international relations, she had a successful career as a broadcast journalist. She won an Emmy as an assignment reporter for KFSN-TV in Fresno, California. Thomas credited the birth of her daughter for motivating her to aim for her MBA. She’s not looking back.

Born in Gori, Georgia, Gurtsishvili escaped with her family during the war Russian-Georgia war and moved to Russia at age 12. She studied financial mathematics at Plekhanov Russian University of Economics in Moscow, and had a successful career working as a foreign exchange and interest rate derivatives sales-trader at Sberbank CIB, the largest corporate bank in Eastern Europe.

Business school was part of Gurtsishvili’s plan even before she had children. And when she received news she was accepted to UNC Kenan-Flagler and pregnant again, she didn’t think twice. “I just thought it would be a little tougher,” says Gurtsishvili. “Everything met my expectations.”

She was taking a final exam when her contractions began. Gurtsishvili finished her test and went to the hospital. “We joke the baby will be an accountant because he decided to come during the accounting exam,” she says. 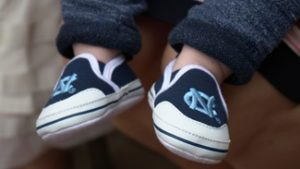 Gurtsishvili and Thomas acknowledge that being a mom and a full-time student while trying to build a future career in a highly competitive field is challenging.

“It’s feasible. You’re able to do recruiting, take classes and the rest,” says Gurtsishvili. “But it’s not possible to do without help.” During the time her mother was in Chapel Hill to help, Gurtsishvili made the point of taking on more assignments and condensing career work to have more breathing room by the time her mom returned to Russia.

The two women suggest moms also lean on the school they choose. In the early days of her son’s life, Thomas shuttled between home and school to nurse her baby. She told her professors she might occasionally be late to classes, and they were understanding. When necessary, she also took advantage of recorded class sessions. Thomas appreciated her classmates’ flexibility, such as when she participated virtually in team meetings so she could pick up her daughter at pre-school.

Another reason Thomas and Gurtsishvili are making this work is they don’t feel confined to the unwritten rules of motherhood. They figure out what works for them and their unique situations.

Of course, that does not prevent Gurtsishvili from feeling pangs of guilt about having to study when her kids request attention.  And Thomas can relate. “There are days when I wonder, ‘What was I thinking?’ But, that’s the case for any mom regardless of the situation – whether she stays home, works full time, goes to school, etc. Mom-guilt is real”

There is gratification in their children’s pride. Gurtsishvili’s daughter emulates her by wanting to “study” all the time. Thomas looks forward to the day she can explain to her children that even if life gets in the way, they should always pursue a higher education. “They’ll see mom did it,” she adds.

Neither would change their decision about returning to school, even on their hardest days.

“I’m thankful my life went this way,” says Gurtsishvili. “The experiences you have in early childhood stay with you forever. We are in a beautiful community surrounded by smart people. It’s one of the best experiences of my life, and I’m happy my kids can see it.”