Serving as a force for good and growth 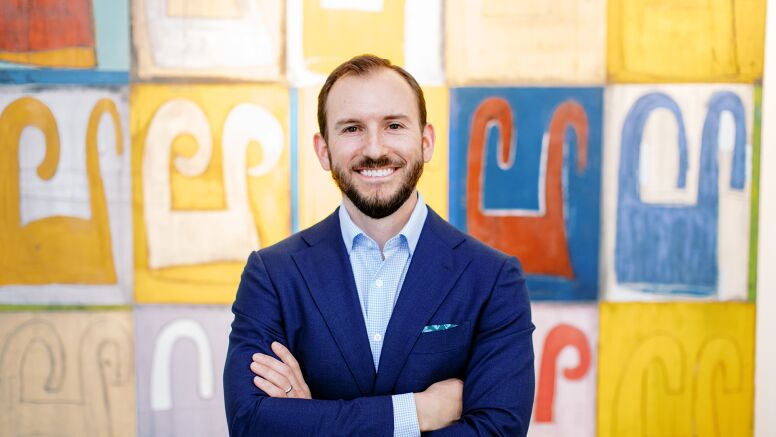 The story of Matt Pirrello (MBA ’21) is one of guts, strength and perseverance.

In 2009, as an undergraduate at Ohio University, Pirrello was a scholarship cadet in the Air Force Reserve Officer’s Training Corps (ROTC). During the summer between his freshman and sophomore year, he was selected for freefall parachute training at the Air Force Academy in Colorado Springs, Colorado.

Because he surpassed his classmates, Pirrello was given the privilege to be the first of his unit to jump during a flight in 2010. He earned a perfect score. He couldn’t wait for his next shot, but high winds delayed his second jump.

When he finally took the leap from 4,500 feet in the air, things went awry. The high winds swept Pirrello off course and slammed him into a windsock while traveling at 80 miles per hour. His right leg was severed, his left leg broken and a shoulder bicep was torn.

But he was alive.

Despite a yearlong recovery that included learning to walk and run with a prosthetic leg, Pirrello stayed determined to complete the ROTC program and earn an Air Force commission.

“I wanted to find my way to serve,” Pirrello says. “And knew that path would be different now.”

He wanted to fulfill his dream of being a pilot, but the loss of his leg mid-thigh made flying significantly more challenging. His determination was evident throughout his recovery and beyond.

“Matt is unstoppable,” as Lt. Col. Alejandro Cantu, commander of the Air Force ROTC detachment at Ohio University, told The Columbus Dispatch. “He’s everything we’re looking for in the Air Force to serve this great country of ours.”

Ever the athlete, Pirrello was elected team captain by 25 fellow wounded, ill and injured Airmen to lead the 2011 Air Force Warrior Games Team. He was the youngest on the team, and he went on to win individual gold, silver and bronze medals. Pirrello never gave up, returning to ROTC and completing the physical fitness requirements for active duty service, but the Air Force ultimately decided not to approve his commission.

With his military career behind him, Pirrello received an honorable discharge and earned his BBA from Ohio University’s College of Business. He launched his business career with Deloitte Consulting as a consultant in strategy and operations.

Later, he worked as a counterterrorism analyst at Coverent Consulting. He completed three deployments to Afghanistan interdicting terrorist attacks in coordination with the Intelligence Community and Special Operations Forces.

Seeking to further his leadership development, Pirrello decided to enroll in graduate business school. UNC Kenan-Flagler was the natural choice for him, he says.

“There was a cultural fit right away,” says Pirrello. “The School’s emphasis on veterans was evident and as an individual with a disability, was inclusive from the start. I said ‘yes’ to UNC Kenan-Flagler because they said ‘yes’ to me early on.”

The high-caliber faculty and peers who could contribute to his learning were big draws. The exposure to sustainability and inclusion as they relate to leadership also impressed him.

The ability to take coursework across the university was another plus. He took advantage of the opportunity to spend a semester studying Mandarin because he and his wife, Emily, who formerly worked in international women’s health and is now in consulting, want to work in Asia at some point.

Once he arrived on campus, Pirrello became a fixture in student groups. As vice president of learning and development for both the Marketing Club and the Veterans Association, he enjoyed helping classmates prepare for job interviews, networking and developing their career plans.

Mentorship is a big part of Pirrello’s service. As president of the Community Service Club, Pirrello feels like he is coming full circle.

“For me, it’s a way to give back in thanks to those who helped me after a traumatic injury when I needed it most,” says Pirrello.

He also is a peer mentor for the Amputee Coalition of America at UNC Hospital, where he works with those who have lost limbs to help them navigate the physical, mental and social changes that await them.

“The School’s emphasis on veterans was evident and as an individual with a disability, was inclusive from the start. I said ‘yes’ to UNC Kenan-Flagler because they said ‘yes’ to me early on.”

“I was in a military setting with many other amputees, so I saw the road ahead of me while I was going through physical therapy and healing,” he says. “That often doesn’t exist in a civilian setting.”

Pirrello relates to their experience and helps them navigate new challenges. For example, he might talk about how he feels more confident when he is wearing shorts because everyone can see his prosthesis from the start. If he is in pants, fielding questions or comments about his gait can be more difficult. Regardless of how the conversation starts, it is a positive, says Pirrello.

“It is an opportunity to educate someone else about what it’s like for individuals with disabilities,” he says.

These leadership roles prepared Pirrello for a career after graduation. Like all his classmates, Pirrello faced the interruption of his MBA program as a result of the coronavirus crisis. He held a virtual internship in brand management at Procter & Gamble (P&G) over the summer, but the non-traditional form of working did not put a damper on Pirrello’s experience.

“The company presentations happen fast and furious in the first year of business school,” he says. “It really bonds people.”

As a result, Pirrello forged strong friendships, and he and his fellow Carolina P&G interns held socially distanced events outside during the summer.

“Naturally, we helped each other in any way we could,” he says.

“There is hope on the horizon,” he says. “We hope to have in-person connections again before we move on and graduate.”

Pirrello, who combined a marketing concentration with entrepreneurship and sustainable enterprise, accepted an offer to be a senior brand manager at P&G in Cincinnati, which is close to many of his family and friends. He found alignment with the core values of UNC Kenan-Flagler and P&G’s priority to be “A Force for Good and A Force for Growth” in our communities. 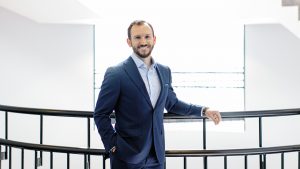 “Before starting my journey at UNC Kenan-Flagler, I identified leadership development as one of my top proprieties for my MBA experience,” he says. “I’m proud to say that UNC Kenan-Flagler has exceeded my expectations through outstanding faculty, courses and extracurricular opportunities to build my skillset as an inclusive leader capable of leading diverse teams to achieve great outcomes.”

With the academic year winding down, he and Emily are taking advantage of the time they have left in North Carolina, where they cherish the outdoors. They have become known in their neighborhood for their front-porch workouts.

The couple also enjoys cooking together. During the pandemic, they tried a number of new techniques and recipes. Pirrello is Italian American, which means he celebrates Christmas Eve with the Feast of the Seven Fishes. Since he and Emily were on their own for the holidays, they experimented and expanded on the tradition, which some of the extended family thought was “sacrilege,” Pirrello laughs.

Cooking new dishes is just one way that Pirrello likes broaden his horizons. In addition to his Mandarin coursework, he enrolled in the Global Immersion Elective to learn more about different perspectives from around the world.

Because of COVID, the class couldn’t to travel to Japan and Thailand, but Pirrello and his classmates still discovered new ideas, cultural norms and ways of doing business. He advises other MBA students to take full advantage of such opportunities.

“Having a life changing event when you’re 20, you learn nothing is guaranteed, and you have to push past your comfort zone,” he says. “Always bet on yourself.”