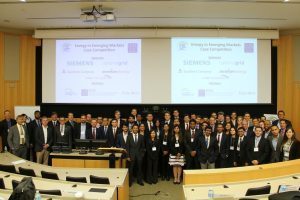 There were underwater electric cables and floating regasification centers. There were microgrids and battery storage systems. Sugar cane pulp and invasive woody bushes were proposed as significant feedstocks for electricity generation.

That was the scene at Duke University’s 2016 Energy in Emerging Markets Case Competition. The case topic focused on the future of energy in Cuba – specifically, how best to transition an island nation that has long depended on foreign, subsidized crude oil to the cleaner, more stable energy future that the Cuban government and its people are committed to. Of the 30 teams that applied, UNC Kenan-Flagler Business School was one of 12 teams – hailing from as far as The Hong Kong Institute of Technology and the University of California at Berkeley – selected to compete at the event.

Over the course of our research, our UNC Kenan-Flagler team realized that planning a nation’s energy infrastructure is a tall order! Cuba’s situation is especially difficult given the economic hardships the country has endured. Further complicating the problem is the persistent U.S. embargo, which has frozen Cuba out of access to traditional capital markets needed to finance transitioning to a more efficient and sustainable system of energy generation.

Our team opted for a pragmatic plan that gave as much attention to financing channels and investment strategies as it did to the technologies themselves. While we didn’t advance to the final round, we were proud to have modeled an economically and technologically realistic transition from 97 percent crude oil generation today to 42 percent renewables – the balance fueled mostly by clean-burning natural gas plants – with no crude or coal, which would result in drastic cuts to carbon emissions by 2030.

Here are a few key takeaways I gained from the experience.

I spend a lot of time thinking about how abundant electricity can be made available to people all over the globe without compromising the environment. I can’t put into words how exciting it was to see that there are so many other bright young minds that are focused on the same questions. If Cuba reflects a broader movement in the world of energy, the future will look brighter than we sometimes imagine.