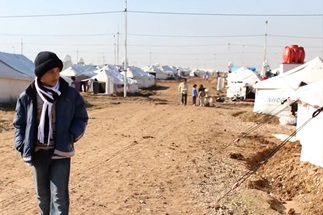 There’s another side to the conflict in the Middle East – one you don’t often hear about on the news.

It’s a devastating reality. And so is what happens next – or doesn’t, rather.

“Two million kids in refugee camps are out of school right now. There’s the potential for a lost generation,” says U.S. Army veteran and entrepreneur Scott Quilty (MBA ’15). “That’s not what this region needs. It’s not what any region needs.”

A lost generation wouldn’t just affect local communities in the Middle East – it would also have a significant impact on the world. The stakes are high. But rather than fixating on problems, Quilty is focused on possibilities. The region fraught with conflict is rich in opportunities to take action, drive change and restore hope, he says. 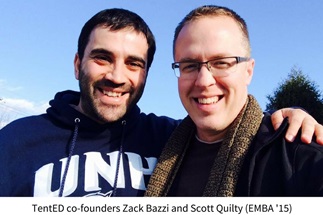 Quilty enlisted in the Army after high school, eager to make a difference in the world. His passion grew over the course of his seven years on active duty. It continued after his service was cut short by a roadside bomb that took his arm and leg in 2006. And today, it’s the driving force behind one of his entrepreneurial pursuits.

Quilty is the co-founder of a pair of startups: MedScribes – a service that pairs physicians in eight Triangle-area hospitals and clinics with college students who transcribe notes during patient visits – and TentED, a nonprofit aimed at advancing education for children displaced by war.

The impact that the people make when you’re there is invaluable and persists.

Both startups took shape while he was a student in the Weekend Executive MBA Program at UNC Kenan-Flagler Business School. Both are worthwhile endeavors. MedScribes provides a service to improve healthcare efficiencies in the U.S. – and it pays the bills, says Quilty. But it’s TentED that allows him to fulfill his passion and give back to a place he still feels deeply connected to.

The idea for TentED – short for Tent Education – was born during a Skype brainstorming session between Quilty and Zack Bazzi, a longtime friend from his undergraduate alma mater, in fall 2013. At the time, Quilty had just started his MBA journey at Carolina. Bazzi was employed as a consultant with an Iraqi company that implemented projects for the U.S. Department of State. 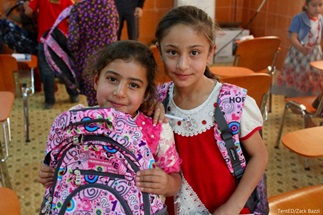 Through his work, Bazzi learned about the challenges refugee families were faced with.

“The conditions in the camps stopped me in my tracks,” he says. “But despite having lost everything, the people I met told me that continuing their children’s education was their top concern.”

But it wasn’t that simple. There was no transportation. The children lacked appropriate clothing and shoes, and they had no school supplies or books.

When Bazzi relayed what he was seeing on the ground to Quilty, the conversation quickly shifted to what they could do to help. As the war in Syria raged on, they launched a handful of low-key fundraising campaigns and shared them with friends and family.

The response was overwhelming. They raised $40,000 in the first year alone – funds which Bazzi used to purchase and distribute clothing, backpacks and school supplies to displaced families living on and off camps. Having found success, they wanted to do more. But to do so, they’d need a scalable way to grow the TentED initiative.

That’s where Quilty’s entrepreneurship education came in. As he learned about different business models in his classes at Carolina, he realized that a partnership model was the most beneficial option. By partnering with retailers of school supplies, TentED is able to get the best prices on goods. Forging strategic relationships with NGOs building schools in Iraq provides the organization with opportunities to efficiently and effectively distribute aid and supplies to families in need while eliminating many of the challenges associated with navigating language, cultural and religious differences in the region. 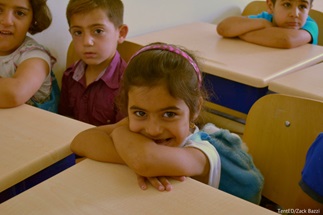 UNC’s social innovation incubator, CUBE, also proved to be an invaluable resource, says Quilty. With guidance from the CUBE team, he developed and optimized the marketing strategy for TentED, focusing on spreading the word through social media and email appeals.

The organization’s lean structure, strategic partnerships and tailored marketing efforts have proven to be an efficient business model, and its all-volunteer team keeps overhead costs low. That means that 92 cents of every dollar raised goes directly toward fulfilling TentED’s mission: increasing access to education.

In 2016, TentED launched a series of project-based initiatives aimed at meeting specific needs in the Kurdistan region of Iraq. Up first: a project supporting the work of World Orphans, an organization that is building a school for refugee children in the Soran district of Iraqi Kurdistan. They set an ambitious goal of raising $12,500 – enough to outfit 10 classrooms with desks, whiteboards, books and other learning materials – in less than two months.

As the initiative gained traction on social media, Quilty realized TentED was on track to meet its goal a week ahead of schedule. The results exceeded his expectations, ultimately raising $15,000 for the school. On September 22, 2016, TentED launched its next initiative – this one focused on funding two months of language classes, art therapy and play activities for 50 displaced Yazidi children who were displaced by ISIS. 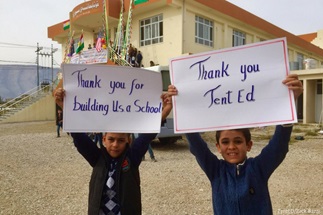 Bazzi and partner organizations like World Orphans share photos and videos via the TentED Facebook page and website, allowing donors are able to see the impact of their support. Seeing TentED’s initiatives come to life is especially rewarding for Quilty. As board president, he devotes a few hours per week helping market TentED campaigns in the U.S. and working on governance structure – time that keeps him connected to the place he served, loved and lost.

“As a soldier, you get to know the people in the communities you’re deployed to. You sit down and share meals,” he says. “Then you go home, take off the uniform, get into business and your life moves on. But the impact that the people make when you’re there is invaluable and persists.”

So does the desire to serve. As an entrepreneur, Quilty is able to continue his mission of making the world a better place. Through TentED, he’s created a lasting way to empower innocent children through education and put them back on track towards a bright future.

Discover what an MBA can do for you.
Our Evening MBA and Weekend Executive MBA programs are designed with driven business professionals in mind. You’ll participate in in-person classes, giving you the chance to build deep connections with your classmates while maintaining a balance between your class, work, and life responsibilities.