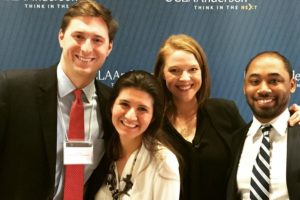 There’s something about Los Angeles. When you land at LAX airport at night, you see all the city lights – and if you’ve been there a few times, you can spot the downtown skyline at a distance. There’s this crazy energy to L. – it’s really hard to describe. The city has a bit of a bad reputation, but the truth is that there are so many sides to LA. It is a city that just lets you be. It lets you dream in a way that no other city can.

Bo Stump (MBA ’17) and I lived in LA for a few years. We both came to UNC Kenan-Flagler with the idea to switch industries because of how volatile careers in entertainment can be. Digital disruption has turned the industry upside down, and I don’t think that will stop anytime soon. But as I went through the recruiting process for other industries, I came to realize that after working in something you really love it’s hard to imagine yourself doing something that is just a job or just a paycheck or because the company is a good name on your resume. It felt a bit overwhelming at the time, though, because UNC Kenan-Flagler doesn’t have a large presence within the entertainment community yet. But the Sports and Entertainment Club is working to change that.

The Sports & Entertainment Club is small and definitely a lot less structured than some of the other MBA career clubs – but that’s really how those industries are. They’re not so much about structure, but about putting yourself out there and being at the right place at the right time. There’s a special element to it, too. You get to form your own path.

Michael Tabb (MBA ’17) and Bo approached me a few times about participating in the 2016 UCLA MBA Media and Entertainment Case Competition sponsored by Paramount Studios. We put a team together with Kelsey Odom (MBA ’17) and signed up.

The case was insanely broad. Our challenge was to figure out how to drive the studio’s business forward in such a disruptive time. The brainstorming sessions were so much fun. We worked on this for days, even through a snow storm. I have a blackboard in my apartment that covers my entire kitchen wall and we kept running out of space every hour or so. I think that was when I realized I had to go back into the entertainment industry. I’ve done a few case competitions before, but I just had so much fun with this one. I think that’s the difference between doing something you love and something you don’t. When it’s something you love, it just doesn’t feel like work in any way, shape or form.

In the case competition, we happened to be in a room competing against one of the teams from UCLA in the first round. That made me a little nervous, but our idea was good and we delivered it with a lot of passion. They ended up changing the rules for our room – letting two teams from one room move forward – and we advanced through along with UCLA.

The final round came down to UNC Kenan-Flagler and teams from UCLA, CBS and MIT. I kept thinking about the fact that the studio executives we were presenting to probably didn’t even have UNC Kenan-Flagler on their radar before then. The fact that we were competing head-to-head against these top programs and gaining huge exposure to the media industry made me so proud of what we accomplished.

CBS ended up taking the big check. We felt disappointed for a second, but when I thought about the fact that we got all the way to the finals – beating out teams from USC, Booth, Haas, Olin and Tepper – I was amazed by the way we represented UNC Kenan-Flagler. Soon after the competition, I got an email from Paramount asking for my resume. I think that’s what most of these case competitions are about – getting exposure that you otherwise wouldn’t be able to. That’s exactly what we accomplished for ourselves and for UNC Kenan-Flagler. It feels like a solid first step in building our School’s brand within the industry.

My one key take away from this experience is to find something that you can so effortlessly do with a passion. It makes everything so easy. There’s no stress or anxiety or exhaustion attached to it. For me, it was the journey – not just the end result – that brought me so much joy. I had forgotten what that felt like – it’s so fulfilling.