There is a game-changing shift underway in real estate. If I had a dollar for every time I heard “live-work-play” used in a meeting or presentation, I could quit this whole business school thing and go straight into retirement. But behind this overused buzzword is a significant trend that’s not to be ignored: walkable urban places will drive tomorrow’s real estate industry and economy.

I interned with The JBG Companies, where I spent a portion of my time researching public spaces. In urban and suburban development projects alike, JBG considers open public space a key ingredient in delivering walkable projects that enhance communities and create value. It can be difficult, however, to quantify something as fundamentally qualitative as public space and what makes one place more successful than another.

After some digging, I based my research around five key attributes of public space: scale, features, funding, operations and value.

Here are the major takeaways from each category.

Scale
Less is more. County officials will often push for more open space thinking that bigger is always better. However, it is often the small, intimate public spaces that create the best urban experiences. Some of our nation’s most treasured public spaces are quite small and owe much of their success to their limited proportions (think New York’s Paley Park, Pittsburgh’s Market Square and Savannah’s famous downtown squares).

Features
Trends in public space development show that water features are key. From a splash pad to a fountain, almost every successful project incorporates some element with water. Providing dog-friendly areas, integrating public art and attracting food and beverage merchants are some of the other features many projects point to as elements that translate into success.

Funding
Initial funding for public space can come from a variety of sources. Funds from government entities and private developers, as well as philanthropic donations, are the most common. Communities are increasingly relying on public-private partnerships to initiate significant new development of public space.

Operations
New York’s Bryant Park is the poster child for modern public space operations. The park is run by a not-for-profit management company and a business improvement district (BID). Its $3M annual budget is sourced through brand revenue, rent revenue and private property owners of neighboring buildings. It takes in no government donations.

Many new parks are now trying to emulate this model. Canal Park in Washington, D.C. has been quite successful in this pursuit thanks to public-private partnerships with companies like JBG, as well as the creation of BIDs. 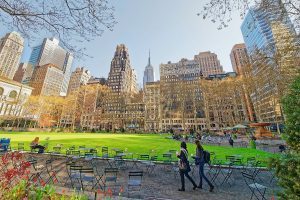 Value
Again I will point to Bryant Park, as the unique nature of the changing public space without significant change in surrounding properties makes it a well-controlled case study. Buildings on the open area’s perimeter garner 12.5 percent higher office rent when compared to similar buildings within a few blocks. This rent premium translates into property values 20 to 25 percent higher on average.

Overall, public space is clearly a value-add. Property owners, developers and investors are willing to pay a premium for proximity to public space.

Quality is important. There is a strong correlation between the quality of an open space, its usage, and assessment of value.