We’re on a journey.

At UNC Kenan-Flagler, and in the Undergraduate Business Program, we are on a journey to include diversity, equity and inclusion in all we do. That means we are building understanding across our differences, creating conditions to ensure equitable educational and social benefits, and cultivating a supportive environment so every member of our community feels valued and has opportunities to add value.

These beliefs guide us to ensure we keep moving forward on our journey:

Our partner organizations support and promote our efforts to recruit a diverse and inclusive community. Programs are offered for students in middle school and high school and students who are newly admitted to UNC-Chapel Hill.

Student-led DEI clubs and organizations shape our community and offer valuable leadership, networking, career and social opportunities. The Minority Business Student Alliance, Carolina Women in Business and Undergraduate Pride@KFBS are examples of the many organizations that you can get involved in.

To support diverse populations on campus and beyond, Carolina offers training programs for faculty, staff and students to develop insights into what we can do to support and to better understand each other. They address a wide range of topics, including issues for first-generation college students, students with military affiliation, and sexual or interpersonal violence.

Building skills and knowledge in class

From orientation to for-credit courses to workshops, events and guest speakers, we are committed to preparing you to understand, negotiate and address complex DEI topics. Several core and elective courses explore these topics at the individual, team and institutional levels.

Ensuring global experiences for all

We want all students to have the opportunity to be transformed through studying business abroad, experiencing other cultures, and to become a global citizen. The UBP Global Programs office is here to support you at every step of your learning journey, including connecting you with resources at Carolina and beyond to support you.

Meet members of our community leading the change we need to build a just world.
(Select a photo to read profile.) 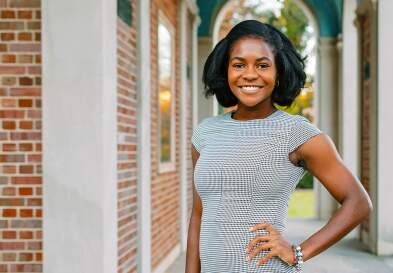 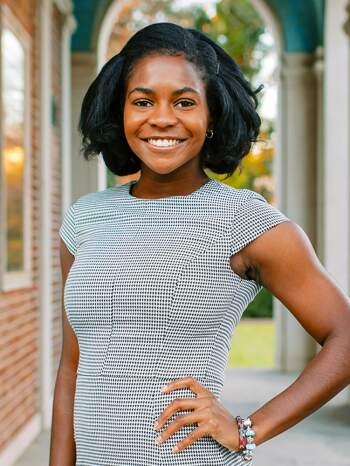 Soccer and UNC have been top priorities Brianna Pinto (BSBA ’22) since she was a little girl.

Attending UNC for college was always Pinto’s first choice. “I felt I’d get the best of both worlds – athletics and academics,” she says. “Right now, I’m living the dream.”

Her leadership on the field and desire to “collaborate, brainstorm and work to get things done” were a good fit for business.

A highlight of her college career was her first chance to play Tar Heel soccer. She scored a goal that was the 1,000th win for Coach Anson Dorrance – the same coach who recruited her father to play at Carolina.

She’s making another dream come true: to become a professional soccer player. In January 2021, she entered the National Women’s Soccer League (NWSL) draft as the No. 3 pick and was selected by Sky Blue FC in Harrison, New Jersey.

She’s a star in the classroom, too. She’s focused on marketing, and is a member of the Minority Business Student Alliance and the Undergraduate Real Estate Club.

In 2020, Pinto and four running mates won seats on the U.S. Soccer Athlete Council. They campaigned as Next Gen United on the platform that soccer should be for everyone. They want to dismantle barriers that have historically prevented women, minorities, low-income kids, people with disabilities and immigrants from playing the world’s game as part of U.S. Soccer.

Brianna is all things awesome,” says Jackie Fritsch, UBP assistant director of admissions and scholarships. “In addition to being a world-class athlete, she is an effective advocate for women and minorities. She is a leader on and off the field, here at UNC, throughout the U.S. and across the globe.” 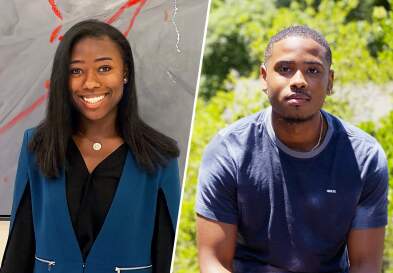 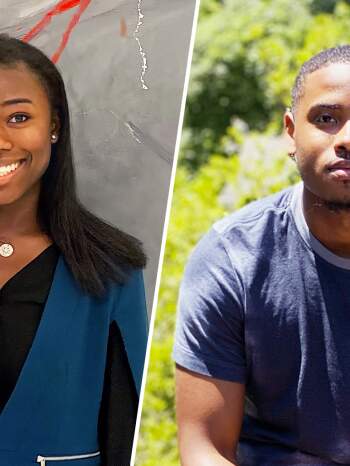 The summer before their senior year Jasmine Marshall and Xavier Nonez (both BSBA ’21) put their leadership skills to work to help the UNC Kenan-Flagler community understand and address systemic racism after the murders of Aumaud Arbery, Breonna Taylor and George Floyd.

As co-presidents of the Minority Business Student Alliance (MBSA), they organized and led the UNC Kenan-Flagler Undergraduate Business Program (UBP) community in a conversation about race, racism and current events in the U.S.

“The tragedy that occurred in Minnesota and the tragedies that have persisted for centuries throughout the country have left many people in my community feeling overwhelmed, exhausted and discouraged,” says Marshall (BSBA ’21). “During times like these, it’s important for us to educate ourselves, learn from each other’s perspectives and work to create an anti-racist and inclusive world, starting with our community at UNC Kenan-Flagler.”

“Discussing the events and systems that shape our lives today is an essential step for building a better tomorrow,” says Nonez (BSBA ’21). “We also know that discussion is not enough, so hoped the conversation would leave the community feeling hopeful and well-resourced for action.”

The conversation also was hosted by Jessie LaMasse and Andrea Prego (both BSBA ’21) of the UBP Community, Equity and Inclusion Board, which was facilitated by Professor Allison Schlobohm. Students were joined by faculty and staff who came to listen and learn.

The students shared how to have a safe conversation, take care of yourself and others, learn more about racism and how to get involved to help end it. 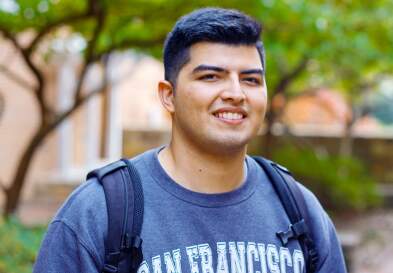 From Carolina to Cisco 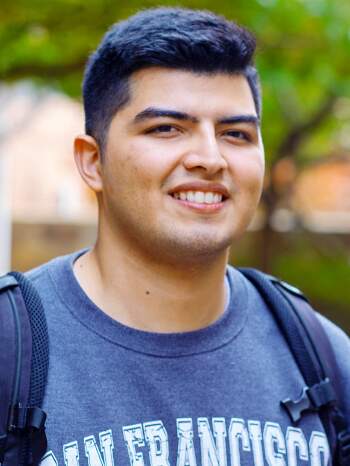 At his graduation, Bryan Hernandez (BSBA ’19) celebrated the people who helped him get there — classmates, professors, mentors and, especially, his parents.

“They gave up everything so we had the chance to go to college,” he says.

Hernandez had put in his own hard work to reach that day. He knew he wanted to be a Tar Heel, but when he wasn’t admitted to Carolina as a senior he took advantage of the Carolina Student Transfer Excellence Program. He completed his general education requirements at Sandhills Community College and was accepted at Carolina as a junior.

Hernandez took advantage of every opportunity at UNC Kenan-Flagler to prepare for his next journey in life: a position at Cisco. It began with a career trek to meet with tech companies in San Francisco. One of those firms was Cisco, and Hernandez leveraged that trek to land a summer internship – and then a full-time position.

He plans to help other Carolina students like him in the future. “I didn’t get in the first time, so it’s knowing that if you persist, you can accomplish what you want to,” he says. “I found a different way in and then managed to get into the Business School and got a well-rounded education and a job.”

His advice? “Just pay it forward,” he says. “All those people that helped me – students who helped me with studying or with classwork, all the alums – helped me get to where I am today. Any time someone from Carolina reaches out, it will be nice to reach back out to them because I know what it was like being that student who wanted to learn more about a certain role or a certain company. So, pay it forward whenever you get the chance to.” 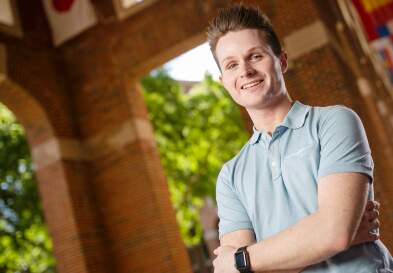 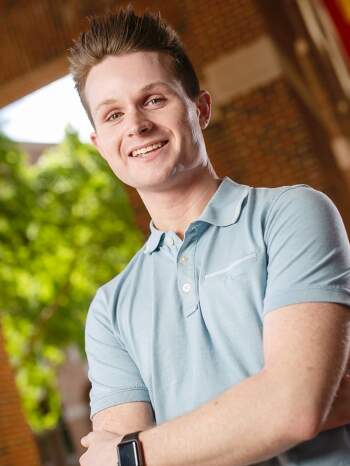 He put DEI at the top of his priority list. He knew many people outside the Business School think of it as a homogenous community. He wanted to dispel stereotypes and show the diversity of a modern business program.

“I wanted to make sure people felt at home,” he says. “They didn’t just go to class and then leave. They don’t have to put on a face or put on a suit to go into the Business School.”

To start, he revamped the Undergraduate Business Program (UBP) Pride Club. “I saw a void for the LGBTQ+ community in the program,” he says. He increased visibility, enlisted allies and brought people together to make big change. He and a classmate transformed the UBP’s diversity and inclusion committee, and elevated the conversation to address structural problems for underrepresented communities.

The most visible result of his work are the LGBTQ+ flag and other diversity flags at the School.In his advocacy for displaying the LGBTQ+ flag, his efforts grew to include Native American, Pan-African, military and Peace Corps flags.

The flags “reaffirm the values of our community and share these values with visitors and the rest of campus,” Strickland says. “We are sending a message that studying business isn’t just for one type of person, and adding to our School’s diversity allows us to include even more top talent and future leaders.” 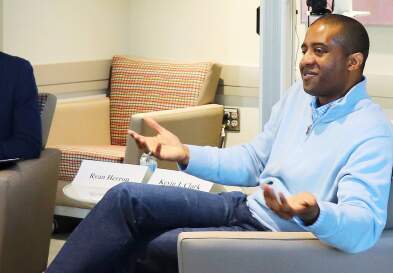 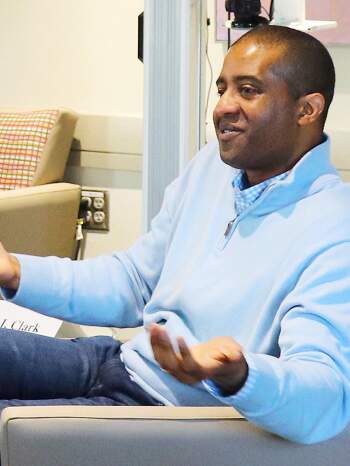 Kevin Clark (BSBA ‘89) is head of strategic transformation for marketing and communications at LinkedIn. He credits UNC Kenan-Flagler with giving him an edge in his career that includes a wide range of roles at IBM, Sears Holdings Corporation, Home Depot, EY and Facebook. He’s known as a thoughtful, strategic leader who builds consensus and tracks impact.

He’s making a difference as a trusted advisor at UNC Kenan-Flagler. Committed to improving higher education, he serves on the Board of Advisors, previously working on the Business Partnerships Committee and now on the Diversity, Equity and Inclusion Committee. He is impressed with the School’s desire to keep improving and its focus on genuine attention to student needs.

“My purpose in life is to help individuals and organizations reach their respective potentials,” he says. “To be able to do that for UNC Kenan-Flagler means a lot.”

Clark mentors students to prepare them for MBA and college programs. He serves on the Gifted Education Foundation board to support first-generation college graduates and marketplace leaders from low-income communities across America.

At LinkedIn, Clark is transforming the operations of the marketing and communications department to be more effective and efficient. Developing professional relationships to help people reach new heights is a priority. “Your biggest asset is your people,” he says. “If you don’t optimize them, you don’t optimize your organization.” 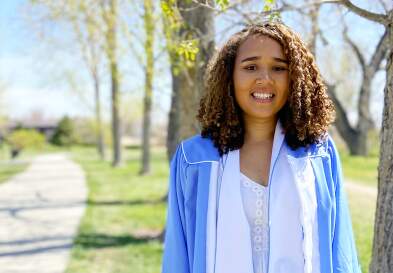 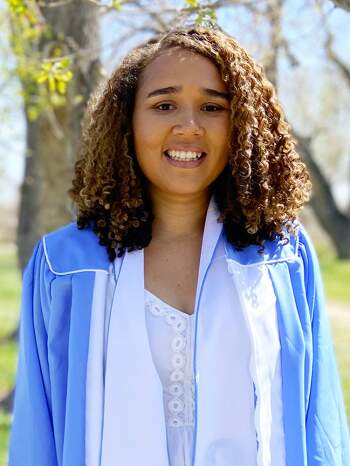 That purpose drove her during her time at UNC Kenan-Flagler and to her career path.

Her studies took her to Dubai on a Global Immersion Elective – “an experience unlike anything you can imagine.” But because it could be improved by making it more inclusive, she went to work for the Undergraduate Business Program as a global program specialist, digging into how to build inclusive, cross-cultural experiences, and later worked as an assistant wellness specialist.

These experiences marked the beginning of Vickers’ exploration of higher education and the process by which faculty and administrators guide students to take risks as they explore their careers.

Now she is taking what she’s learned and experienced at UNC Kenan-Flagler into her role as a Carolina College Advising Corps advisor to first-generation, low-income and underrepresented high school students in North Carolina.

As a woman of color, Vickers took some time to find her own support system. At UNC Kenan-Flagler she sees a community committed to increasing diversity and inclusion. It is a community defined by people like her: those willing to put in the work to support each other towards positive change.

Ultimately, if it recreates this kind of support for only one student, that would be enough, she says.

“I’m leaving UNC Kenan-Flagler knowing that I had such a strong community here, and I learned so much about higher education and business, and about myself – that’s extremely valuable,” she says.

She is excited about all that she’s learned and will use it to “hopefully change someone’s life.” 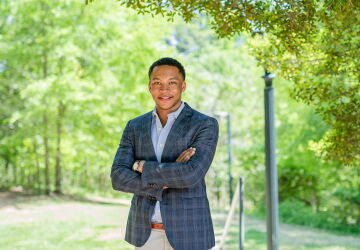 By helping others succeed, Drew Acquaye (BSBA ’22) forged his own success story at UNC Kenan-Flagler 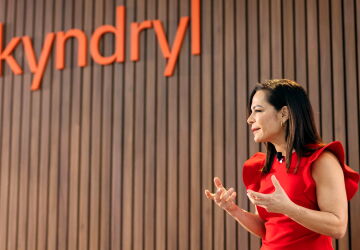 Painting her own canvas 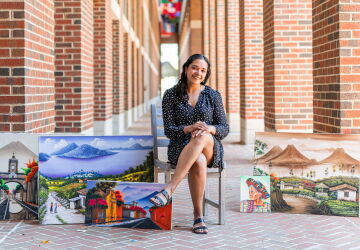 Anna Manocha (BSBA ’22) came to UNC Kenan-Flagler not knowing exactly where her journey would take her. She’s amazed by where it did.