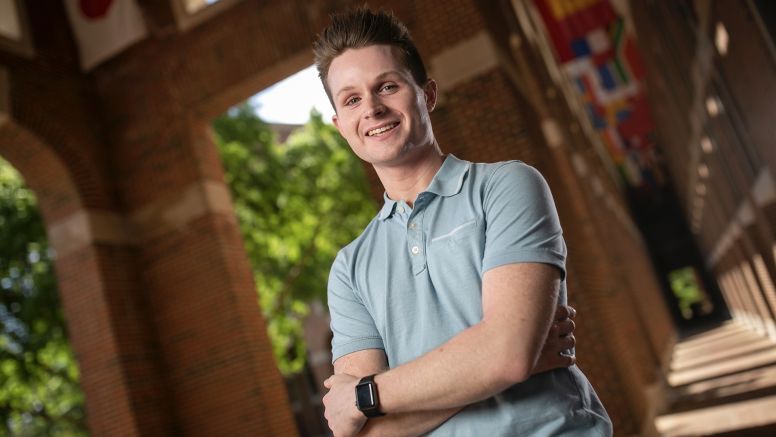 Like many first-year college students, Graeme Strickland (BSBA ’20) wasn’t sure what he wanted to do with his life when he left his home in Greenville, North Carolina, for Chapel Hill.

He had a vague idea about pursuing public policy, but friends talked up UNC Kenan-Flagler Business School. They told him about all the experiences and opportunities the School provides, so he applied to the Undergraduate Business Program (UBP) and was accepted.

“Being in the Business School means that if you want to pursue an opportunity, it’s there for you,” says Strickland. “You just have to go for it.”

And while Strickland went for it – from rigorous academics to global studies – he also made sure UNC Kenan-Flagler was even better when he graduated.

One measure of the results of his impact are the honors he received: the UNC-Chapel Hill 2020 Diversity and Inclusion Award, UNC LGBTQ+ Center’s 2020 Advocacy Award, and the Algernon Sydney Sullivan Award, a UNC Chancellor’s Award, for demonstrated unselfish interest in human welfare and humanitarian contributions.

Strickland also received the UNC Kenan-Flagler 2020 Undergraduate Core Value Award in Community. “When Graeme sees injustice or unfairness, his brain activates and he starts putting pieces of a puzzle together in order to mitigate it,” according to award citation. “He is relentless when it comes to our community and won’t stop until he feels that puzzle is complete.”

Before all those accomplishments, he was just a student trying to set goals. Driven by his desire to fit in at a school dedicated to business – and help his classmates to do the same – Strickland took actions to make big change.

He knew many people outside the Business School think of it as a homogenous community. He wanted to dispel stereotypes and show the diversity of a modern business program.

To start, he revamped the UBP’s Pride Club. “I saw a void for the LGBTQ+ community in the program,” he says. “I wanted more than meetings. I wanted front-facing events. I wanted to bring in allies, too.”

And so he did. For example, the group held an Out and Proud Day replete with a rainbow balloon arch. The event and others increased visibility and made people aware of the community’s diversity, coming together to make big change. “You saw a cultural shift on speaking out on these issues,” says Strickland.

Strickland’s passion was evident, and Anna Millar, UBP assistant dean, paired him with Diamonde Henderson (BSBA ’19). Together, they transformed the UBP’s diversity and inclusion (D&I) committee, and elevated the conversation to address structural problems for underrepresented communities.

Strickland was strongly committed to have the LGBTQ+ flag at the School. As part of a campaign, he researched how other schools display flags, persuaded School leadership, and involved students in the MBA and MAC programs, staff and faculty, getting more than 500 signatures of support.

The effort grew and became even more inclusive. In the end, the School hoisted the LGBTQ+ flag along with Native American, Pan-African, military and Peace Corps flags in Loudermilk Lobby in front of Koury Auditorium.

“The addition to the flag display reaffirms the values of our community and share these values with visitors and the rest of campus,” Strickland said at the dedication ceremony. “We are sending a message that studying business isn’t just for one type of person, and adding to our School’s diversity allows us to include even more top talent and future leaders.”

The D&I committee launched big events to increase important conversations. For example, an event with the theme “Endeavor” encouraged participants to take risks, embrace failure and be true to themselves, and students shared TED-style talks about how they overcame challenges. “This kind of event sends the message about how important these issues are to the School,” Strickland says.

Of course, academics were at the core of Strickland’s experience at UNC Kenan-Flagler. He graduated Phi Beta Kappa, with distinction, and as an Honors Carolina Laureate.

He appreciates the School’s willingness to help him pursue multiple interests. He double majored in business and peace, war and defense, with a concentration in international security and Middle Eastern politics. “I could make my degree what I wanted it to be thanks to the many offerings,” he says.

In a school that values its collaborative culture, Strickland says students experience healthy levels of competition and motivate each other to improve. The faculty also play a significant role.

“The professors are not just teachers or just researchers,” he says. “They give students real opportunities and are very involved. They make a huge difference.”

Coming to Carolina unlocked the world for Strickland. He learned about different cultures and ways of business on study trips to Japan and the West Bank and as an intern at Euromoney Institutional Investor in Hong Kong. He also had a summer internship in New York working at NBCUniversal in SEC compliance and government affairs.

His next move is Washington, D.C., where he will begin his career at Ernst & Young in the government consulting practice. He will look at government agencies to determine their efficiency and whether they are serving the public.

In between graduation and starting his job, he is working on a local political campaign and studying for law school, inspired by an interest in anti-trust law he discovered at Carolina. He’s also interested in corporate activism, which he studied in a course with Dr. Stephanie Mahin. His final project for the class was about Facebook and its threat to society.

Ultimately, Strickland wants to have an impact in the U.S. within government. He is “definitely interested in running for office.”

From the start of his time at UNC Kenan-Flagler, Strickland made a difference, putting diversity and inclusion at the top of his priority list.

“I wanted to make sure people felt at home when they came to Business School,” he says. “They didn’t just go to class and then leave. They don’t have to put on a face or put on a suit to go into the Business School.” For Strickland, now more than ever, all students must be welcomed with open arms and the chance to make their marks.