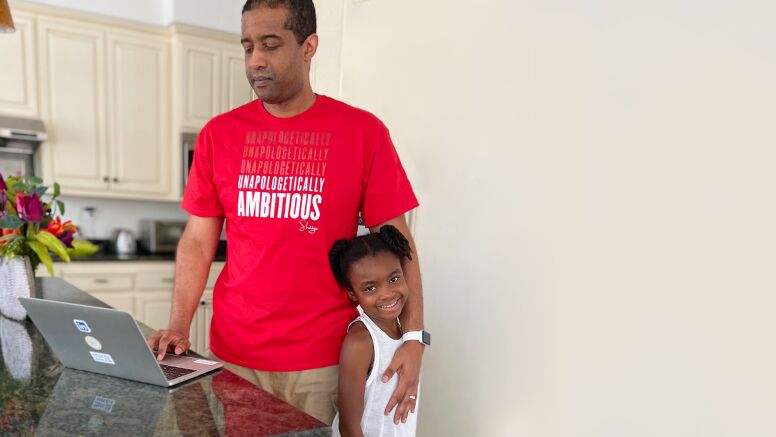 When Kevin Clark (BSBA ’99) was an undergraduate student at UNC Kenan-Flagler Business School, he sat on a bench on campus watching a perfectly aligned team of marching ants. He spent at least 20 minutes in awe as the ants carried food larger than themselves.

“You can learn a lot through observation and questioning,” he says. “How can a single ant carry such large things so effortlessly? Why did the ants choose this route with specific turns? How did they communicate change in direction? Some ants aren’t carrying anything but are still moving in line – what role are they playing?” What about this could be applied in a company?”

It’s these critical thinking and analytical skills that he honed at UNC Kenan-Flagler in the Undergraduate Business Program (UBP). They have served him well through a career that includes roles in sales at IBM, in strategy and operations at Sears Holdings Corporation, in finance at Home Depot, in two stints at EY, in marketing roles at Facebook, and head of strategic transformation for marketing and communications at LinkedIn.

Today he is director of strategic growth initiatives for marketing, communications and strategic partnerships at Inuit in the San Francisco Bay Area. He works closely with stakeholders to identify and drive strategic, operational and organizational initiatives to accelerate growth as a platform company. 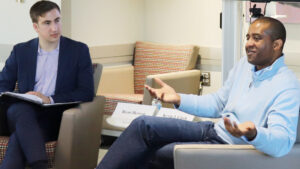 Clark credits UNC Kenan-Flagler with giving him an edge in his career, and he’s become known as a thoughtful, strategic leader. “He doesn’t just see what’s right in front of him, he sees what’s coming down the road and has the vision to see what’s around the corner” while he builds consensus and tracks impact, according to a former colleague.

In 2007, he earned an MBA at Wharton, but UNC Kenan-Flagler tugs at his heartstrings because here he built the foundation for personal and professional success. Clark is deeply engaged in the School’s work.

Committed to improving higher education, he serves on the Board of Advisors at UNC Kenan-Flagler. He also served on the Alumni Council where he advocated for the launch of the School’s innovative online program, MBA@UNC, in 2011. He comes back to campus to speak with students, including the Kenan Scholars and as the keynote graduation speaker for the Undergraduate Business Program’s Class of 2022.

He mentors students to prepare them for MBA and college programs. He served as a board member of the Gifted Education Foundation, which supports first-generation college graduates and marketplace leaders from low-income communities across America.

While at UNC, Clark faced his share of challenges. As one of only two Black male undergraduate business students at UNC Kenan-Flagler, he felt welcome and at home on campus, but he also felt compelled to fit in.

Initially, when thinking about college, his bigger concern was getting out from under the shadow of his high-achieving brother. Clark originally picked the University of Virginia (UVA) as his first choice because his brother, John, was already enrolled at UNC.

“I always loved and looked up to him – still do – but I had to chart my own path,” says Clark.

Sometimes, unexpected events get in the way of your plans. On a dark, dreary day, Clark visited UVA. While listening to a tour guide, he witnessed a person push someone down the amphitheater stairs. He was horrified.

The very next day, he visited Carolina on a sunny, bright day and everyone said hello to each other. Even a construction worker popped out from a manhole cover to greet him and others walking by.

Clark had a positive impression and figured, with 25,000 people on campus, what are the odds of getting his brother’s professors? In the end, Clark appreciated having his big brother with him on campus, despite taking a class with one of John’s prior professors who quickly made the connection, to Clark’s chagrin.

“Shadow or not, he was always my best friend,” says Clark. “Sharing the Carolina experience with him made it even more meaningful.” They took different paths, with his brother going on to become a pediatrician. Clark intended to study psychology, but an economics class persuaded him to consider a different road.

“But all the videos about economics showed old, white men with disheveled offices with papers everywhere,” says Clark. “That’s not me. So, I looked at the Business School.”

Clark applied to the UBP and was accepted into the first class to study in the McColl Building when it opened in 1997.

“I was in awe of the McColl Building,” says Clark. “It was refined, elegant and inspiring. It helped me shift from an academic to a business professional mindset. I loved it.”

His professors encouraged Clark to push himself. He cites classroom discussions that helped him come out of his shell and overcome shyness.

“If I hadn’t gone to UNC Kenan Flagler, I don’t know if I’d have the career that I have now,” says Clark.

Early in his career, while interning at IBM, Clark seized upon an opportunity to reclaim the southeast’s Department of Defense territory, which was an underdeveloped sales opportunity for the company.

“UNC Kenan-Flagler gave me the confidence because I knew nothing of business when I got accepted to the Business School,” says Clark. “After graduating, however, I started to see opportunities in the business world that others could not.”

The risk was a profitable one. With Clark’s help, IBM took those sales from $5 million to $18.5 million in three and a half years.

Through his subsequent leadership roles at Sears Holdings, Home Depot, EY, Facebook (now Meta), LinkedIn, and now Intuit, Clark has maintained a focus on transforming businesses to achieve better outcomes. As part of that, one of his priorities has been making his teams as high performing as humanly possible.

Clark is also known as a compassionate leader. One colleague wrote: “Kevin is the kind of leader who will push you beyond what you thought you were capable of and be there to support you and cheer you on along the way. He’s a big picture thinker and a visionary with enough charisma and grit to get others to rally behind his vision and bring it to life. I was lucky enough to work on one of his projects at LinkedIn, and it has truly been one of the most transformative experiences I’ve had at the company.” 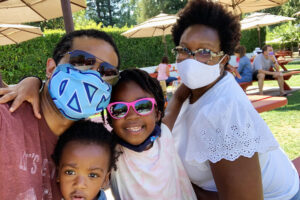 Carolina is a family affair: Clark met his wife Udanda Clark (BA ’99, MAC ’00), a partner at EY, when they were undergraduates. They established the Udanda and Kevin Clark Fellowship in Accounting at UNC Kenan-Flagler in 2020.

They dated briefly while on campus but didn’t get serious until Clark moved to Atlanta in 2003. By 2004, the two were inseparable, but Udanda moved to London, so they continued their relationship long distance before getting married. Today they have two children.

“I fell in love with who Udanda is as a person first,” says Clark. “She’s literally perfect for me.”

Spending time with the family and any alone time with his wife are the sweetest parts of the day, he says. If he can sneak in some non-fiction reading, then he feels he has won a bonus.

“I try to keep learning,” he says.

He is keeping his ties to UNC Kenan-Flagler strong, and he’s making a difference as a trusted advisor through his board service.

Clark is impressed at the School’s desire to keep improving with a focus on genuine attention to student needs. These efforts speak to him.

“My purpose in life is to help individuals and organizations reach their respective potentials,” he says. “To be able to do that for UNC Kenan-Flagler means a lot.”

Read Clark’s keynote address at the graduation of the UBP Class of 2022 here.