Skip to content Skip to Programs Navigation
The magic of Carolina

The magic of Carolina 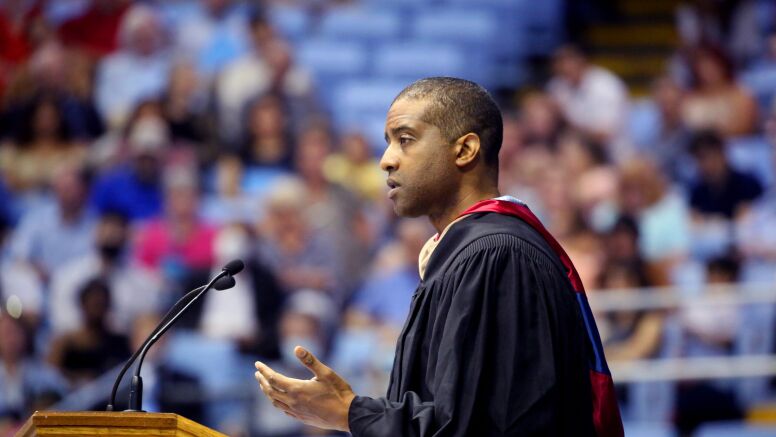 Kevin J. Clark (BSBA ’99), director of strategic growth initiatives for marketing, communications and strategic partnerships at Inuit, gave this keynote address when UNC Kenan-Flagler celebrated the graduation of the Undergraduate Business Program Class of 2022. Read a profile of Clark here.

Thank you for that kind introduction, Dean Shackelford.

I’ll be honest — I don’t really like giving speeches. It’s not what you may think. I don’t have a phobia, I’m not nervous, nothing like that.

It’s because my purpose in life is to help individuals and organizations reach their respective potentials, and formal speeches usually aren’t the best tools to do that.

Why? Because one, they’re generally one-way communication. I talk at you, and some of it resonates, some of it doesn’t because it’s for a general audience, not tailored to each individual.

Two, it takes the focus off of you and puts it on me, which doesn’t align to my purpose.

When I interact with people, I generally like to make it about them, not me. After all, every interaction you have with someone either builds them up or tears them down, either delivers energy or depletes it.

The tough part is that you might not know which it is since you aren’t always aware of what that person is dealing with at that time. So I take these opportunities very seriously – because once that interaction happens, it’s done. There are no do-overs. I ask for your grace as I attempt to deliver the value you deserve in a format that might not be optimally suited for it.

The first thing to understand about me is that I’m an open book. If I have knowledge or experiences that could help you reach your potential, I’m going to share it. Selfishly however, it’s not just because of my purpose, but also because we’re now linked to the same brand: UNC Kenan-Flagler.

The strength and meaning of this brand can either open doors for us or close them throughout our entire careers. It’s therefore critical for each of us to continuously invest in this brand, both directly and indirectly, to ensure doors stay open for all of us. Thus, as alumni, it’s our duty to help those who come after us become better than us – because that’s partly how the brand appreciates over time. I know that’s my duty, and when you walk out of here, that becomes your duty, too.

So for the next 12-15 minutes, I want to share five principles that have helped me achieve both joy and success post-undergrad, and that I think will help you do the same.

But first let me give you a brief background on me, just to provide context. 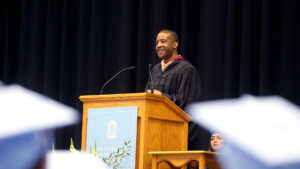 I was born and raised in Montgomery County, Maryland. I am blessed to have two lovely parents, John and Diane Clark, as well as an older brother, John Jr., a fellow Tar Heel, who, besides my dad, is the greatest man I’ve ever known. I followed John to Carolina in ’95, but while John had gone pre-med, I went the business route. By the time I graduated in ’99, I had spent four summers interning at IBM, earned an elite undergrad business degree, and secured a coveted consulting position at Ernst & Young (EY) in Atlanta.

My excitement, however, was short-lived because nine months later I was laid-off, a casualty of an M&A deal the firm closed that year. So there I was: new apartment, new bills, no job. Heck of a shock to the system. Of course I spent a day wallowing in self-pity, but ONLY a day.

I got up the next morning, decided I still wanted to do consulting, and developed a plan to get the necessary skills outside of consulting so I could be a better consultant once I got back in. I figured I needed sales, problem-solving, client management and finance. So I set out to build my skill set – my way.

First, I did sales at IBM for five years. As a client manager, I was responsible for managing the client, understanding their issues, creating solutions for those issues using IBM’s products and services, and then managing the cross-team implementation. I did pretty well in that role — won some awards; made good money; and built some of the skills I needed.

Then I realized I needed to better understand how companies worked – what levers to pull at which time, in which combination, to get which outcomes. I also knew that I needed to understand finance given it’s the backbone of business, but unfortunately it was also my worst, and most feared, subject. So I went to Wharton for my MBA and majored in finance. When I started the program, my goal was to stretch myself beyond my limits.

But when I graduated, I realized I didn’t have any limits to begin with. That’s what changed my career trajectory: full confidence in myself.

That confidence then propelled me forward. I went to Sears Holdings to do operational restructuring for two years — they didn’t listen to me much — and then to a straight finance job at Home Depot for another two years. That then gave me everything I needed to get back into consulting. I returned to EY in 2012, joined the strategy practice, and shot up from senior to senior manager in just under four years. We moved to the Bay Area in 2016 when my wife, Udanda Clark (BA ’99, MAC ’00), made partner in audit at EY.

Facebook (now Meta) reached out six months later asking me to consider building their consumer marketing operations organization. I looked up what marketing operations was, prepared for a few weeks, killed the interview, and took the job. After I built and ran the organization for a couple of years, I moved over to LinkedIn to get a better cultural fit and did strategic transformation there.

Then I was poached by Intuit for the role I have now, director of strategic growth initiatives, where I’m responsible for strategic initiatives across marketing, communications and partnerships that accelerate ecosystem growth and operational transformation. In this role, I actually use every bit of my prior experiences to be successful.

So what do I want you to take from my career journey?

The first thing is that excuses are tools of the incompetent used to build bridges to nowhere.

What’s an excuse, you ask? It’s an explanation to avoid responsibility, not to be confused with a reason, which is just why something happened. For example, an excuse would be, “I haven’t gotten promoted because my manager won’t give me higher-level projects to do,” whereas a reason would be, “I haven’t gotten promoted because I haven’t consistently shown that I can take my existing projects to the next level.” One is unproductive, giving you no path to a solution, essentially putting you nowhere. The other is productive, giving you actions you can take to achieve your goal. See the difference?

Listen: YOU own your career. No one else. Not the company. Not your manager. Not your parents. YOU. You will take your career as far as you decide to. So be thoughtful about your career planning and take it seriously. Because if you don’t, nobody else will.

Now I know you all have endured challenges in college that the rest of us didn’t. And I’m so, so very sorry for that.

However, I’m here to give you the reality about what you’re walking into. I know this sounds callous, but nobody’s gonna care that your college experience was negatively impacted by the pandemic. Care in the sense of giving you a pass on meeting the expectations of your jobs. Why? Because everyone’s life was negatively impacted by the pandemic. Now they’ll be sympathetic, but there won’t be any pandemic asterisk on your annual performance reviews. You gotta do your best, work in a smart way, and deliver results. Focus on the unique capabilities you built as a result of this experience and use those to your advantage at work.

But let me be clear though. BY ALL MEANS, PLEASE take care of your mental and physical health. The mere fact of your being here shows how much potential you have. If you’re struggling with anything, get the help you need to be your best self. You won’t be able to DO your best, if you’re not AT your best, which takes me to the second principle.

There’s no such thing as work-life balance: There’s only life and work either fits in or it doesn’t. This is something that one of my mentors from EY, Chell Smith, always said.

Side note — later tonight, Google her: C-H-E-L-L Smith. She’s a frickin’ force of nature. Anyway, I didn’t really understand what she was saying until Udanda and I had kids. The reason I left strategy consulting for Facebook at that particular time was because Udanda started traveling more as a partner at EY, and two parents who traveled for work just didn’t fit into the life we wanted to have.

Since I had more flexibility than she did, I pivoted to industry where I could still grow my career, but off the road. Since then, I’ve always thought about my career decisions in the context of what would fit in my life. You’d never get a pet that didn’t fit your lifestyle, would you? Why would you do that with your career? It just doesn’t make sense. Feel me?

My dad always told me never to sit in the back row – make your presence known. When you’re in meetings at work, the worst thing you can do is just sit there. You need to engage, as appropriate, in the discussions. You’ll be graduates from one of the top undergraduate business schools on the planet. Suggest ideas, ask good questions, respectfully provide your opinions.

And when it comes to diversity, equity and inclusion, I’ll leave you with what Udanda said at an executive event in 2018: “Silent allies are not allies… they’re just people in the room.” SO SPEAK UP. Okay? Okay.

Alright, here’s the fourth principle: If you want to be successful in business, understand people. Nothing gets done in an organization without people. Every company is made up of people. Tech companies. Healthcare companies. Retail companies. Consulting firms. Banks. All of them. The most important asset any company has is its people, regardless of what they say. Period. It doesn’t matter what project you work on — if you’re not taking the human element into consideration, you’ll miss the mark.

The last principle is this: Tar Heels are family. WE are family. We care for each other. We celebrate each other. We mentor each other. You’re part of a community unlike any on the planet, so don’t take it for granted. The magic of Carolina doesn’t reside among its buildings, books, papers and exams — it resides in our community of people. WE are Carolina. WE are Kenan-Flagler. Our duty, therefore, is to each other. 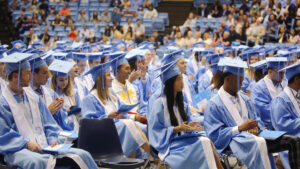 Instead, YOU are going to tell each other what I told you. Everyone stand up. Turn to a classmate or classmates. Look them in the eyes. Raise your right hand and repeat after me:

I promise to never give excuses.
I promise to strive to live a healthy life where work fits in properly.
I promise to make my presence known and to speak up at work.
I promise to treat other people as the critical company assets they are.
And I promise to invest in my Kenan-Flagler Tar Heel community as it invests in me.

Now everyone turn back and look at me. I now end this speech in the only way I find appropriate:

Thank you and congratulations!