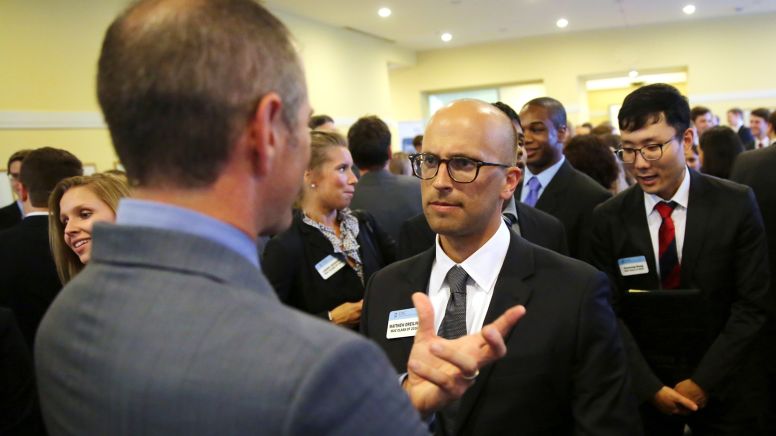 The first term of classes is done, finals are over, and those participating in structured recruiting have the most stressful, yet exciting, week of the program thus far — Interview Week.

Most of the students in the program, in both the on-campus and online formats, participated in Interview Week. Each of us was excited and nervous about getting closer to knowing where we will work after we graduate next year. It’s crazy to think that even though we are only one-fifth of the way through the program, we are already interviewing for positions that we will be starting next fall or later. For some of us, this felt like the most important week of the program. After all, having a job after graduation is something that definitely occupies our minds.

Social events with the accounting firms and other companies started Sunday evening. My first one was with Deloitte. It was probably one of the biggest of the week. It was Casino-Night themed; we gambled with play money as we ate hors d’oeuvres and met with Deloitte representatives that would be interviewing us the next day. It was a fun experience.

The following morning was exciting in its own way. I interviewed with someone from the office where I’m interested in working, and I went out feeling like it had gone well. This was the case with most interviews and the Career Services staff had really helped us prepare. All my interviewers were very personable and I felt like all the interviews went well.

I have to admit that even though my week consisted of just a couple of interviews during the day and socials at night, I was very tired by the end of it. Who would have thought? By the end of the week, I thought I wasn’t going to have enough energy during the interviews, but it’s hard not to be excited when you know that what you’re doing is for your future. The hard part comes now — waiting for the office visits and second round of interviews!