Skip to content Skip to Programs Navigation
A year to remember: 2022 at UNC Kenan-Flagler

A year to remember: 2022 at UNC Kenan-Flagler 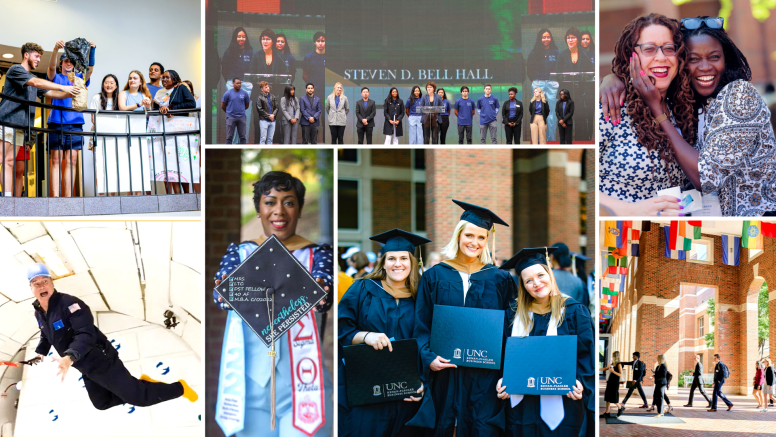 It’s important to learn from the past, but essential to look toward the future.

After pandemic-related uncertainty, UNC Kenan-Flagler Business School got back to even more business in person in 2022 and life at the School flourished.

And it just feels good.

For all that COVID-19 did, this year the School celebrated what it could never do: rattle its foundation and mission to support the leaders of tomorrow who will shape a better world.

Return to (near) normalcy

There’s just something about being part of a sea of Carolina blue in person.

In 2022, non-Zoom graduations returned in full force. While 2021 featured a modified in-person social distanced ceremony, May 2022’s graduation for the Undergraduate Business, Full-Time MBA and PhD programs  marked a return to the more traditional Carolina ceremony. In October, graduates of the Master of Accounting (MAC) and three MBA programs celebrated with classmates, friends and family on campus.

That’s not all that was back. Students in the Undergraduate Business Program (UBP) and MBA Programs again took advantage of a full slate of immersive global experiences. Alumni Weekend returned in person, as did case challenges, competitions and career treks.

Renowned business leaders shared their insights. Major events were back in person, too, including the Carolina Women in Business conference and the Affordable Housing Symposium.

What was most memorable was the renewal of social life. There were the faces and smiles not seen in person for so long, the warm hellos and catch-ups with friends and colleagues.

The School was, finally, back. 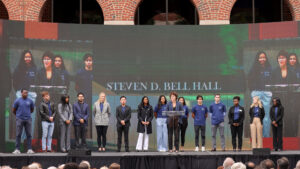 The future is bright

While the return of familiar sights and sounds of campus made 2022 memorable, big changes made it a landmark year.

The transformative $150-million project, funded in part with $25 million pledged by Bell and his wife, Jackie, creates a state-of-the-art, innovative learning environment with a design driven by environmental sustainability. Bell Hall will eventually allow the School to admit 50% more students into the growing UBP while also supporting the MAC, MBA and PhD programs. 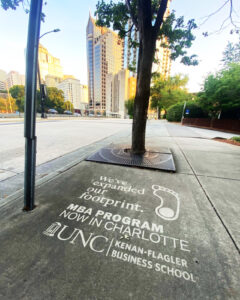 About 140 miles away, another expansion took shape. The launch of the Charlotte Executive MBA Program brought the unmatched expertise of the Business School to the Queen City, with a campus in Uptown’s new Bank of America Tower. The program’s creation inspired a re-envisioning of the Evening Executive MBA and Weekend Executive MBA programs, including a curriculum refresh and new experiential learning approaches.

More to celebrate: UNC Kenan-Flagler met its goal to raise $400 million to support strategic priorities as part of the University-wide $4.25 billion Campaign for Carolina launched in October 2017. Even better, the School reached its goal ahead of schedule and surpassed it. More than 19,000 donors contributed $423.9 million over five years to support new facilities, centers of excellence and faculty hiring and retention.

Dean Doug Shackleford (BSBA ’80), who worked tirelessly to expand access to a Carolina education, announced his retirement in September. He served on the faculty for 30 years and held key academic roles including his eight-year term as dean, when he brought both Bell Hall and the Charlotte Executive MBA Program to fruition in 2022, among other achievements.

“I will work to maintain the considerable momentum that we have achieved together in so many areas across the School,” said Conrad.

A commitment to sustainability

It is nothing short of transformative. A $11 million estate gift from Charles S. Ackerman (BSBA ’55) to the Center for Sustainable Enterprise ensures that UNC Kenan-Flagler remains an influential force in accelerating progress in environmental and social sustainability using business solutions.

In 1999, UNC Kenan-Flagler was the first top business school to offer a comprehensive sustainability curriculum. Major industries continue to weave sustainability efforts into their operations, and alumni work at global impact players like Apple and Nike, as well as sustainability-focused startups and food-production companies.

“Sustainability is a strategic pillar of UNC Kenan-Flagler, and we approach it broadly and deeply,” said Professor Olga Hawn, ACES faculty director. “Understanding the drivers of sustainability strategy and the different ways it is implemented are imperatives for organizations around the world. 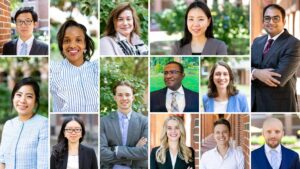 UNC Kenan-Flagler has built its global reputation based on its unparalleled faculty. That tradition of excellence continued in 2022 with new full-time faculty and post-doctoral researchers joining the School’s community.

Among them are experts in the complexities of workplace ethics and behavioral economics. They are researchers providing insight into inter-firm relationships, intersectional stereotyping, and entrepreneurship-driven social and economic change.

Besides being leaders in their fields of research, they all share one thing: a dedication to giving students the well-rounded education it takes to succeed now and in the future. 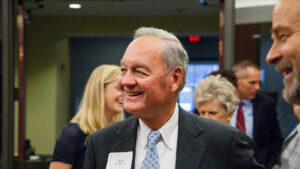 Van Weatherspoon (BSBA ’54), who died in June at 91, was an impressive businessman, but an even more impressive man.

After serving in the Navy following graduation, he started his business career from the ground up, selling television and radio advertising before getting into real estate development. He eventually formed the Weatherspoon Group, started the East Bay Trading Company and founded the Charlotte Museum of History. 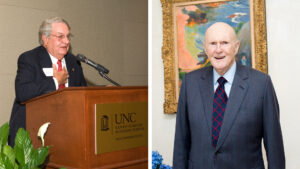 The School lost other vital members of its family this year, including industry titans Charlie Loudermilk (BSBA ’50) and Julian Robertson (BSBA ’55).

Loudermilk was Atlanta’s iconic business and civic leader and founder of Aaron Rents Inc. He was a major philanthropic force in his hometown and at Carolina. He helped fund the School’s McColl Building and he’s the namesake of the Loudermilk Foyer in front of Koury Auditorium. He also supported the Rizzo Center, where UNC Executive Development offers programs in Loudermilk Hall. Loudermilk was 95.

Robertson was called “one of the most influential hedge fund managers of all time,” by the Financial Times. The Tiger Management founder started the company with $8 million. Twenty years later, it was one of the world’s largest hedge funds with $21 billion managed. Tiger Cub Lee Ainslie (MBA ’90), a managing director of Tiger Management before he founded Maverick Capital, called Robertson “a mentor and a friend to so many people who aspire to live up to his example as both a great investor and an extraordinary philanthropist.”

In 2011, the School gave Robertson its Alumni Leadership Award. He endowed a premier fellowship within the Business School’s Full-Time MBA Program, and Carolina’s prestigious Robertson Scholars Leadership program was the result of a $24 million gift from Robertson and his wife, Josie.  Robertson was 90. 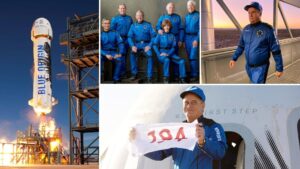 Up, up and away

What do you do when you visit all 193 countries recognized by the United Nations?

If you’re Professor Jim Kitchen, you look up.

Kitchen (BA ’87) fulfilled a lifelong dream in March when he was part of the six-person crew of Blue Origin’s latest space flight, just the fourth manned flight for the company founded by Amazon CEO Jeff Bezos.

The flight lasted just 15 minutes, went 65 miles up at 2,300 mph and then back down at 2,600 mph. When it hit zero gravity for just a few minutes, Kitchen unbuckled his seatbelt and floated around. He will never forget those minutes.

He dreamed of that moment since watching the Apollo missions take off as a child. While at Carolina, a marketing business he began his junior year helped promote a startup selling low-earth orbit space trips. He never sold one, but 40 years later he journeyed to the final frontier himself.

“Sometimes you just lose heart or lose the belief that things like that are going to happen,” said Kitchen. “You kind of give up on them. You shouldn’t.” 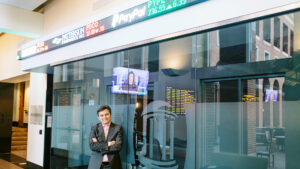 A big reason for the center’s success is its leadership. Pramita Saha, the center’s director of student and alumni engagement, spent more than 15 years in the financial services industry. Professor Ric Colacito, the center’s faculty director, has won numerous teaching honors, including the Weatherspoon Award for Excellence and the MBA All Star Award.

“This is the beginning of the second life of the center,” said Colacito. “We are at a moment when excitement about investment management is at an all-time high.” 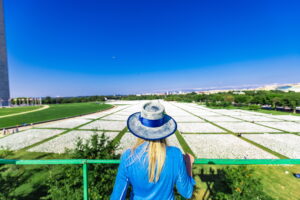 When Suzanne Firstenberg (MBA ’83) created her landmark art installation “In America,” a strikingly emotional reminder of the toll COVID-19 took on our lives, her skills in marketing, business organization and team development helped make it possible.

“I was the right artist to do it because I had the business background,” she said.

Motivated by hearing someone describe the number of COVID-19 deaths as “just a statistic,” she planted 165,000 white flags on four acres to represent the loss early in 2020 for the first installment, “In America: How Can This Happen.”

The second installment, “In America: Remember,” blanketed the National Mall in Washington, D.C., with 660,000 white flags over 20 acres for 17 days. Some flags had messages written by family members mourning a child, parent, grandparent or friend.

Some flags represented two people, such as a couple married for 58 years who died 10 days apart. Strangers visiting the site came together through shared sorrow.

“There was a magic that happened in those flags,” said Firstenberg. “I knew that people would come together and support one another. I knew strangers would comfort strangers. I didn’t realize just how much solace the flags would provide.” 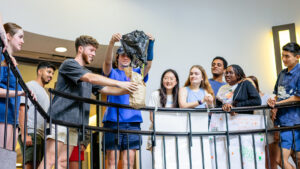 Faculty unlike any other

Professor Barry Bayus has published more than 50 research papers and served as an expert witness when high-tech products are at the center of patent infringement cases.

At the Business School, he’s also known for his egg-drop challenge. Each year, undergraduates in his New Product Development class create innovative ways to drop an egg from the top of the McColl Building’s spiral staircase to the bottom floor so it arrives intact.

It’s a fun tradition that reflects the spirit of innovation and faculty who spend every day providing a business education that challenges and engages the next generation of great business minds.

That spirit was very much alive this year. Professor Saravanan Kesavan launched the Rethinc. AI Management Lab to research ways cutting-edge artificial intelligence will shape the future of business. 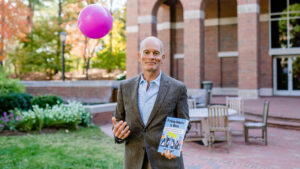 Professor Greg Hohn (BA ’85) published the first-ever book outlining a business course on applied improvisation based on the course he’s taught for over 20 years at the Business School. Professor Christopher Bingham’s book “Productive Tensions” looks at how some of the world’s most successful companies translate internal conflicts and seemingly contrasting goals into true innovation.

It’s all indicative of the range of expertise and unmatched thought leadership found in and out of the classroom every single day at UNC Kenan-Flagler.