Skip to content Skip to Programs Navigation
An exceptional life 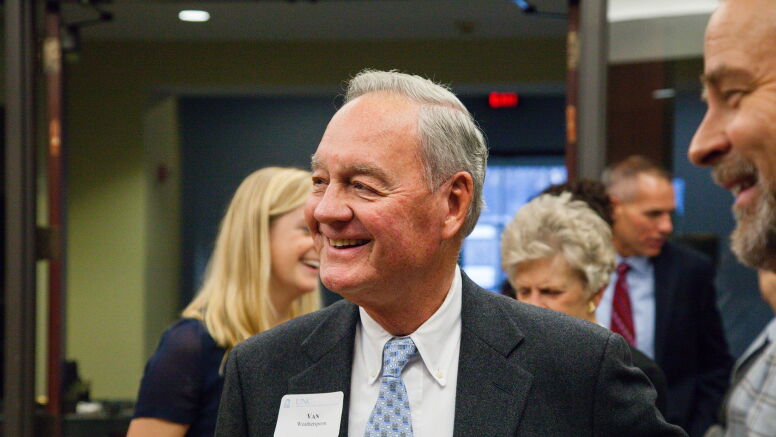 “Poignantly, that is the same day the School celebrated the Weatherspoon Awards, one of the many legacies he leaves at UNC,” said Dean Doug Shackelford (BSBA ’80).

“For 35 years – thanks to the vision and generosity of Van and Kay Massey Weatherspoon, his wife – the awards have honored excellence in teaching, research and service at UNC Kenan-Flagler and remain among the greatest honors faculty and staff can receive.”

The event’s roots go back to 1987 when the Weatherspoons sponsored the first faculty-staff dinner. Rather than support a specific part of the School, they sought to strengthen the entire enterprise – to build our sense of community as we pursue our complex mission. It was our first event of such scope and inclusiveness, with annual events following to become the Weatherspoon Awards event. The message then remains true today: All contributions matter.

“We also can thank Van and Kay for the annual Weatherspoon Lecture Series, which for some 30 years has brought a wide range of impressive people to the Business School so that the campus and wider communities can learn from and interact with them by engaging in interesting discussions and debate,” Shackelford said.

Thinking about the number of people who have attended the dinners and lectures over more than three decades gives you some sense of the Weatherspoons’ impact on our community.

Weatherspoon was born in Durham and educated in the Durham County schools. He and Kay Massey, who he married in 1955, met when they were in high school. Van was captain of the high school football team his senior year and led the team to the state championship and on to play at the Orange Bowl stadium in Miami.

He attended Carolina on a football scholarship, playing all four years and was the first T-formation quarterback in UNC history. In 1951, The Washington Post featured Van in the article “North Carolina Looks To Sophs for Punch,” writing that “canny Coach Carl Snavely is going to depend upon a host of newcomers” who were “no ordinary sophomores.”

After Weatherspoon graduated from UNC, he served in the U.S. Navy on the USS Meadowlark minesweeper from 1954-56. He began his career as a salesman for Procter & Gamble in Birmingham, Alabama. In 1958, the family settled in Charlotte where he worked for WBT selling radio and TV advertising.

He went on to find his calling in commercial real estate. He joined Masten Faison Weatherspoon Inc., in 1966, where the company developed shopping centers and malls across the Carolinas, and, after 25 years, formed The Weatherspoon Group.

The Weatherspoons’ commitment and service to UNC are remarkable. 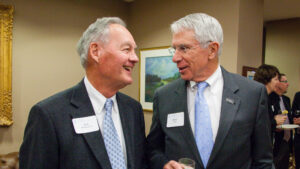 Weatherspoon was generous with his time, too. He served on the UNC-Chapel Hill Board of Visitors and the UNC Kenan-Flagler Board of Advisors, and, until recent years when poor health prevented him, actively participated in the Weatherspoon Awards and Weatherspoon Lecture events.

The UNC General Alumni Association awarded UNC’s Distinguished Service Medal to Van and Kay in 2013. The citation reads: “Where some of us live life as pencils, Kay and Van Weatherspoon appear as indelible ink markers. Where they make their mark, their impact can’t be erased. The Weatherspoons have developed a reputation for putting their time, talent and treasures into projects in which they believe.”

In the early 1980s, the Knox Massey Professorship was created in the Business School with funding from C. Knox Massey, for whom the University’s Massey Awards are named, Van and Kay Weatherspoon, and Knox Massey Jr. and his wife Mary Ann. Jan-Benedict Steenkamp proudly holds that professorship today.

Their support is evident across the University. After the devastating loss of their son, Van Louis Weatherspoon Jr. (BA ’84), in 1989 to a brain tumor, they established the Weatherspoon Eminent Distinguished Professorship in Neurosurgery and the Van L. Weatherspoon Jr. Brain Tumor Program Fund for Excellence at Carolina.

They established another Weatherspoon professorship in pathology and laboratory medicine to honor Nobel Laureate Dr. Oliver Smithies for his discoveries that laid the foundation for today’s research into gene therapy.

They also provided the means for University Libraries to purchase the 20,000-plus Russian books, serials, manuscripts and photographs comprising the Savine Collection, and contributed to the Baddour Leadership Academy. Their support enabled the Bolshoi Ballet to make UNC one of its three stops in the U.S. on a tour, and filled in funding gaps to produce The Rite of Spring. When they noticed that the chancellor’s house badly needed a renovation, they paid the bill.

Quietly and without fanfare, the Weatherspoons helped out where needed. They don’t approach giving solely in terms of what they would like to do. They want to know what would help the School. They’re the most remarkable couple because of their generosity and the way they go about it.

As Jennifer Conrad shared in this video when the School honored the Weatherspoons during the School’s Centennial, with the inaugural Hall of Fame Award in 2019, the couple has enriched the lives of the Carolina community by supporting what is most critical to its success.

My first impression of the Weatherspoons was just how nice they were and how comfortable people felt in their presence. They were giving a very large gift to the School giving us a chance to do all these wonderful things. They kept saying it’s not about them, it’s about the School.

In addition to their support of Kenan-Flagler, the Weatherspoons have made an indelible imprint on the University’s campus including the School of Medicine, UNC Libraries and the arts at Carolina. I think the word that comes to my mind when I think about the Weatherspoons is devotion. They exemplified the School’s values before we had actually put them on a list.

Evans said it best when he learned of Weatherspoon’s death: “Kenan-Flagler has many heroes who have helped through our history. None has been more enduring, steadfast and generous than Van and Kay Weatherspoon.”

Those fortunate enough to have known or met Weatherspoon will not forget his genuine warmth and kindness, and the way he made you feel valued and seen.

Even if your paths didn’t cross, however, he made a difference in your life, said Jeff Terry (MBA ‘90), who worked with Weatherspoon on the lecture series and is campaign director for UNC Kenan-Flagler.

“Van and Kay and their entire family never looked for credit or fanfare,” he said. “In fact, they actively shunned it. They both always led with grace, were the fiercest of champions for our faculty and for our staff. Whether we realize it or not, over the last few decades the lives of all faculty, staff and students have been enhanced by Van and Kay’s quiet generosity and devotion to the Business School.”

Read more about Van Weatherspoon and how to honor him here.