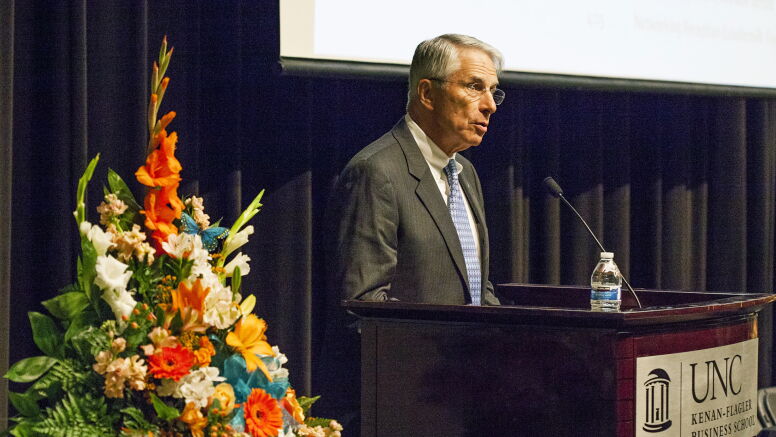 Jack Evans was settling into well-deserved retirement after more than 40 years of service to UNC that included a UNC Kenan-Flagler deanship and two subsequent stints as interim dean.

But when Jim Dean called to ask him to serve a third term as interim dean, Evans answered the university’s call as he had countless times before.

“Jack was a perfect choice based on his experience with and knowledge of the business school as well as the entire campus,” said Dean, who left as dean to become executive vice chancellor and provost at UNC. “He has earned the confidence of all as a capable leader who is always searching for the greater good for the institution.”

Evans first joined UNC Kenan-Flagler in 1970 as an operations professor, a role that prepared him well for the many leadership positions at the business school and the university that he has held over the years.

“His academic background is one of studying processes, and leading for Jack is a process,” said John C. O’Hara, Jr. (MBA ’79), a managing director at Rockefeller & Co. whose MBA diploma bears Evans’ signature. “He seeks counsel, he builds consensus and, once a decision is made, everyone knows that it was a well thought-out decision.”

As dean of the business school from 1979 to 1987, those decisions included launching what became the Executive MBA Evening and Master of Accounting programs and expanding Executive Development to include custom programs. Evans also served as president of AACSB International, the Association to Advance Collegiate Schools of Business, and later led its overhaul of the accreditation process for business schools.

After flourishing for nearly a decade under his stewardship, the School turned to Evans to serve as interim dean in 1997 and again in 2003. His latest stint as interim dean is expected to last until December 2013, when the School’s search committee will report to Dean, who as provost will work with the chancellor to select a permanent replacement.

“It’s a short-term assignment, but it’s one that I hope I can contribute to and help the School maintain momentum that was here on Jim Dean’s last day,” said Evans.

Since he last occupied the dean’s office, UNC Kenan-Flagler has added several new programs, such as the online MBA@UNC and the UNC-Tsinghua Dual Degree EMBA Program, and existing programs have grown in size and stature.

But the School’s essence hasn’t changed since he first accepted the position decades ago, he said.

“Returning to the deanship is both familiar and different. Kenan-Flagler is a bigger, more complex school, but the underlying culture is still the same,” said Evans. “There are foundational parts of our culture, like our five core values, that have always been here, even long before they were explicitly stated.”

While Evans embodies each of those five values, his sense of community and strong ties to the University will be his greatest strengths as interim dean, said UNC Kenan-Flagler professor David Hartzell (PhD ’85).

“Maintaining relationships with the main campus is extremely important for Kenan-Flagler, and given Jack’s many roles over the years, this is one area where he is uniquely qualified,” said Hartzell. “Jack’s been around so long and he’s so highly regarded where ever he goes that it’s just a great fit – especially now with a new chancellor.”

Evans’ long history at the university includes 15 years of service as its faculty athletic representative, two terms as president of the Atlantic Coast Conference and an appointment as interim vice chancellor for finance and administration for UNC. Between 2006 and 2010 Evans also served as executive director of Carolina North, where he coordinated the University’s planning and negotiations with the Town of Chapel Hill that led to the adoption of a development agreement.

Even after his retirement, Evans continued to be involved at UNC. He continues to serve as the chairman of the University Press Board of Governors and on the NCAA Committee on Academic Performance. That ongoing relationship with the university ensured a smooth transition when Evans emerged from retirement to take an on the familiar role of interim dean.

“Once again, UNC went to its most trusted, respected and ‘faithful servant’ to fill a critical need,” said Leo Stephen Horey III (MBA ’90), Evans’ student in 1988, and now executive vice president of AvalonBay Communities. “And now Jack is facilitating a successful leadership transition in his own quiet way – just as he has always done throughout his career.”

But true to his collaborative leadership style, Evans credits his colleagues with the successful transition.

“The staff and faculty of the school are not waiting for me to tell them what to do. They know what to do and they will do it with the same energy and the same direction that they would have done had Jim Dean continued on as dean,” said Evans. “The good thing about this transition is that the corps of people who do the work of the business school is still in place, and all of the things that should happen will happen.”