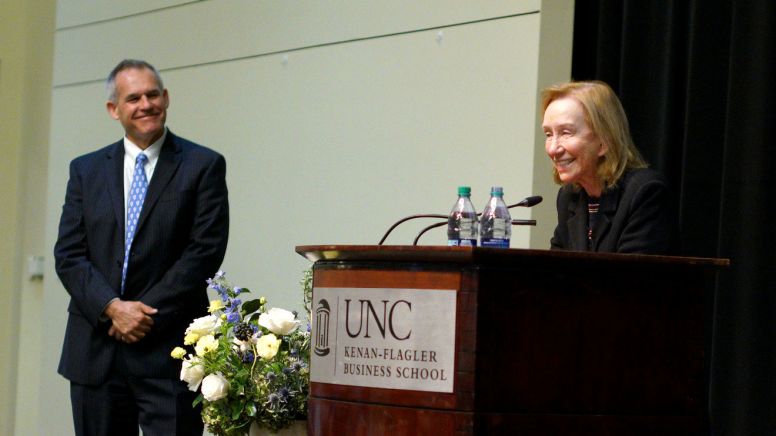 “Are these the worst of times?”

Doris Kearns Goodwin’s answer is an unequivocal “No.”

As a presidential scholar and successful author, Goodwin was a credible source, to say the least, at the annual Weatherspoon Lecture on Feb. 27, 2019.

She cited the Civil War Abraham Lincoln faced, the Industrial Revolution for Theodore Roosevelt, the economic crash for Franklin D. Roosevelt, and the unexpected presidential role in the midst of the Civil Rights movement for Lyndon B. Johnson.

Each situation cried out for leadership and these influential leaders answered. What made them so great? How did they prevail in the worst of times? Goodwin identified traits that made them extraordinary.

Great leaders connect to their people and make efforts to get to know them. Lincoln went to the battlefield to rally the troops. Teddy Roosevelt spent the most time on the road. He talked, listened and waved to the people of America. Johnson reached out to Congress. He met with each member and their spouses, and got to know them on a personal level. He followed up about their conversations and made each member feel known.

Goodwin stressed the importance of successful communication using the platform of the time. Lincoln thought it best to speak in stories because people remember them. Teddy Roosevelt capitalized on the birth of newspapers by using colorful language that captivated readers’ attention. FDR invited himself into the home of Americans through his fireside chats on the radio and many citizens came to refer to him as their friend.

Another crucial ability is knowing when to call yourself out. Lincoln wrote “hot letters” when he was angry with someone. He wrote what he wanted to say in the moment, put the letter in an envelope, and then set it aside, never to send it. FDR faced anxiety and fear after his bout with polio and fell into a serious depression. However, he did not let that defeat him – he worked hard every day with exercises by crawling across the floor. He did not let his pride get in the way and expanded his mind and capabilities.

This is a concept we often ignore, but these leaders made it a priority. They took time to be themselves and to do what they loved. Lincoln escaped by diving into the world of Shakespeare and other great playwrights, attending the theater upwards of 100 times. Teddy Roosevelt loved to exercise, and had a very specific hike route that he called “point to point,” meaning if there was an obstacle he did not go around it. If there was a rock he climbed over it, if there was a puddle he walked through it. FDR started hosting a nightly cocktail
party in the White House during World War II. These parties had one rule: No war talk. It was these acts of relaxation and rest that allowed them to persevere in hard times.

At the end of the day, the presidents knew when to risk it all. They were not cautious or timid in their endeavors. Lincoln saved the union and ended slavery, a feat that no one believed he would achieve. Johnson had only 11 months to serve in the presidency and passed three civil rights bills that no one thought would be passed. Johnson made them his priority, despite constant criticism.

The Weatherspoon Lecture is a great tradition at UNC Kenan-Flagler, and there is no better time to look to our past in order to move forward. Leadership, a core value of our school, is deeply rooted in our nation, as Goodwin so eloquently reminded us.