Skip to content Skip to Programs Navigation
A man in full

A man in full 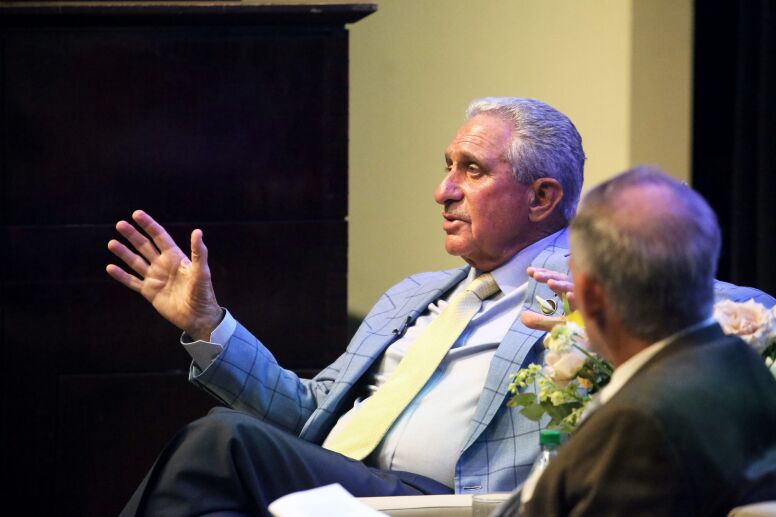 What makes Arthur Blank a success isn’t what makes him successful.

He co-founded the Home Depot in 1978 and turned it into a $50-billion behemoth, leaving the company in 2001 with a reported $1 billion in personal net worth and seeing it grow to an estimated $6.9 billion today. He now owns both the Atlanta Falcons and the Atlanta United FC, as well as the chain of PGA Tour Superstores. He chairs the AMB Group and controls its Arthur Blank Family of Businesses.

Forbes named him one of the world’s 100 greatest living business minds. Sports Business Journal named him the Executive of the Year.

Those facts alone make Blank one of the most brilliant business leaders of the 20th century, but to Blank, true success as a businessman isn’t just about the business. It’s about the man.

That philosophy has always been paramount in his life. He outlined it in his 2020 bestselling book “Good Company” and emphasized it during his 2022 Weatherspoon Lecture at UNC Kenan-Flagler Business School.

“If you have true humility and you really understand that the people you’re serving actually know more about what they need more than you do,” says Blank. “If you just listen to them and pay attention to them and not put your wisdom on top of theirs, you’re going to be successful.”

Blank has never connected his success to solely revenue and profit, but instead to a set of core values practiced for over five decades. They are values that align with UNC Kenan-Flagler’s: integrity, inclusion, innovation and impact.

In “Good Company,” Blank breaks down his own values simply:

When Blank thinks about his life’s biggest successes, he thinks of these numbers: the over $800 million his Arthur M. Blank Family Foundation has made to a variety of causes over 25 years including coronavirus pandemic response, childhood education, voting rights and expanding the National Center for Civil and Human Rights in Atlanta.

He thinks of the $200 million given to Children’s Healthcare of Atlanta, set to open in 2025 and renamed as the Arthur M. Blank Hospital. He thinks about being one of the first people to sign the Giving Pledge, committing to giving away at least half of his wealth to charities. He also thinks about his decision to cut food prices and widen seats at Mercedes-Benz Stadium for all events at the venue.

He thinks about going out into the community and asking people what they want instead of telling them what they need.

Business success to Blank is caring about your employees and customers – and meaning it.

“It’s about how you walk the walk; walk in the footsteps of those people who we’re trying to serve and understand really what’s working and what’s not working.” 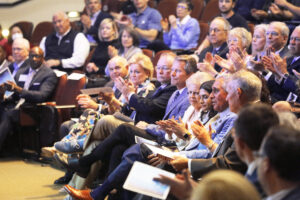 Blank’s talk was the first Weatherspoon Lecture held in person at UNC Kenan-Flagler since the COVID-19 pandemic. The lecture series, funded by a generous gift from longtime supporters Van and Kay Weatherspoon, brings outstanding scholars and leaders from business, government, education and politics to the school every year.

Affable and unpretentious, Blank talked with Dean Doug Shackelford (BSBA ’80) for the first half of the lecture before taking audience questions. He offered his take on the delicate balance of companies honoring tradition and pursuing innovation and gave advice to the future business leaders sitting in the audience about how to turn potentially adversarial business situations into positive relationships.

When he co-founded The Home Depot with friend Bernie Marcus, the stores were half the size they are today. Blank and Marcus grew them, but the company didn’t outgrow its fundamental business values of great service, great assortment of products and low prices, Blank wrote in “Good Company.”

The company also prioritized great relationships with its employees. In 1995, Home Depot associates didn’t have to ask for permission from the corporate office before donating supplies after the Oklahoma City bombing. In 2001, the year Blank retired from the company after serving for over 20 years as its president and then later CEO, Home Depot was named America’s most socially responsible company.

The culture and innovative business model that Blank established at The Home Depot aren’t the only things that continues to make it a success. Blank writes in “Good Company” that financial success follows when companies prioritize the wellbeing of its customers, associates and the communities it serves.

That approach continues to guide everything Blank does. During the lecture, he said that when planning to build Mercedes-Benz Stadium in downtown Atlanta, home to the Falcons and United, he met with the leading pastor of a prominent church in the area. The pastor told him that the community wants a partnership, not just someone who cuts a check.

Knowing that and acting on it, Blank said, is what make a business a real success.

“When you think what that approach and people really feel like you’re truly listening and truly want to be in the same boat with them … and their success is your success, when you feel that way, I think people will share. They’ll work harder. They’ll be a participant.”