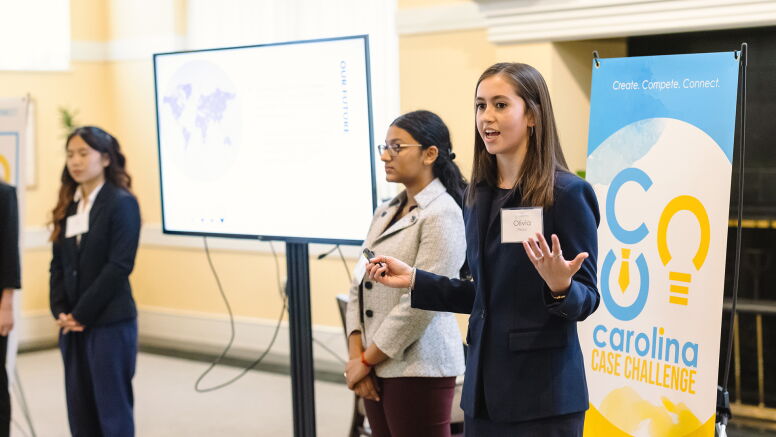 There was one thing Spencer Shores (BSBA ’25) absolutely had to do when he arrived at UNC-Chapel Hill. 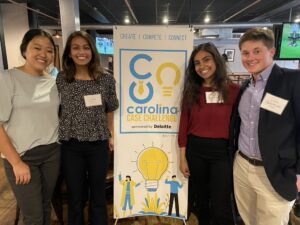 “I was interviewing for a scholarship and was asked what I was most excited for at Carolina,” says Shores. “I didn’t hesitate to say, ‘case challenges.’ The Carolina Case Challenge was something I had my eyes on very early.”

Eleven teams, four students on each, from seven colleges across the U.S. took part in the 2022 competition hosted by UNC Kenan-Flagler as it returned to an in-person format after going virtual in 2021.

It’s not all about competing. Networking opportunities are liberally sprinkled throughout the three days, especially during time with recruiters from the sponsoring companies. 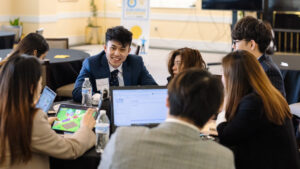 The challenge represents the type of work awaiting UNC Kenan-Flagler students pursuing consulting and the skillsets required to succeed, such as mastering storyboarding and analytical prowess to good, old-fashioned working well with others.

It requires stamina and ingenuity, trust and teamwork, adept problem-solving and thinking on your feet. Oh, and the teams don’t have a clue about the case they’ll be working on until organizers accompany them to a work room and release the case. The eight-hour countdown begins on the second day. From there on, every minute counts.

It’s no wonder case competitions are called the varsity sport of business schools.

“You learn, you have fun, you grow,” says Shores. “That was what I wanted to get out of it, and I ended up getting more out of it than even I had expected. It stays with you.”

In just four years, the CCC has become a distinctive part of the Undergraduate Business Program (UBP) experience. While numerous case challenges are held throughout the year at business institutions around the world, not all include students competing against students from other schools. And not all were created for students by students and remain run by students.

The CCC was created by Jessica Schmitz and Phillippa Owens (both BSBA ’19), who staunchly believed in the educational value of such competitions and wanted to start a case competition that was intercollegiate.

Three months after the two pitched the idea and just two months before Schmitz and Owens graduated from the UBP, UNC Kenan-Flagler hosted its inaugural CCC. To get it off the ground, they worked closely with Amy Bugno, UBP director of career development and employer relations. Bugno has been the CCC’s faculty adviser ever since, supporting a group of students who organize and run the CCC each year. 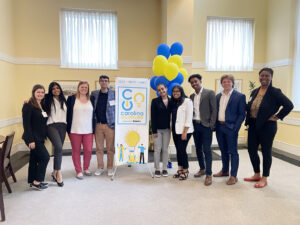 “At UNC Kenan-Flagler, we believe in experiential education” says Bugno. “Throughout the years, our CCC student leaders were motivated to serve because they benefitted from opportunities like this when they were starting out. That’s a mentality that I think is very Carolina. That’s part of the magic of the whole thing.”

After going virtually for its third year, teams at the fourth CCC were able to socialize together and had easy access to representatives from Brex and Deloitte, co-sponsors of this year’s CCC. Bugno says she hopes the CCC will host international business school teams by next year.

CCC’s sponsors change each year, so the business concepts covered by the cases do, too. This year’s case came from Brex, a financial technology company focusing on startup support: “Where should we expand globally: Japan, Brazil or the United Kingdom?”

“This is an opportunity for students to pull from different nuggets of business knowledge they already have but also discover what they still might need to work on,” says Bugno. “You don’t know what the case is going to be, yet you have to be ready. It could be a marketing case. It could be a finance case. It could be a strategy case. It puts all of those things to the test in a very hands-on way.”

The cases in the competition are not hypothetical. Businesses who participate in the CCC carefully consider the solutions offered by the student teams and over the past few years have used the integrated student suggestions into their actual business plans.

“Every client we’ve ever had has given us a real business problem that they are dealing with,” says Bugno. “They come out of the CCC with a dozen ideas that they are able to implement right away. They get an army of business students at their disposal.”

“The highlight of my year” 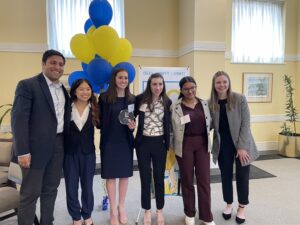 Before this year’s CCC, Olivia Pirouz (BSBA ’25) didn’t know what a case competition was. She was interested in consulting but wasn’t sure if the field was right for her. She said she has no knowledge whatsoever about Brex and the financial technology, or fintech, industry.

For Pirouz, the CCC was a leap of faith. In the end, she was surprised to learn just how much she enjoyed the research and presentation aspects of the competition. She says she now feels more confident in pursuing a consulting career.

“I had no clue what to expect, but it ended up being the best experience, probably the highlight of my year,” says Pirouz. “It was an eye-opening experience. It’s a crucial steppingstone in my business path.”

After the initial round of presentations, judges provide feedback which the top four teams incorporate into a revised presentation on the final day of the CCC. Pirouz’s teammates ended up finishing in second place overall. Her team recommended that Brex set up shop in Brazil for Brex, citing its high entrepreneurship rates and data indicating that is likely the easiest path to more global expansion.

Shores’ team did well, too. It won best slide presentation, but the businesses and professionals who participate in CCC don’t tend to remember which team won what.

They remember students’ names and faces — and their drive.

“This year on the judge’s panel,” says Bugno, “one of the recruiters said to me, ‘I want the names of everyone on this team. I would hire them tomorrow.’”