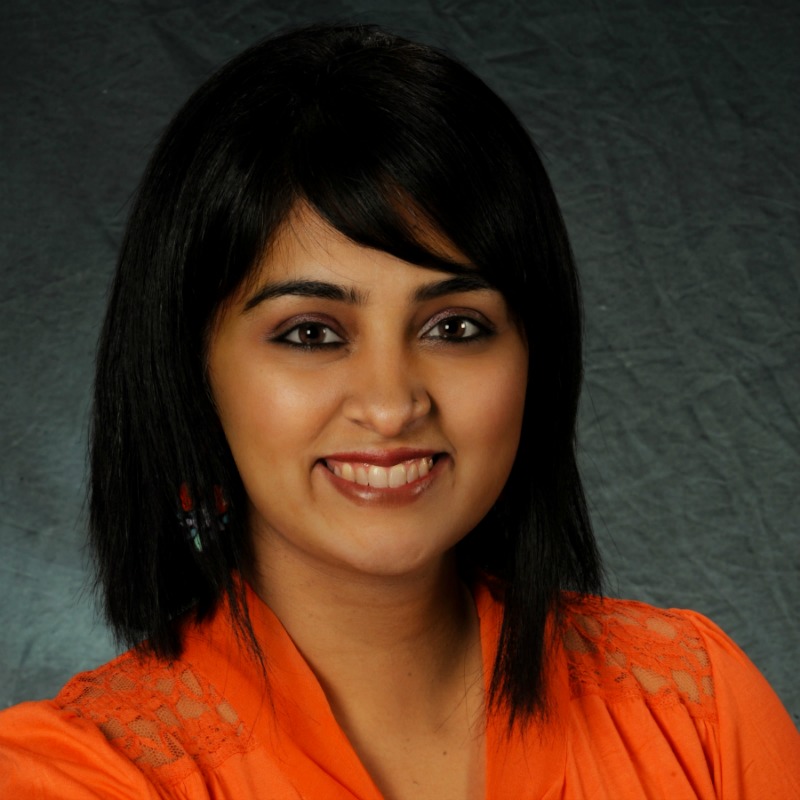 Shimul Melwani felt like an outsider when she started her first job. The company placed her on a team of people who had been working together for a long time, and she felt excluded.

But that all changed when a co-worker shared a bit of gossip with her. She still recalls the “burst of energy and excitement that I felt when I was finally included.”

Her recognition of the positive power of gossip set the stage for an academic journey exploring the intersection of emotions and interpersonal interactions in organizations.

Melwani grew up in Mumbai and graduated with a bachelor’s degree in biomedical engineering from the University of Mumbai. She went on to earn a master’s degree in industrial and labor relations from Cornell and a master’s and PhD in organizational behavior from Wharton.

She joined UNC Kenan-Flagler in 2011 and has already made her mark as teacher and researcher.

“I focus on understanding how emotions and social behaviors like gossip influence our performance and productivity at work,” she says.

Melwani is also studying what happens when friendships dissolve in the workplace, how guilt – especially for women – affects and sometimes holds people back, and the influence of ambivalent relationships or “frenemies.”

She has investigated how emotions such as boredom, contempt, compassion and anger influence performance and relationships in work contexts. Her research has appeared in the Journal of Personality and Social Psychology, Journal of Applied Psychology and Psychological Science, and has been covered by media outlets, such as the Harvard Business Review and Financial Times. 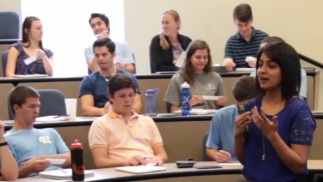 “Organizational behavior research is very, very broad in the way researchers study things,” she says. “Some academics conduct very controlled behavior lab experiments and others are in the field collecting data. I am right in the middle. I combine field data with my lab research, where I tend to do very complex experiments in which I create realistic situations.”

Melwani brings that same mix of data and experiential learning into teaching the undergraduate “Leading and Managing” course and the “Global Leadership: Leading and Managing Across Cultures” MBA class. In both classes she teaches skills needed for career success.

“In my undergraduate class, I help students prepare for success in their first jobs – how to make the right decisions, impress the right people, be a better leader and a better manager,” she says. “The MBA class on working across cultures is focused on helping students learn to be more flexible, understand differences in cultural values and better engage with people from different cultures.”

Melwani is especially passionate about teaching. “I came to UNC because I really appreciated how much teaching is valued here,” she says. “UNC is certainly a leader in academic research, but I also love that you can care about teaching and show it.”

She is gratified, too, by the students at UNC Kenan-Flagler. “We have a group of really smart, but also very humble students, which I think is a very unique combination and not something you find at a lot of top institutions,” she says. “From a teaching perspective, it’s a pleasure to find students who are amazing at everything they do, but also think deeply and are kind and empathetic.”

The admiration is mutual. Her students’ nominations earned her the Tanner Award for Excellence in Undergraduate Teaching, one of the highest campus-wide recognitions for teaching. 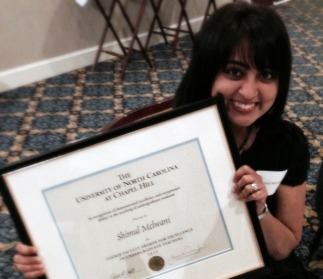 Melwani is “without a doubt the best professor I have had both at Kenan-Flagler and at Carolina,” one student wrote.

Students also lauded her for going above and beyond as a mentor, and for the impact she has had on their lives. “I used to be very shy when it came to approaching professors, but Professor Melwani’s warmth and willingness to help boosted my confidence and has allowed me to not only cultivate a relationship with her, but with other professors at UNC,” another student wrote.

Another nomination mentioned that Melwani’s “continues to be one of my favorite classes that I have ever taken in my career as a student. She made a profound impact on my development as a UNC Kenan-Flagler business student and as an aspiring professional woman of minority descent.”

“I always told myself that I would win one of these master teaching awards before I retired, and so it was really a major career and personal goal I had,” says Melwani. “To win this so early was amazing. I am rarely speechless, but I cannot describe how I felt when I heard I had won the award. I still feel that way when I think about it.”

The award ceremony was one of the best nights of her life, she adds.

“I told my husband that it was better than my PhD graduation, and that is saying a lot because it took me six years to get that PhD.”