Skip to content Skip to Programs Navigation
Late Night Bites: The story of a startup

Late Night Bites: The story of a startup 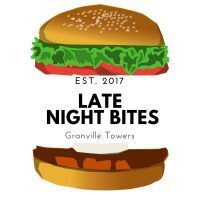 n the Foundations of Business and Leadership class for freshman students pre-admitted to UNC Kenan-Flagler, Shimul Melwani, assistant professor of organizational behavior, wanted to create a team project experience that would introduce them to the myriad aspects of their future business school experience: the vertical capabilities of strategy, marketing, operations, finance and leadership integrated with the essential horizontal capabilities of leadership and teamwork.

She tasked student teams with the goal of starting and actually running their own businesses to raise money for a charity of the winning team’s choice. In October 2017, students pitched their ideas to a set of faculty judges. While all student groups were promised seed funding of $50, they had the opportunity to merit more based on their ability to demonstrate need, potential value and profitability. After receiving their funding, the groups had six weeks to market and sell their services or products.

They had to follow one rule: They were not allowed to tell potential customers and stakeholders that they were raising money for a charity. Their ideas included a hot chocolate bar, an espresso bar, a business selling cookies, muffins, UNC paraphernalia, including condoms, stickers and buttons, and a face-painting service. Together the class raised more than $1,700. Of this, approximately $1,100 raised by two teams that merged to create Late Night Bites. This is their story, told by Mary Laci Motley (BSBA ’21).

When asked to pitch a startup idea to a panel of judges, my Business 188 team considered everything from a smoothie bar to key chains. In the end, we agreed upon a late-night food service outside of campus dorms. Late Night Bites was born and for the next two months, our team pulled all-nighters to satisfy late night cravings of UNC students.

For location we targeted UNC dorms. We set up stations outside of Granville Towers and outside of the south campus P2P stop. Students could pay in cash or by Venmo and one by one grabbed a bite of the action on opening night. The second night of sales slowed because of sub-freezing temps. In response to this dilemma, Late Night Bites went mobile. And to address the scarcity of late night studiers on a Saturday night, we contacted fraternities and drove to sell food at several parties.

In terms of food, we contacted local food vendors to work out business deals that increased our profit margins. The first night of sales we connected with the local McDonald’s operator. In exchange for 300 free burgers, we agreed to advertise McDonald’s partnership with Uber Eats and offer discounts to students who downloaded the app. We sold cookies, donuts and burgers the first night of sales and profited $700.

This partnership proved not only beneficial for us, but also for the local McDonald’s as well. The Franklin St. McDonald’s we partnered with is currently the lead Uber Eats operator in the region, and has credited much of their success to our advertisement. In response, McDonald’s corporate reached out to our team and featured Late Night Bites in the regional corporate newsletter.

The next week, we changed merchandise from burgers to pizza. I contacted every pizza place within 30 miles of UNC and hand delivered donation requests to six different pizza places. We received 27 free large cheese and pepperoni pizzas from Papa Johns and Dominoes in the Chapel Hill and Durham area. We sold by the slice and profited more than $400 the second night of sales. From this, we learned reaching out can be extremely beneficial. 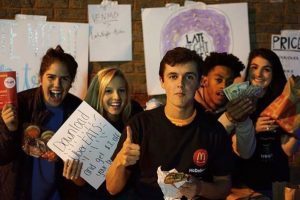 As for dedication, our two groups of 12 worked tirelessly, pulling all-nighters on both operational days. Communication was key to successfully operate and complete presentations. From the start, we set a goal of $1,000 and would not stop working until we reached it.

A key component that helped us reach our goal was marketing. We created an Instagram page (@late_night_bites) that was a vital platform used to promote the business. More than 300 people followed the page before opening night. Through social media, a local startup app BlipMe discovered our business. Founded by UNC Kenan-Flagler graduates, BlipMe aims to bring the community together by sharing events going on daily at UNC. BlipMe offered to promote Late Night Bites for our initial launch, and we were featured on the app. This partnership stressed the importance of social media as a great platform for networking and spreading news.

From this experience, we gained insight into the dynamics of entrepreneurship. From an initial investment of $100, we profited $1125.40 in just two nights.

The Late Night Bites team agreed to donate the profits to the Inter-Faith Council, a local Chapel Hill organization focused on improving the lives of the homeless and impoverished in the community. We would like to thank Professor Shimul Melwani for giving us this invaluable opportunity to explore and apply her lessons to our startup. Although it was sad to see Late Night Bites go, building friendships, creating memories and giving back to the Chapel Hill community are experiences I will treasure.