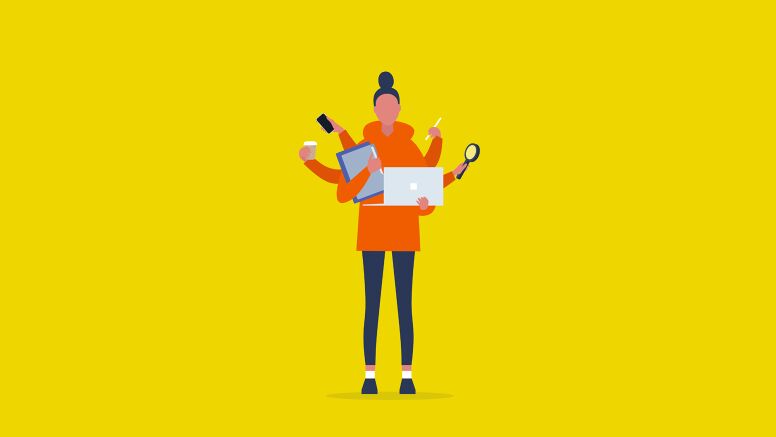 We all know multitasking has a bad name. And research confirms that trying to do more than one thing at a time reduces performance.

But we all keep doing it: Checking email during conference calls, sneaking a peek at our phones while in meetings, jumping from one task to another in quick succession.

Given the enduring appeal of multitasking, Shimul Melwani, an organizational behavior professor at UNC Kenan-Flagler, and Chaitali “Tali” Kapadia (PhD ’17) of Florida International University wondered if there might be an overlooked upside.

Might multitasking actually increase our mental activity? And if so, might that lead – at least temporarily – to increased creativity?

The researchers dug into the subject with a mix of lab experiments and data collection from real-world scenarios — including a reality TV show.

Melwani and Kapadia share their findings in their paper, “More Tasks, More Ideas: The Positive Spillover Effects of Multitasking on Subsequent Creativity” in the Journal of Applied Psychology.

Melwani and Kapadia had two questions to answer. Does multitasking actually increase creativity? And if it does, how does it do so?

To tackle the first question, they conducted an experiment that simulates a common, real-world multitasking scenario. They set up some 240 students in individual cubicles with personal computers, and gave them information about their schedules and roles as student representatives of their university.

After the conference call and emails, students completed two tasks – one testing creativity and the other testing analytical ability. For the creativity task, they asked students to find as many uses for a brick as possible – a common test of creative thinking.

Students who multitasked were more creative, generating significantly more ideas for the brick then those who didn’t. Multitasking didn’t influence their analytical performance.

To get a better sense of whether this relationship might hold true during real-world tasks, Melwani and Kapadia mined 44 episodes of the culinary reality show “Chopped.” Each episode puts four professional chefs in competition to wow judges by making an appetizer, entrée and dessert. The winner takes home $10,000.

The chefs receive mystery baskets of up to five ingredients to incorporate into their dishes, which are evaluated by a panel of judges. The mystery ingredients (such as watermelon, canned sardines, cheese and zucchini) require the chefs to get creative.

Kapadia watched each of the 44 episodes and took copious notes about the dishes prepared. The two researchers then recruited professional chefs to evaluate the degree to which preparing the entrée required multitasking and the creativity of the desserts in the final round.

Sure enough, the more chefs multitasked during the appetizer round, the more creativity they showed in the entrée round – and then again in the dessert round.

But with the multitasking-creativity link clearly established, Melwani and Kapadia still wanted to know why multitasking helps creative thinking when it clearly hinders many other aspects of performance.

Charging up the brain

They began with a model of the cognitive processes that link multitasking and creativity:

Multitasking creates a greater demand for cognitive resources, such as attention and working memory. Our brain activates more resources to meet those increased demands. Once our brain achieves a higher level of activation, it can use that extra energy in different ways because of cognitive flexibility.

The link between activation and cognitive flexibility is well established in prior research. Melwani and Kapadia wanted to understand if it could explain the connection between multitasking and creativity, so they conducted two more studies.

In one study, they engaged 171 students in a business simulation. Like the first study, students participated in a conference call and sent emails. One group did the tasks simultaneously (multitasking), the other sequentially. They also asked students to come up with a single creative idea to expand the offerings of a fictional toy company that was the subject of the conference call. Their ideas were evaluated for creativity.

Along the way, the students were measured on their level of activation and cognitive flexibility.

As in the first study, students who multitasked produced ideas that were coded as more creative. The activation and cognitive flexibility assessments also showed that those two mental states, in that order, led to greater creativity.

The researchers again measured activation and cognitive flexibility, and then had the servers complete a creative task used in other creativity research: drawing a space alien. The drawings can be coded for creativity based on the extent to which they differ from humanoid characteristics.

Again, the researchers found that servers were more creative after multitasking on busier Friday and Saturday shifts, and their creativity was mediated by higher levels of activation and cognitive flexibility.

The research suggests that how we design and schedule our work can impact outcomes we care about, such as creativity.

“They could say, ‘I have some really detail-oriented work that I have to be careful with and that work shouldn’t be multitasked,’” Kapadia says. “But if you know that you’re going to be doing something that’s a little bit more creative, then getting yourself energized through multitasking, taking care of some of those other tasks, might be helpful.”

Their findings suggest that we can be more balanced in how we think of our multitasking, says Melwani.

“Everybody multitasks and we’re made to feel bad if we admit to doing it,” she says. “This research gives us that little bit of flexibility to say, ‘There are some tasks I have to be careful about, but there also are benefits to multitasking.”