Not seeing the good ideas? 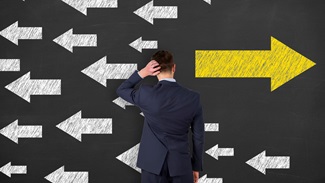 You might call it “the one that got away syndrome.”

When J.K. Rowling’s literary agent was shopping around her first Harry Potter novel, he received a dozen rejections before the book was finally accepted for publication. Since then, of course, Rowling’s tales of youthful wizards have become international bestsellers and spawned a series of big-budget films.

The publishers that rejected “Harry Potter and the Philosopher’s Stone” more than 20 years ago probably regret their decision now. But, to be fair, how could they have known better?

Rowling isn’t the first bestselling author whose books were rejected before becoming bestsellers. And this pattern holds in other fields, too. From consumer package goods to pharmaceuticals, companies struggle to identify which new ideas are the most creative – both novel and practical.

Some of the world’s most valuable companies, such as Apple, Google parent Alphabet, Facebook and Amazon, were built on creativity. Firms that are better at identifying creative ideas – those ideas that are both novel and useful – are likely to have a significant competitive advantage. But sorting good ideas from bad is tough.

Shimul Melwani, associate professor of organizational behavior at UNC Kenan-Flagler, and her colleagues have identified factors that could make decision makers less likely to identify creative ideas. That, in turn, could restrain innovation by causing them to overlook some ideas and put too much stock in others.

“The biggest question has always been ‘How do we set up organizations and cultures and people to help people generate creative ideas?’” Melwani says. But there’s almost no research on what happens to those ideas and why some are implemented and others aren’t.

Melwani, along with Jennifer Mueller of the University of San Diego, Jeffrey Loewenstein of the University of Illinois, Urbana-Champaign and Jennifer J. Deal of the Center for Creative Leadership, published “Reframing the Decision-Makers’ Dilemma: Towards a Social Context Model of Creative Idea Recognition” in the Academy of Management Journal.

They posit that people in decision-making roles are concerned about economic outcomes such as profits, potential losses and return on investment, and because of that economic mindset, rely too heavily on social cues to judge creativity.

“If everybody else is doing something, we have this notion that it’s therefore good or better,” she explains. But such social cues are really “fool’s gold.”

To see if their theory held merit, Melwani and her co-researchers conducted two experiments: One involving students in a tightly controlled university lab, the other with experienced corporate managers and executives.

For the first study, the researchers recruited 154 undergraduate students and had them watch a video that presented a contrived business idea — making roofing materials from recycled baby diapers. Some students were told their decision would be the final word on whether the business idea would get funded through a campus entrepreneurship contest, prompting them to think of themselves as the primary decision makers. Other students were told their opinions would be combined with input from other students to make a decision, and thus felt less accountable.

After the students made their decisions, the researchers also administered an assessment to determine whether students were in an “economic mindset” – a tendency to prioritize concerns such as accuracy, rationality and self-interest. The experimental set-up allowed the researchers to manipulate both social cues and whether students would feel they were in a decision-making role.

Melwani and her colleagues found students assigned to primary decision-making roles were more likely to have an economic mindset. They also were more likely to discount the idea if it had failed to meet its Kickstarter goal, that is, had low social approval cues.

For this study, the researchers tapped 84 managers and executives at a multibillion-dollar corporation. Participants ranged from the CEO to those in technical and administrative positions and included people across several functional areas. They were asked about their work experience and how long they had been in their current roles. The researchers also asked them to describe the role they spent the most time in at the company, and coded those descriptions to assess economic mindset.

In this experiment, participants were asked to rate the creativity of a “password pill,” described as a tiny chip powered by the stomach acid and emits a specific signal that can be detected by phones and computers — turning your body into a password. They randomly assigned the employees to either a high social approval (94 percent funded on Kickstarter) or low social approval (22 percent funded) of the password pill.

The researchers found that the more time participants spent in decision-making roles, the more likely they had an economic mindset. And those who spent time in decision-making roles tended to discount the idea when it had low social approval – by about 1.5 points on a 7-point scale. Ratings for the idea with high social approval ratings weren’t affected.

The research suggests that people with an economic mindset tend to overweight the importance of social approval cues. And it suggests that people who have spent more time in decision making roles can get stuck in an economic mindset, even when they’re not making decisions. In other words, the people who are often the gatekeepers for new ideas might have a faulty perspective and be giving too much weight to social cues when evaluating creativity.

Melwani suspects that decision-makers are not aware of these biases. But it still might be possible for organizations to reverse or at least reduce this bias.

“One way to do that is to make people more comfortable with uncertainty,” Melwani says. A greater tolerance for risk and ambiguity might counteract the economic mindset that seems to take over. And if that happens, then presto! — more creative ideas are likely to be identified.