Maya (Anderson) Yates (MBA ’20) is the future of American capitalism: cuddly, not cut-throat. She is part of the next generation of business leaders who want to jettison the single bottom-line doctrine.

Yates and team at a STAR project meeting

She intends to marry profit and purpose with her own consulting practice one day, helping small businesses – the backbone of the U.S. economy – generate wealth and create jobs. “I want to find the diamond in the rough and realize its potential,” she says.

Raised in Decatur, Georgia, by a single mother – a social worker – she used to think that business was out to rip off the less wealthy. However, she harbored an entrepreneurial spirit and even created ventures as a kid. “I have always wanted to hustle,” she says.

Her upbringing made her all too aware of inequalities in America. At her public high school, “most of the Black kids lived in the housing projects and most of the white kids were from upper middle-class families.”

The experience instilled in her a determination to improve her lot. With a thirst for knowledge, she won a place at Harvard University, majoring in English.

Unfortunately, tight finances made the experience difficult, she says. “A lot of people had money, but I could not afford to go out and eat or go to spring break. They did not intentionally exclude me, but I felt like an outsider.”

Yates was not career-minded then. After she graduated, she worked at a restaurant in her hometown. Next door was a small real estate brokerage owned by her high school boyfriend’s father. She got a job there helping families to buy homes and generate wealth – something her family never did when she was growing up.

She enjoyed the dynamism – realtors essentially run their own business – but aspired to tackle bigger problems and impact on more people, inspired by leadership books from the likes of Ben Horowitz, a Silicon Valley investor.

She sought an MBA to work out her next move and for the skills to make the transition. She applied to several business schools in the southeast but was sold on UNC Kenan-Flagler’s culture of diversity and inclusion, recognizing that it enriches learning through group discussion and is good for the bottom line, too.

She attended a Diversity Day where prospective students from underrepresented groups – she is African American – come to Chapel Hill to meet with students, alumni and professors to get a feel for the community and admissions process.

“I fell in love with the beautiful campus and it was the community I was looking for,” says Yates. “It was collaborative: people genuinely wanted to help me achieve my aims.”

Indeed, the business school awarded her a merit-based scholarship covering the full tuition fee and a stipend to help her buy study materials. “I would have enrolled anyway because the MBA is a sound investment in yourself,” she says.

The money came from donors, whom she had the opportunity to thank personally at the annual Donors & Scholars Celebration, an event that brings benefactors together with the students who benefit from their philanthropy.

In conversation with them, she charted her journey from humble origins to the Business School, which gave her the confidence and analytical skills to work a summer internship at consulting firm McKinsey & Company.

Another benefit was the opportunity to get stuck into advocacy work. She joined the UNC Kenan-Flagler chapter of the Adam Smith Society, an association of business students who promote debate about how capitalism can help society, and served on its board.

And she joined the Admissions Advisory Board, which came up with plans to get more underrepresented minorities into UNC Kenan-Flagler. The recommendations included increasing minority presence in the School’s digital marketing content.

Her academic excellence was recognized by being named a Consortium Fellow, Forté Fellow, Bank of America Fellow, J. Taylor Rankin GIE Memorial Fellow and Dean’s Fellow. She served as chair of the Dean’s Fellows Program and the Consortium.

She also endorsed the creation of the new Black Business Student Association and connected with alumni near Chapel Hill who spoke at events, including one to celebrate African Heritage Month.

“We wanted to create a rallying point for Black students, a place where they can build their network,” says Yates.

The MBA certainly helped her cultivate a network of valuable professional contacts, sometimes through beers at Pantana Bob’s. The program included abundant experiential learning, too.

She worked as an analyst with NCGrowth on projects that support economic development in communities. For example, Yates helped a small town develop a plan to start an incubator to accelerate the growth of small businesses and generate jobs.

On another project, she helped a small business owner plan the future of his cooler that provides farmers the opportunity to drop off produce near their farms, rather than all the way to stores. “It saves them a lot of money. They have small profit margins and it’s difficult and expensive to be away from the farm.” 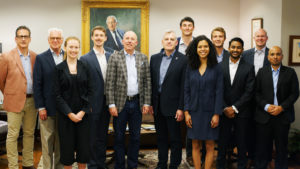 Yates and team with Domino’s executives during a STAR project

And she worked with Ritch Allison (BSBA ’89, MBA ’95), CEO of Domino’s, on a STAR consulting project. Her team helped in Domino’s search for a new technology hub location. They developed a model that would suggest ideal cities based on requirements Domino’s would input, like a budget.

The project gave Yates a real taste of consulting, experience of operating in a corporate environment and exposure to senior executives. “As an alum, he was a big fan of ours already, but he loved the model we built,” says Yates. 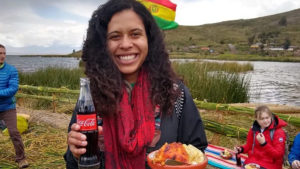 There were global learning opportunities too. Yates visited Bolivia and Ecuador on a Global Immersion Elective to see how business is done around the world and to develop cross-cultural communication skills. She got to know classmates and learned about sustainability in developing economies. She also enjoyed riding Gondolas in Bolivia, eating a live larva with a Quechua tribe in Ecuador, and tasting chocolate at Pacari, a leading brand in South America.

This experience and many more have given her a major confidence boost: She accepted a full-time job at McKinsey in Atlanta, where she starts work in August. She wants broad exposure to different industries and companies, and the chance to get involved in the diversity and inclusion initiatives at McKinsey, a social actor.

Yates hopes to eventually work for herself, helping to make small businesses a success and their dreams come true. “By working for Fortune 500 firms, I get to see how it’s done in the largest and most complicated companies. I want to bring those lessons to smaller businesses. The entrepreneurial spirit still lives in me.”