Dedicating himself to “good trouble” 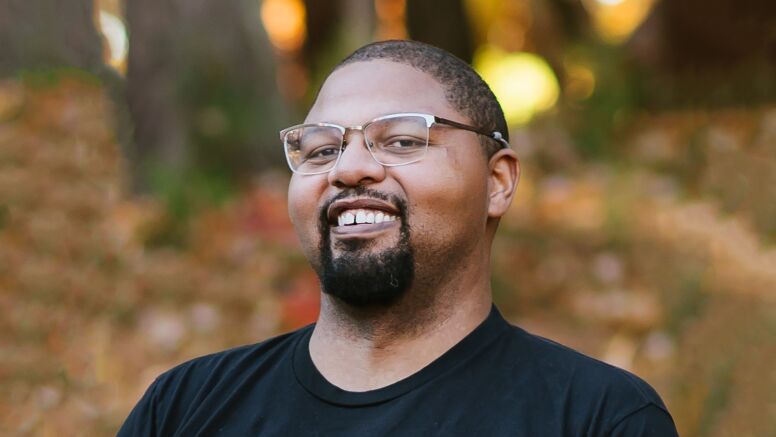 Napoleon Wallace (MBA ’10) is an impact investor and an embodiment of the indomitable human spirit.

He has been using his skillset to create transformative change for nearly 20 years. In fact, when asked about his hobbies, he has trouble recalling any.

“In my spare time, I like to start new ventures,” Wallace says with a contagious laugh.

He is a managing partner and chief investment officer of Southern Reconstruction Fund and FundONE, and co-founder of both Partners in Equity and Activest.

Previously, he served as the North Carolina Deputy Secretary of Commerce, leading the state’s community investment, workforce development and economic development infrastructure, and as the social investment officer at the Kresge Foundation in Detroit, where he guided impact investments related to health and human services. 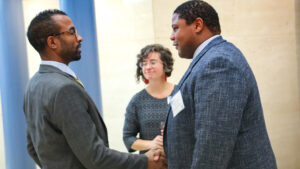 While Wallace is unwavering in his commitment to reimagine markets and reinvigorate disinvested communities, he also is confronting his own heartbreak. In 2019, at age 38, Wallace learned that he has amyotrophic lateral sclerosis (ALS), a progressive neurodegenerative disease that affects nerve cells in the brain and the spinal cord.

That diagnosis would slow down most people, but it motivates Wallace to speed up his efforts.

“Without question, it’s a knee-buckling diagnosis,” says Wallace. “Once I brushed myself off and got over the shock of it, I saw it as an opportunity to reassess my talents and reallocate my time to make sure I was being intentional about the moments I have and the legacy I’ll leave behind.”

The power of impact

Sheer determination, his faith in people and a desire to have a positive impact drive Wallace forward in his professional pursuits. The years before his diagnosis tell a similar story of someone unafraid of hard work, willing to take calculated risks and never limited by circumstance.

Before finding his calling in finance, Wallace managed a bookstore, sold shoes, repaired cameras, painted houses, cooked, gambled, bartended and waited tables. The son of a teacher and a small business owner, curiosity and entrepreneurship were in his DNA.

As a rising junior at NC Central University, Wallace spent his summer working as a janitor cleaning the offices of a stockbroker in Greenville, North Carolina, near his hometown of Grimesland. It was there that he read his first prospectus, got an insider’s view of the investment management business, and found the inspiration to swap his double major in biology and mathematics for a BBA in finance.

He counts the part-time teller gig that he started the following fall at State Employees’ Credit Union, where his mother banked, as his first “industry job.” Two years later, he was learning commercial credit as a commercial underwriting analyst at M&F Bancorp, and subsequently, putting his knowledge of credit to work in public markets at Wells Fargo Securities in Charlotte, eventually becoming an institutional investor-ranked sell-side bond analyst.

But it wasn’t enough. Wallace wanted his work to have more meaning. In seeking professional fulfillment, he discovered UNC Kenan-Flagler.

“When I realized that my work was not having the impact I wanted, I went looking for a way to align my knowledge of finance and my passion for impact,” says Wallace. “At the time, there weren’t a lot of schools that had a dedicated presence in social enterprise. I looked around and realized that Carolina was one of the best programs in the nation on social entrepreneurship and sustainable finance.”

The wisdom of hindsight

Wallace learned many skills and made many friends as a student in the full-time MBA program at UNC Kenan-Flagler, where he was a Premier Fellow, a Kenan Institute Leadership Fellow, a Net Impact director and a Carolina Entrepreneurship Fellow. He earned concentrations in both sustainable enterprise and entrepreneurship.

However, many of his best experiences with UNC Kenan-Flagler have come in the years after graduation. Engaging with the School as an alumnus allowed him to make professional connections and remain optimistic about the future. He deepens his engagement by speaking with students, judging events like the School’s Invest for Impact competition and working with the Center for Sustainable Enterprise (CSE), which awarded him the 2016 Distinguished Alumni in Sustainability Award, which honors leaders who bring the triple-bottom-line of people, planet and profit to bear on their work. 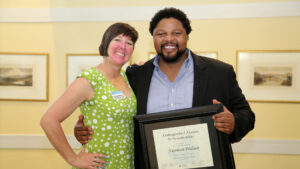 “I actually put Napoleon ‘on the spot’ with a news crew the day he was checking out UNC Kenan-Flagler,” she says. “He delivered his thoughts after a keynote talk with a clarity and confidence that showed me he had tremendous leadership potential. From that point forward, Napoleon has been put ‘on the spot ‘many times, and he always responds to the call with openness and ease. He’s one of those students I tagged for great things, and he has exceeded my expectations.”

He says he has been especially reflective whenever he visits campus.

“In every room, there is an MBA that reminds me of my younger self and I know that she or he has a similar commitment to have a positive impact on the world,” he says.

Partners in Equity is a $50 million real estate private equity fund that helps diverse-owned businesses purchase owner-occupied commercial real estate. Activest is a fiscal justice investment research firm whose bondholder engagement campaign to incorporate the cost of lawsuits, settlements and inequality into the pricing of municipal bonds was recently featured in The New York Times. His most recent venture, the SRF Ownership and New Equity Fund (FundONE), received early catalytic support from Kenan family members. He and co-founder Dr. Dorian Burton aim to fulfill the promise of Reconstruction by inspiring new models of ownership and restorative capital across the American South.

His involvement in these businesses is his passion, and you can trace its roots back to UNC Kenan-Flagler.

“With the hindsight of 20-plus years in the impact investing and community economic development sector, it’s clear that my time at UNC changed my worldview and the trajectory of my career, giving me connections, insights and opportunities that helped me to craft a personally gratifying and professionally impactful career. I can credibly say that I’ve found my niche and left a small but distinct fingerprint on this evolving sector. For that, UNC will always have a special place in my heart.” 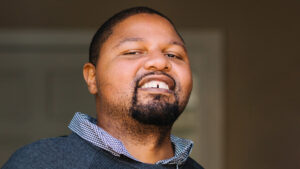 Moments of reflection are not uncommon for Wallace. There’s no doubt that his medical diagnosis has profoundly changed his perspective. But he has not allowed it to change the core of who he is. He cracks jokes. He works hard to speak and be understood as an advocate. In a video in which he revealed his diagnosis, he danced in the kitchen with his wife.

“In the two years since my diagnosis, a lot has changed. I’ve been known for a booming voice, gregarious demeanor and a verbose style. It’s been a transition to go from being a vocal CEO to more of a quiet leader, but it has its benefits. I talk a lot less and listen more. It’s different although my wife doesn’t seem to mind the change,” he laughs.

“I’m still an executive, but I’m leading in a different way. It’s leading with empathy and collaboration instead of taking a competitive approach to advance my priorities. Interestingly, it has led to a clarity of purpose and commitment from allies that has accelerated the speed, scale and scope of my work. I may show up differently now, but it’s still my connections to people and purpose that makes life personally, professionally and emotionally fulfilling.”