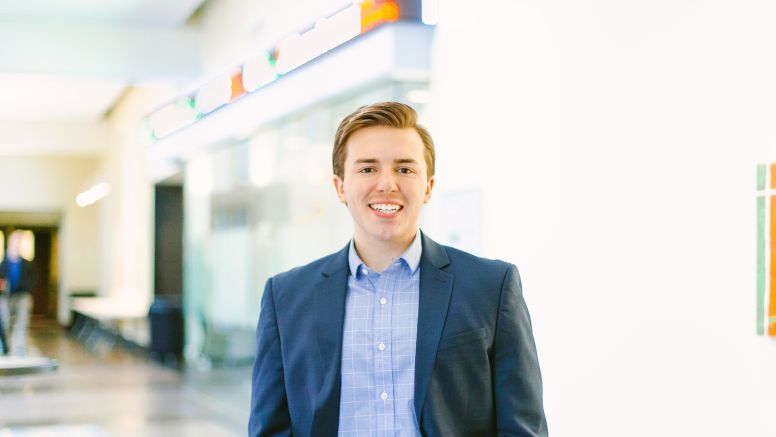 A first-generation college student, TJ Tucker (BSBA ’20) felt like he was one of few people at Carolina who did not come from a legacy family.

His classmates seemed to have a frame of reference – based on their parents’ college experiences – to know which paths they wanted to take at UNC.

“I had no idea what I wanted to do,” says Tucker. “Being first-generation, I have to work two times as hard to get on pace with some of the other kids.”

And as it turns out, Tucker is an example of what is possible. Tucker never took any piece of his education for granted. He excelled in the classroom (making the Dean’s List every semester), took on a variety of leadership roles and gave back to the Business School and the wider community. He exceeded expectations. 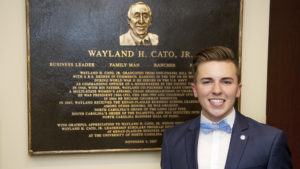 “I had the incredible honor of going to TJ’s high school academic awards ceremony since I was presenting him with the Wayland H. Cato Jr. Merit Scholars Endowed Scholarship for the Assured Admission Program” says Jackie Fritsch, assistant director, admissions and scholarships for the Undergraduate Business Program. “I quickly realized how special this young man is. It wasn’t because he won every conceivable award they gave out that day, but what faculty and staff said to me privately. ‘He will change you and your school forever.’ ‘Please take good care of him – he is a true gift.’ Four years later, I couldn’t agree more. I don’t know if we will ever know another TJ.”

He grew up in Monroe, North Carolina, a small city outside of Charlotte. When he started looking at colleges, he was keen on big universities. “College to me was what you see in the movies,” he says. The University offered the substantial size he craved, and UNC Kenan-Flagler offered the cozier feel he needed.

“I fell in love with the energy here at Carolina. I remember going to The Pit and seeing the Bikeathon and all these clubs and hundreds of people talking,” he says. “UNC Kenan-Flagler was a little world on the edge of campus. It gave me comfort and the family vibe.”

That camaraderie is genuine as Tucker quickly learned. People are happy for their classmates’ wins. For example, when Tucker received his Wells Fargo internship offer, his friend gave him a tie as a gift.

Of course, the college experience is highlighted by enriching educational opportunities. Seeing the world draws Tucker’s attention. Before attending UNC Kenan-Flagler, he had never been overseas. For his first trip in 2017, he went to Beijing, Shanghai and Xi’an in China in a Global Immersion Elective.

As part of the GIE, he analyzed the differences between American and Chinese business models at Tencent, Hyundai and Lenovo, collaborated with East China Normal University students on a two-month study which analyzed cultural differences among millennials.

He traveled to Spain for a case competition and again to study for a semester at IE University in Madrid. This experience, he says, forced him out of his comfort zone. He knew no one and eventually made new friends. By going through this, he feels he has grown as a person and will be just fine as he moves on post-graduation. 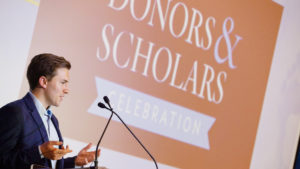 “In the United States, we see life and think, ‘Your way is the only way,’” says Tucker. “Then you go around the world and realize there are many ways to achieve your objective. There’s so much to learn in the world. You have to be open to it.”

Tucker had a rich on-campus experience, too. As vice president of the UNC Portfolio Management Team, he built a comprehensive Excel model to analyze the current $60,000 portfolio in real time. He also was a sector analyst for the media and telecommunications group for the team.  As part of Alpha Kappa Psi, Tucker was the fundraising chair and pledge class vice president of finance.

He volunteered his time, too. One of his most rewarding endeavors was helping children ages 7 to 12 with homework, social skills and personal development through Helping Youth by Providing Enrichment (HYPE). By maximizing his enthusiasm, Tucker is a great fit for the Undergraduate Business Ambassadors program. He hosted Admitted Students Days, resume workshops, mock interviews and company information sessions. He also provided informational tours for incoming students, alumni, donors and firm representatives.

Tucker also garnered extraordinary work experience. He founded and operated a business as DJ TJ for three years and DJ’d more than 100 weddings, birthday parties and corporate events. He had summer internships in Charlotte: as an accounting intern at Rodgers Builders, Inc. and an investment banking intern at Wells Fargo Securities.

During the summer of 2019, Tucker worked at J.P. Morgan as a summer analyst in the healthcare coverage group. He has accepted a full-time role as a banking analyst in healthcare in New York City.

His dedication has not gone unnoticed at UNC Kenan-Flagler. Tucker received the Hampton Shuping Prize for Excellence, a core values award, and the award for academic excellence in finance in 2020.

As Tucker gears up for his full-time job with J.P. Morgan, he is reflecting on his many Carolina memories. With the COVID-19 crisis, he finished the semester taking online classes and hunkered down in his off-campus housing with his roommates. No longer able to check out restaurants and bars or look for the best coffee shops, they tried to recreate those kinds of experiences at home, including in-house wine and cheese nights.

Big plans are on the horizon, he says when pondering what his life will be like down the road. Perhaps, he’ll be the campaign manager for the first woman president or a judge on “Shark Tank,” as he daydreams out loud.

“I feel I will stay in finance in banking or private equity,” adds Tucker. “I’m a culture changer and culture creator. Who knows? Maybe I’ll be chasing Jamie Dimon’s seat.”

Read more about Tucker: Poets & Quants profiled him as one of the “Best & Brightest Business Majors of 2020.”