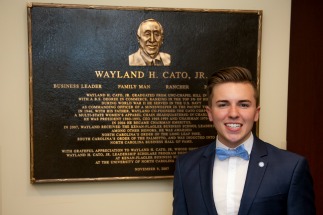 Tucker is a student in UNC Kenan-Flagler Business School’s Assured Admission Program, in which the School – in partnership with the UNC Undergraduate Admissions Office – selects an exemplary group of first-year students for assured admission to the Undergraduate Business Program.

The scholarship was established by Wayland H. Cato Jr. (BSCOM ’44), who graduated from UNC in 1944 with a BS in commerce, ranking in the top 3 percent of his class. During World War II, he served in the U.S. Navy as commanding officer of a minesweeper in the Pacific Theater. Along with his father, he founded the Cato Corporation – a multi-state women’s apparel chain headquartered in Charlotte, North Carolina – in 1946. He was president of the company from 1960-1993, CEO from 1968-1999 and chairman from 1970-2003. In 2004 he became chairman emeritus. Among other honors, Cato received the Kenan-Flagler Business School Leadership Award in 2007, and was inducted into the North Carolina Business Hall of Fame.

“Being named a Cato Scholar has been a life-changing opportunity that I will never forget,” says Tucker. “All throughout high school, I was divided because I always put an extremely large amount of time towards school work but also had to work multiple jobs to support myself and my endeavors. The Cato Scholarship has given me the opportunity to focus solely on my education and become more involved in and dedicated to the UNC community than I ever could have imagined.”

Tucker served fundraising chair for UNC’s chapter of Alpha Kappa Psi, the oldest and largest business fraternity in the U.S. He is also a member of Helping Youth by Providing Enrichment (HYPE), an organization that tutors and mentors K-5 students at underserved community centers in the Chapel Hill-Carrboro area. His ultimate goal is to pursue a career in investment banking.

“I want the Cato family to know how much I appreciate their generosity and how they have inspired me to be a more generous and gracious person,” says Tucker. “With hard work and dedication, I aspire to be in their position one day so I can give back in the exact same way.”

The Cato Scholarship is awarded to students based on academic merit and promise. It was created for in-state first-year or sophomore undergraduates who intend to enroll at the Business School and have been admitted via the Assured Admission Program. The scholarship can also be awarded to juniors and seniors who are currently enrolled in the Business School.

The scholarship covers the cost of tuition, fees, room and board, books and course-related supplies, and academic enrichment activities.

“At UNC Kenan-Flagler, we are committed to helping high-quality students excel. Mr. Cato’s endowment continues to serve as a vital source of support as we work to achieve this important goal,” says Doug Shackelford (BSBA ’80), dean and Meade H. Willis Distinguished Professor of Taxation.