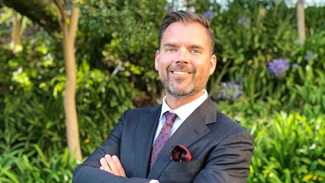 The modern American healthcare system is complex and requires leaders who can deftly balance the needs of patients with the demands of business. They must manage and oversee teams of doctors, nurses and administrators while recognizing the restraints of finances.

“There must be a physician at the boardroom table who also understands business,” says Adam Brown (MBA ’13), a physician and business leader.

It takes a person with specialized skills to pull off such an overwhelming task. In fact, Brown, a doctor specializing in emergency medicine, realized his own limitations when it came to understanding policies, such as the Affordable Care Act and its financial implications.

Armed with a desire to improve more patient’s lives, Brown set out to find a rigorous, prestigious MBA program that would allow him to continue his career as a doctor while developing a new skillset in management and business.

“Physicians are strong leaders,” says Brown. “They can be leaders of the business of healthcare by strengthening their role and visibility while also being protective of patients and providers and nurses.”

In seeking a program that could help him lead with heart, he found UNC Kenan-Flagler’s online MBA@UNC program. Having grown up in North Carolina, Brown was well aware of the culture of the School and its leadership in teaching and scholarship.

“Physicians seeking an MBA need a challenging program with demonstrable success that allows them to catapult their careers by having a bigger impact on patient care,” he says.

MBA@UNC more than fit the bill for him, he says.

“The personality of our program and of our school starts at the top and with the culture of UNC,” said Brown in his MBA@UNC graduation speech. “It starts with someone realizing that people are more important than profits. In the end, what we determine to do with this knowledge is of the greatest importance.”

Healthcare students, particularly those who are physicians, bring a different perspective to business programs.

“I brought a little bit of wisdom to my colleagues because I had gone through a graduate program already,” Brown says. “At the end of the day, whether you make a high pass or pass grade will probably not change the direction of your life. But understanding the material will.”

He kept calm despite the challenge of maintaining a high-pressure, full-time job while completing an MBA program. His approach to study was shaped by his experiences at work and helped his classmates, too.

“I had a different personality than many of my classmates because of my medical background,” says Brown. “My brain has been trained to work differently. I have realized there aren’t many real emergencies in life until you deal with true patient emergencies. That changes your perspective when dealing with the stresses of the program.”

Before signing up for business school, Brown was an associate medical director of an emergency department in Illinois. During the program, he moved from Chicago to Washington, D.C. and was promoted twice.

He first moved to D.C. to serve as the medical director of a distressed hospital in southeast Washington, D.C. There, he immediately applied what he was learning about operations and leadership in the MBA@UNC program.

Next he was promoted to regional medical director for D.C. and Virginia where he faced challenges managing multiple emergency systems in hospitals. This required him to employ a number of the lessons he learned in business school.

Today, Brown is the senior vice president at Envision Healthcare for the Mid-Atlantic region. Among some of the skills he regularly uses is his understanding financial statements, negotiating contracts and accounting.

“The MBA catapulted me to a vice president position quickly,” says Brown. “I’m one of the youngest vice presidents in the organization. The MBA really set me apart.”

What makes Brown unique is his dual role. He maintains one to two clinical shifts per week, so he still sees patients.

These experiences are never far from his thoughts when he’s making decisions about the trajectory of the hospital or commenting on relevant policy. He makes a point to advocate for patients.

“My tagline is, “Today I’m wearing a suit, but yesterday I was wearing scrubs,’” he says.

Ultimately, what drove Brown to business school was a hope he could help more people.

“In a single shift in the ER, I would see 25 to 35 patients, and I had an impact on their lives,” he says. “In managing patient care in the Mid-Atlantic region for hospitals and hospital systems, I have an impact on half a million patients per year.”

Policy related to healthcare is of great interest to Brown. He categorizes his work two ways: inward facing and outward facing. Within the system, he sees the effects of the ACA and its dismantling or potential dismantling. For example, he noticed how more than 20 percent of people were without insurance in Virginia because it opted not to expand Medicaid. 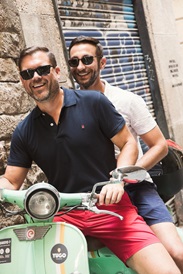 On the outward facing front, Brown has encouraged strong opioid policies, including reducing prescriptions and promoting initiatives to lower the wait times for getting help.  Brown’s husband, Dr. Steven Farmer, is a cardiologist and health policy professor. Together they published an article about value-based care and a pay-for-performance model.

They love to travel and regularly vacation. Most recently, they visited Spain. Their Great Dane Cate is “our fur baby,” says Brown, “and we love her, all 130 pounds of her.” Brown’s hobbies include daily exercise, photography and playing the piano. A foodie, he also enjoys cooking for friends. He’s most famous for his paella and gazpacho recipes.

How does someone with such a demanding career could ever find the time to be so well-rounded? “Perfection is the greatest enemy of good,” he says.

His advice does not end there. He wants other physicians and those thinking of pursuing an MBA to carefully consider their options.

“Not all MBAs are created equal,” says Brown. “Going to a school where I was pushed, supported and had a number of colleagues with similar desires was important to my success post-MBA.”