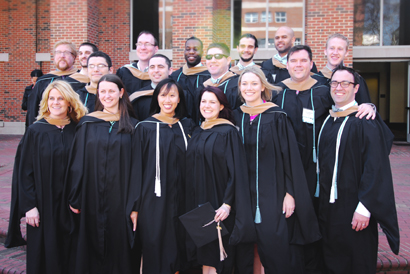 The morning sky was Carolina blue, the Bell Tower chimed and the redbuds blossomed.

“It’s a great day to be a Tar Heel and a great day to join the ranks of UNC Kenan-Flagler alumni,” said Dean Doug Shackelford at the third MBA@UNC graduation ceremony and Beta Gamma Sigma induction on April 5.

More than 50 students of the 60 graduates from two cohorts attended – along with over 300 friends and family joining them from as far away as California, Massachusetts and India.

Shackelford, who served as the first associate dean of MBA@UNC, is always asked about the program during his travels as the new dean of UNC Kenan-Flagler.

“Universally the response is great pride that our business school is on the vanguard in using technology to transform business education,” he said.

“During the program, many, many of you have had promotions or moved into jobs that make you happier – and you haven’t missed a beat,” said Susan Cates (MBA ’98), executive director of MBA@UNC and UNC Executive Development president.

They also celebrated births and mourned deaths during the program, including that of classmate Maj. Steven Brothers. 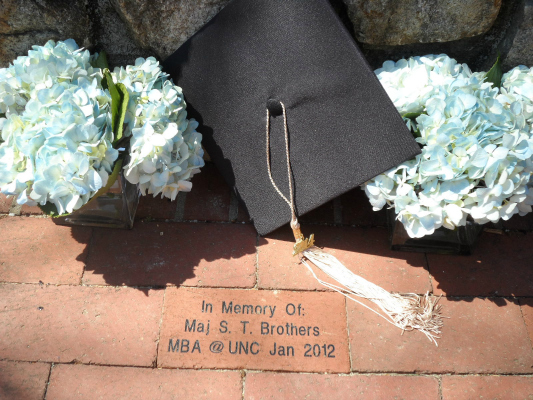 The graduates dedicated their class gift to fund a scholarship in memory of Brothers, who died from complications from acute leukemia early in the program. His wife, Maggie, joined the ceremony where it was announced that the graduates already have pledged over $88,400 toward their $100,000 endowment goal.

Adam Brown, medical director and chairman of the Department of Emergency Medicine at the United Medical Center in Washington, D.C., spoke on behalf of his fellow graduates and announced the class gift.

An emergency physician, Brown decided an MBA education could help him improve the most lives in the shortest amount of time, he said. “If I can implement positive change in the whole system or improve the healthcare delivered at a hospital or in an entire emergency department, my impact on patients’ lives has grown exponentially.”

Brown didn’t expect to become close with classmates. “I can say without equivocation, we have made lifelong friends and collaborators—something many of us thought would be difficult, if not impossible, in an ‘online program.’”

“I believe that the personality of our program and of our school starts at the top and with the culture of UNC.  It starts with someone realizing that people are more important than profits,” said Brown. And “in the end, what we determine to do with this knowledge and how we use our knowledge is of the greatest importance.”

Keynote speaker Tom Gawronski (BSBA ’80), a member of the Board of Visitors at UNC Kenan-Flagler, discussed the power of optimism, “the crux of leadership,” and its infectious nature. “Just know that every tomorrow has the potential to be better than the reality of today,” he said.

Atul Nerkar, professor of strategy and entrepreneurship and associate dean of Executive MBA Programs, received the faculty award for his corporate strategy course.

Other highlights about the graduates include:

“All of you are Tar Heels now,” said Cates, “and we hope that Carolina will always feel like home for you wherever you are in the world.”