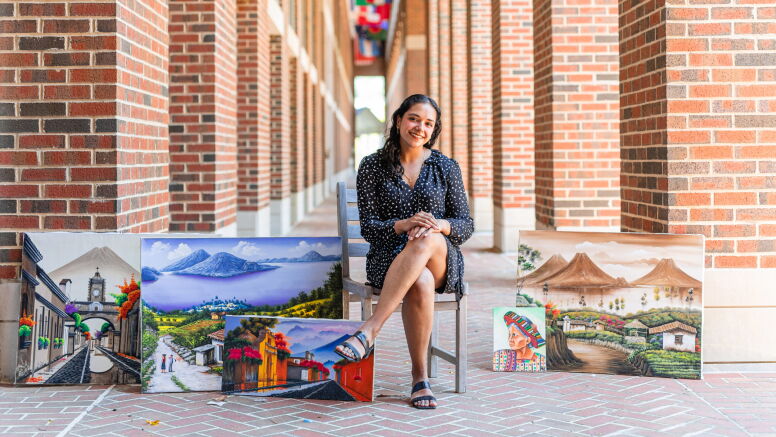 There are three things you know about Anna Manocha (BSBA ’22) after talking to her for five minutes.

She’s wickedly funny, she never hesitates to tell it like it is and when she believes in something, she gives it everything she has.

You want Manocha in your corner. During her time at UNC Kenan-Flagler Business School, she was a program lead for the Allison Mentorship Program, helping first-year UNC students from underserved populations prepare for the Undergraduate Business Program through professional development mentoring, including reviewing applications and resumes, practicing interviewing and connecting them early to opportunities on campus. 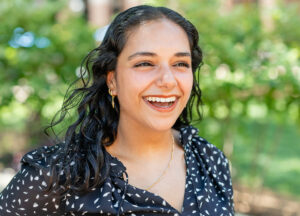 She studied abroad in Cape Town, South Africa, and Sevilla, Spain. She spent spring break of her senior year in Puerto Rico studying approaches to diversity, equity and inclusion. Through research internships, Manocha explored the link between failed government programs and homelessness rates while building houses in Guatemala and staying at a homeless shelter in Washington, D.C.

Manocha focused on gender equality and women’s education issues as president of the group She’s the First and consulted for organizations ranging from Innovate Carolina to the Chatham County Food Club.

Manocha’s work mattered. She was a Kenan Scholar and received the Eve Carson Scholarship. She also won two Chancellor’s Awards: The Class of 1983 International Leadership Award and the UNC Shuford Program in Entrepreneurship Studies Award.

But when you talk to her, she won’t mention all of these things first — if at all. Instead, she will probably share the story of Carolina Lopez (BSBA ’23). Manocha met Lopez every Wednesday for months to review Lopez’s resume and conduct mock interviews over lunch to help her transfer to UNC Kenan-Flagler. Lopez was admitted on her first try.

“I never saw it as an option to do the bare minimum and then go home. That has never occurred to me,” says Manocha. “UNC Kenan-Flagler has taught me so much about making change happen. I’ve been able to do the things I feel most passionate about. There just happens to be a lot of things.” 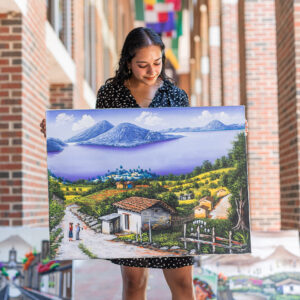 She’s perhaps most passionate about Arte con Impacto (Art with Impact), the business she founded in 2021 to support artists and their families in Guatemala.

She first traveled to Guatemala in March 2020, leaving just three hours before COVID-19 travel restrictions began. Manocha was there with UNC’s chapter of From Houses to Homes whose members travel yearly to the country to build houses and create clear paths to overcoming the cycle of poverty. Free healthcare is offered at the nonprofit’s clinic and children are educated at its school. It’s a comprehensive, long-term approach to helping families, exactly the type of work that appeals to Manocha.

“Even when you build someone a home, they still may not have a job or have access to medical care and education,” says Manocha. “This is not one of those things where you build a house, get your Instagram photo and leave.”

After working on the home from 9-5, Manocha frequently checked out the art market in Antigua. The town attracts many tourists with its vibrantly colored historic buildings and charming cobblestone streets, but many residents live below the poverty line. The World Bank estimates that Guatemala’s poverty rate hovers around 47%. For the country’s indigenous population, the poverty rate soars to almost 80%, according to the United Nations.

At the market, Manocha saw numerous vendors offering original works of art depicting the town. Then she looked deeper.

“What ends up happening is that the artist gets a very small percentage of the sale,” says Manocha. “That fact was always in the back of my mind.”

She launched her business with the $5,000 she received through the Eve Carson Scholarship. In 2021, she returned to Guatemala, bought as much of the artwork as she could and started Arte con Impacto as a way for people to buy art directly from the artists so they receive the profits they deserve. Many works are still available on the nonprofit’s website, which features biographies and photos of the artists. The venture also donates profits to From Houses to Homes.

“I always wanted to do something different, but I wasn’t sure what,” says Manocha. “I truly believe in the work it’s doing. I hear about businesspeople closing $800 million deals and I think back to this type of work. I made a sale of $64 a couple of days ago. I consider that meaningful.”

The connections she made at UNC Kenan-Flagler helped make the business a reality. When she was trying to figure out the plan for Arte con Impacto’s business, she reached out to McCauley Palmer (BSBA ’22) who she met during her first year as a fellow assured admit to UNC Kenan-Flagler.

“McCauley is one of those friends where you can say these are my goals and ambitions and dreams and then they hit you up on a Friday night and ask, ‘What are you doing? What about those goals and ambitions and dreams you said you have? You doing anything right now?’” says Manocha. “I met a lot of those types of people at UNC Kenan-Flagler. People here hold you accountable and then also really help lift you up.

“That’s one of the best parts of being here and one of the big reasons I feel so prepared for what’s next.”