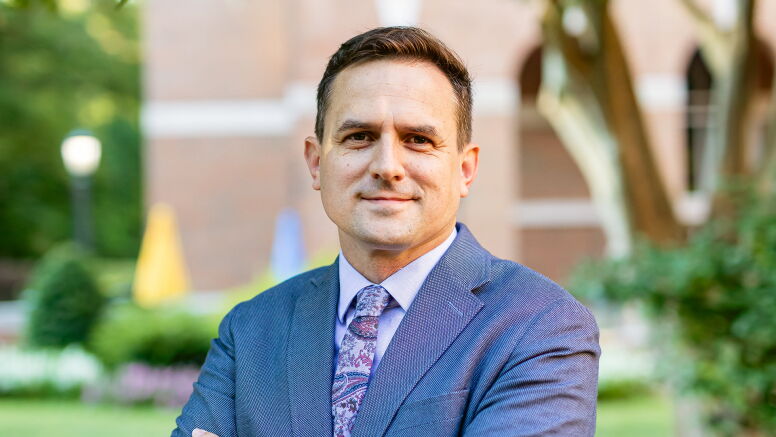 “It’s an introduction to business class,” Hendricks says. “We’ve designed it to showcase a broad perspective of business, so we introduce students to each of the School’s academic areas, emphasizing teamwork and utilizing historical and philosophical writings to encourage students to ponder the role of business in today’s society.”

The course also presents undergrads with a unique experiential learning opportunity to apply theory to practice. Students manage “companies” while competing against their classmates in a simulation.

“The simulation places our students in specific department roles that are interdependent,” says Hendricks. “They work collaboratively to best position their start-up company for success against other student teams – deciding how much to raise in debt and how much in equity, which customers to target, how much to spend on marketing. They make these decisions while being mindful of key performance indicators – effectively learning about business by doing.”

Hendricks likes to see their competitive natures show: “This generation is so adept at self-learning, experiential learning, that putting them in a gaming scenario that mimics the workplace is a fun, intuitive and risk-free way for them to learn how to make smart business decisions.” 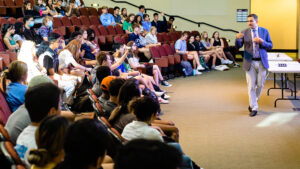 “Brad’s vision for the course will single-handedly change UNC Kenan-Flagler students’ ability to holistically think about the tradeoffs in the business world, a skill that is especially important for future business leaders,” says Shimul Melwani, associate dean of the Undergraduate Business Program. “He models this in the best way possible. Not only is his class rigorous and student-centered, but he also holds students to high standards while operating with compassion and authenticity.”

Let’s get it started

The accounting professor is a firm believer in hands-on experience. During his college days, Hendricks got a taste of the startup life and literally accounted for every dollar when he worked for a small tech company.

“It was deep in the red when I got there. I had to tell the CEO at the end of each month how much money was needed to pay employees and keep the lights on, and he’d draw that amount from his personal account to keep the business going,” he says. “He bootstrapped the whole venture. By the time I left, the company had become profitable, was reinvesting every dollar back into the business, and later acquired by a leading firm in the field of data recovery.”

The experience sowed the seeds for his interest in how early-stage firms access to capital which blossomed into his eventual expertise in IPOs and financial disclosure.

Hendricks has been recognized for his unique research on founders and fundraising for nascent firms. His papers examine topics such as IPO roadshows, the pros and cons of founder leadership, unicorns (private companies valued at $1 billion or more) and special purpose acquisition companies (SPACs).

In his research examining SPAC disclosure accuracy, he reveals that only 35% of firms meet or beat the financial projections they include in the registration statements they provide to investors and the proportion declines for forecasts that are on longer horizons. When comparing SPAC projected revenue growth with firms completing a traditional IPO, he finds the SPAC projections are approximately three times larger on average than the actual revenue growth of the IPO firms.

The Securities and Exchange Commission (SEC) referenced his findings in their recent proposal to enhance disclosure and investor protection relating to SPACs, shell companies and projections.

The hard is what makes it great.

Hendricks’ research has appeared in top academic journals, Harvard Business Review and The Wall Street Journal, to name a few.

He won the Business School’s 2021-22 Bullard Faculty Research Impact Award, which recognizes a professor each year whose research has had a significant effect on the practice of business. He is the first assistant professor to win it. Additionally, Hendricks received the Glenn McLaughlin Prize for Research in Accounting and Ethics and the Morgan Stanley Prize for Best Paper in 2021.

Hendricks is a “huge asset to the School,” says Jana Raedy, associate professor and EY Scholar in accounting and senior associate dean of business and operations.

“Brad is a top-tier researcher and an amazing teacher,” she says. “He has not only made a major impact on the academic community with his research, but also has had a significant impact on the business community more broadly. He teaches extremely difficult material in a way that, while challenging the students to think critically, is accessible to them. Even as he’s at the top of his field, he remains humble and is just an all-around nice guy. He’s a great mentor to the students and a superb colleague.”

UNC Kenan-Flagler students recognized his work in the classroom: He won the prestigious Weatherspoon Teaching Excellence Award in the Master of Accounting (MAC) Program in 2016, just two years after joining the faculty as a newly minted professor after earning his PhD at the University of Michigan academic year, and won it again in 2022. 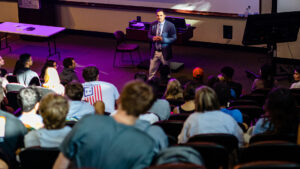 “When you hear your name called it’s thrilling,” says Hendricks. “Teaching really matters here at UNC Kenan-Flagler. There’s a high value placed on it, and I do the best I can. I am glad that students find such value in my class, despite its reputation for also being the most difficult class in the MAC Program.”

His philosophy: “We are trying to stretch students, but don’t want to tear them. I want students to look back at a grade in my class and know they earned it. I often tell students, ‘The hard is what makes it great’ a quote from the movie ‘A League of Their Own.’ I hope my class is a little bit hard, it means they’re getting something out of it.”

Hendricks appreciates how hard his students work and has been especially inspired by those with challenging personal situations.

“What I’m continually surprised by is their resilience,” he says. “Students divulge information and you can’t believe they’re able to persevere with what they’ve got on their plate. It’s remarkable to see what students overcome. It goes unnoticed by their peers, but they share challenges and issues with their professor. They have tremendous strength and perseverance.”

Since coming to UNC Kenan-Flagler in 2014, he has found two other major surprises about his students: “How crazy they are about basketball and Halloween – it’s bigger than any other holiday,” he says.

Beyond the Business School

Outside the classroom, Hendricks helps UNC Kenan-Flagler students with honor theses for the Kenan Scholars program, and served on the board of Carolina for the Kids, the largest student-run philanthropy in North Carolina.

A big family growing up helped him develop both a fondness for numbers and a competitive streak since he had to keep up with four siblings, including three older brothers. “We tried to quantify everything: whiffle ball stats, badminton smashes, Nintendo winning percentages. We even created a low-tech version of fantasy football, choosing our favorite athletes and using the daily newspaper to manually track their year-to-date stats and scoring.”

Hendricks attributes part of his perseverance in school the result of having worked on a bacon factory line for several summers. “That was hard work. Whenever I would get discouraged with school, I would reflect back to my time on the factory line and quickly realize that school was a pretty good option.” He credits education with changing his life for the better, and he wants to help his students achieve the same outcome.

“My college experience was transformative,” he says. “It’s a complete joy to be involved in the process, to see it’s not just me whose life has changed. I hope this is not lost on people – there is so much good that comes out of the university experience. It changes lives for the better!”