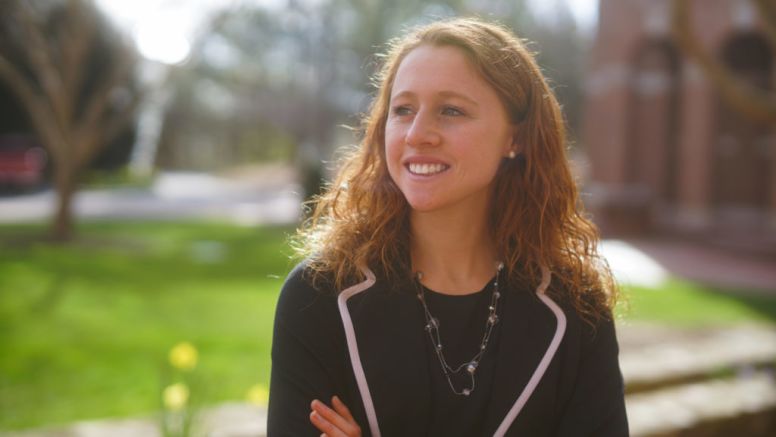 Marissa Devine (BSBA ’19) wants nothing more than to make a difference in the world. Her heart swells for programs that help children and their families facing enormous challenges. The experience is personal: When she was a kid, her 9-year-old cousin was diagnosed with brain cancer, and she saw the devastation experienced by the family.

When Devine arrived on the UNC campus as a first-year student, she searched for a way to contribute and make her mark. She found it in Carolina For The Kids (CFTK), which provides major emotional, medical and financial support for the patients and families served by UNC Children’s.

“The mission of Carolina For The Kids aligned perfectly with what I wanted to do,” says Devine.

The organization raises money to help families afford gas cards, food and other bills while caring for their children. It also provides free meals to the families on Tuesday night at N.C. Children’s Hospital so parents don’t have to leave their children’s bedside to eat. The focus is to relieve some of the stressors experienced by families with a child in the hospital.

Devine signed up for the CFTK community relations committee, which spreads awareness in the community through encouraging middle schools and high schools to host their own mini marathons, create CFTK clubs and organize fundraisers to support UNC Children’s. In her sophomore year, Devine wanted to make more of a commitment, so she applied for a subchair position and became the middle schools subchair. Even though, she spent her spring semester junior year abroad, Devine held a subchair position on the publicity committee and maintained her active role and passion for CFTK.

In her final year at Carolina, however, she was determined to have a greater impact. She serves on the executive board – one of 16 students – and as the PR chair. In this role, she is flexing her business muscles. She has led a group of 25 students, improved her communication skills and reached out to media and other sectors of the community to promote CFTK and its work. 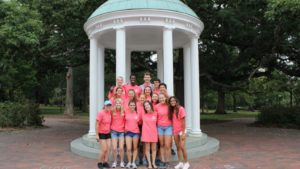 Marissa Devine with the Carolina For The Kids executive board.

In finding her place with CFTK, Devine also connected more deeply with the UNC Kenan-Flagler community. For starters, she talked about her experience with CFTK during her marketing class taught by Claudia Kubowicz Malhotra, who suggested Devine ask Dean Doug Shackelford (BSBA ’80) to send a message about an upcoming CFTK event. He agreed and met with Devine to learn more about her work.

His school-wide email raised awareness about CFTK in the UNC Kenan-Flagler family. Brad Hendricks, assistant professor of accounting, sits on the CFTK board of directors. He and his colleagues act as a sounding board for the students. They help them make decisions, get in contact with those inside and outside the University who can help the cause, and occasionally push back on some ideas, says Hendricks.

Hendricks came to CFTK as a result of his firsthand experience with the doctors in the organization. Hendricks’ daughter, who is now 12, has a complex medical history. While he has lost count, Hendricks estimates that he and his family have spent a total of 500 nights living out of four different hospitals across the U.S.

“I bring the patient side to the board,” he says. “I try to narrow their focus. The organization’s mission is so broad, but organizations really excel when they clearly define a specific issue that needs to be improved.”

In fact, his daughter’s doctor invited him to join the board because it lacked a member with business expertise. But Hendricks doesn’t want this organization to be fixated on fundraising. While that is important, the students improve lives of patients and their families without spending a dollar, he says.

For example, a student might stop in to play with a sick child or take the sick child’s sibling to the Pediatric Playroom for a little while. “If CFTK raises less money, but students spend more time in the hospital with patients and families, then the organization has likely made a greater difference,” says Hendricks.

It is hard to overstate the importance of resources that help with the emotional aspect of a child’s hospital stay, he says. “A child’s negative experience at the hospital can mean they’ll fight caregivers and medical providers in the future about the treatments they need.”

Hendricks references a CNN story that features several families of children with special needs. These families hold up a chart which illustrates all the people involved in the care of their child. The charts are overflowing and point to the number of resources and stresses each family confronts.

“It’s exhausting,” he says. “As soon as families get a diagnosis, they immediately recognize the medical problem they are facing. But it is easy to overlook how that single event then ripples through every aspect of their lives.”

Parents with kids who have chronic medical conditions often can’t go to work, for example. Or one goes to work and the other stays with the child, he says. Considering more than three-fourths of parents with children under the age of 18 years old are employed, the diagnosis rapidly creates a major strain on the family as income is reduced and medical expenses increase.

“The medical problem becomes a financial problem which then often turns into a relationship problem,” says Hendricks. He recalls feeling like a worse spouse, employee, son and friend after his own daughter’s diagnosis. In his view, CFTK makes an impact by helping the problem remain a medical issue rather than spiraling into strains on the rest of the family’s life.

For Hendricks, Devine and other students who make the success of CFTK a top priority are inspiring.

“The people in the foundation are exceptional,” he says. “The students deserve all the credit for the organization’s impact. They are genuinely passionate about what they’re doing, and they are making a far bigger difference in their community than I did at their age.”

Devine never tires of hearing how CFTK makes a difference in the lives of patients and their families. 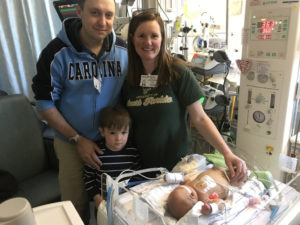 That’s why she was especially gratified to hear from Scott Dotson (MBA ’19), whose son Michael (twin brother of Thomas) was in the UNC Children’s Neonatal Critical Care Center (NCCC) since his birth on Dec. 20, 2018, until he died on March 7, 2019, after battling liver failure and thrombocytopenia (severely low platelet count). Dotson and his wife, Debra, have five other children under the age of six at home, and counted on UNC’s medical expertise and loving support.

“The Newborn Critical Care Center Family Advisory Board has been very helpful, with support groups, discounted meals for mothers who are breastfeeding, the Ronald McDonald Family Room and everything else that UNC Children’s offers the precious patients and families who spend so much time in that building,” Dotson wrote to Devine “From a fellow Kenan-Flagler student and grateful father of a child fighting for his life, I thank you for all that you do.”

As Devine prepares for graduation and a job in marketing and communications at Deloitte in New York, she is hopeful about the future of CFTK. As an alumna, she plans to keep in touch, and attend the UNC Dance Marathon and much more.

“This organization has stolen my heart,” says Devine, “and I love it with everything I have.”