Skip to content Skip to Programs Navigation
Fighting for others 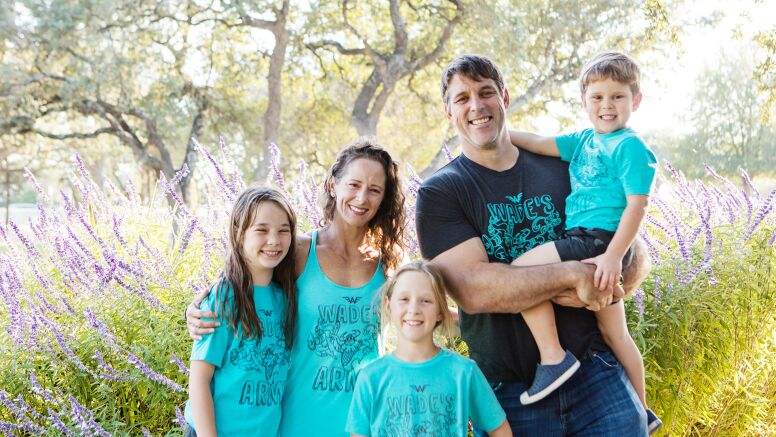 When Kate Shallcross Welbourn (MBA ’07) arrived at Carolina, she had a clear vision for her career.

Fiercely determined to rise to the top in real estate, she had come to UNC for a dual-degree program: an MBA from UNC Kenan-Flagler and a Master of Regional Planning from the Department of City and Regional Planning.

Welbourn succeeded in her chosen field – and then redefined success.

Today she is a Renaissance woman: raising three kids (twin daughters and a son) and leading Wade’s Army, a nonprofit that raises funds to support innovative pediatric cancer research in an effort to find a cure for neuroblastoma, which affects 800 children each year. The organization is a growing support network that also provides direct financial support for families’ immediate needs while their children are undergoing cancer treatment.

“If you had asked me 10 years ago where I thought I’d be now, I would have told you that I would be managing lots of money and wearing fancy clothes to work,” she says. “I’m not.”

After graduating from Emory, Welbourn worked for a boutique real estate firm. Her mentors advised her real estate career would stall if she didn’t get finance experience, which led her to earn an MBA.

But, as Welbourn will tell you, “Life is funny.” She spent her energy applying to schools in California, but then changed her mind at the last minute, and headed to North Carolina, following in the footsteps of her mentor, Katharine Kelley (BA ’86), and join her sister, Lynne Shallcross (BA ’04), who was in her senior year at the Hussman School of Media and Journalism.

Life has unexpected twists, and you have to be ready to adapt, she says, and agility is an important trait needed to lead organizations.

What she didn’t know then is that these kinds of changes would keep coming.

Welbourn scrambled and applied to UNC Kenan-Flagler in the fourth round. “The real estate scholarship was sprinkles on top of the ice cream,” says Welbourn.

UNC Kenan-Flagler welcomed Welbourn with open arms, and she focused her MBA studies in the real estate concentration.

She loved her Carolina experience and the spirit of giving in the community. “UNC Kenan-Flagler was the right place for me,” she says. “When you meet someone from UNC Kenan-Flagler, you know he or she is a grounded, good person.”

More than anything, UNC Kenan-Flagler gave her the know-how to achieve goals. She learned how to collaborate, ask for help and find resources.

“What UNC Kenan-Flagler gave me was confidence,” she says. “Even if I didn’t take the class, I could figure it out.”

That confidence would take her far. After graduation in 2007, she worked at Black Rock, where she managed a portfolio of real estate assets in Newport Beach, California. She felt fortunate to have gotten her dream job as the Great Recession loomed.

She also met her husband, John Welbourn, a 10-year National Football League veteran who is now CEO of Power Athlete.

By 2011, the economy was dipping again and life took another turn: Welbourn was expecting twins. The time was right to shift gears, and she went to work as COO of Well Food Company, co-founded by her husband.

During her pregnancy, Welbourn learned that her high school soccer teammate, Heather DeBruin, was facing every parent’s worst nightmare.

Wade, one of DeBruin’s 18-month-old twins, was diagnosed with neuroblastoma, an aggressive form of pediatric cancer, and died a few months later. In his honor, the Welbourns founded Wade’s Army to raise funds to support families like the DeBruins and research for a cure.

“We want to help and bring positive energy around a tragic loss and devastating disease,” Welbourn says.

She encouraged her husband to use his social media platform to raise awareness of her friend’s fight and others facing the same challenges. Together, they started small. They held a T-shirt drive and a special workout in Wade’s honor. Initially, they raised $15,000.

The next path in her journey took form when they disbanded Well Foods and the Welbourns had their third child. It was then she turned her talents full-time to Wade’s Army. Over seven years, the group raised $1 million to support families and fund critical research.

The Business School and the University have played pivotal roles in the success of the Wade’s Army, she says. “The UNC Kenan-Flagler climate was so supportive of me as a student and that network continues to work, extending into the nonprofit arena and my work with Wade’s Army.”

That network also connected her to Carolina in a new way: Supporting the important work at the UNC Lineberger Comprehensive Cancer. Classmate Margaret Dean (MBA ’07), a senior director at Covance, serves on its board of advisors and told Welbourn about Dr. George Hucks, a pediatric oncologist focused on neuroblastoma. UNC Lineberger is one of a few academic medical centers in the U.S. with the faculty and facilities to discover, design and deliver T-cell (CAR-T) therapy to fight cancer using a patient’s own T-cells.

Wade’s Army donated $200,000 to support Hucks’ work. “We’re helping to keep this little boy’s memory alive and fill this hole for his mom and help others have a better experience,” says Welbourn.

Recently, she hired the first full-time director of Wade’s Army to further advance its work. She wants to see the FDA improve its process for getting children into clinical trials, and seeks advancements in the quality of life and survival rate of those diagnosed with neuroblastoma. Wade’s Army has committed an additional $200,000 to another organization to support clinical trials.

Some of the other work of which Welbourn is proud of is building playgrounds at the homes of patients in the wake of the pandemic. In addition, she hopes to continue to promote healthy living and the availability of better nutrition for patients in the hospital.

This dedication to wellness is a big part of Welbourn’s own life. She met her husband at a cross-fit gym, and describes herself as a fitness enthusiast and her new challenge is to pursue her childhood dream of being an equestrian. Her family enjoys spending time outdoors in Austin, where they live now.

Wherever Welbourn finds herself in the world, she always turns to her time at UNC Kenan-Flagler. She is amazed at the support Wade’s Army has received from her classmates.

“Every year, they buy T-shirts and take pictures of their family in the shirts to build awareness of our work,” says Welbourn. “It’s so cool to have that community be so supportive.”

Welbourn continues to gain inspiration from the School.

“We can’t anticipate the ups and downs in our life,” says Welbourn. “This is my third career since graduation, and UNC Kenan-Flagler gave me the tools and network to do it all.”