Earning your MBA with your partner 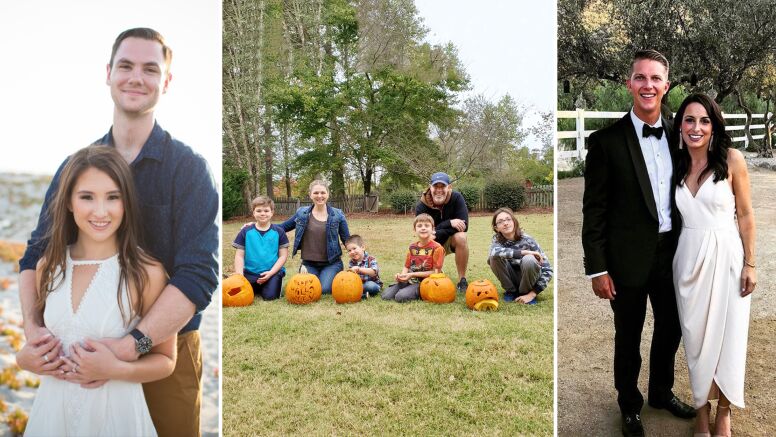 When you and your partner both want to earn MBAs, what’s the best approach? With two careers, two personalities, finances and a relationship to balance, it’s a complicated decision. At UNC Kenan-Flagler, couples have options. 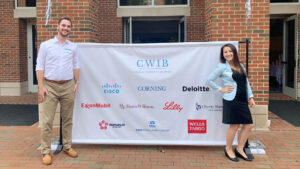 Harmonie Jacobson and Andrew Jacobson (both MBA ’20) spent many hours weighting full-time versus part-time programs, and earning their MBAs together versus staggered. They decided that taking the journey together would be more rewarding and a lot more fun.

Harmonie came from a background in biotech and Drew from corporate finance, and they knew having an MBA would help them advance into leadership positions.

Based in San Diego, they each created a list of schools they wanted to apply to and the Full-Time MBA Program at UNC Kenan-Flagler featured prominently. Harmonie was drawn to the strong healthcare and technology offerings, and Andrew was drawn to the School’s track record in investment banking.

They were excited about the unique opportunity to learn together. They studied together for required courses and joined different career clubs to explore their own career interests independently.

They also travelled together – for a Global Immersion Elective to China and Japan, a trip to Greece and Hungary with friends one fall, and to Israel over spring break – an opportunity that couples studying separately didn’t get.

Reflecting on their time at UNC Kenan-Flagler, they agree earning their MBAs together was the right move and advanced their career goals. Now in New York, Harmonie is a program manager in business transformation and innovation at Google, and Andrew is an investment banking associate at BMO Capital Markets.

The MBA program also showed them new sides of their partner.

“Harmonie was president of Carolina Women in Business,” says Drew. “I got to see, in action, a lot of the really great qualities I knew she had and watch her execute her ideas and visions.”

“If I had asked Drew five years ago to come to a networking event with me the first answer would have been ‘No,’” Harmonie says. “But over the two years at UNC Kenan-Flagler, I definitely saw him get more comfortable with networking and many other skills you need to progress in a business career.” 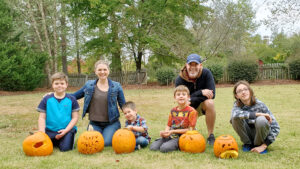 Brandon came from an engineering background and was looking to match his business skills to his technical expertise as he advanced into management. Cynthia wanted a competitive advantage in her own management career.

With a young family to look after however, the logistics weren’t easy: they needed a local school that was academically competitive and good value for money.

Naturally, they landed on UNC Kenan-Flagler and chose the Evening MBA Program.

“We sat down and talked about who made sense to go first,” Cynthia recalls. “At the time, we were talking about whether to have another baby, so we figured to be on the safe side he should go first.

“It was a good thing, because we’d been told it would take a long time to get pregnant, but it took a week!”

Despite the major upheaval at home, both agree the timing was right. Brandon was more empathetic and supportive when Cynthia enrolled having already been through it himself.

After learning about entrepreneurship by developing his own product while at UNC Kenan-Flagler, Brandon, decided to leave his large corporation to join a startup. Which has since been acquired by Cubic Mission Solutions, where he is now a director.

Meanwhile, Cynthia took the change management lessons she learned in the Evening MBA Program and supported her company, BASF, through a huge merger and acquisition, and now manages its North American supply chain operation for the agricultural products division.

(Read a profile of Cynthia by Poets & Quants.) 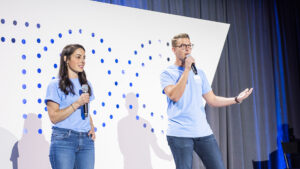 Evan Bayless and Abbe Bayless (both MBA ’19) took yet another approach. They were sponsored by their employer, Eli Lilly and Company, and they moved from Indianapolis to enroll at UNC Kenan-Flagler.

Abbe selected the Evening MBA Program because she wanted to continue working and advancing her career while getting her education.

Evan chose the Full-Time MBA Program because he was interested in pursuing some other industries. “I’m really passionate about global health, specifically the global water crisis,” he says.

Choosing UNC Kenan-Flagler was both practical and personal. The sponsorship program required that they apply only to top 20 programs globally, so that narrowed their focus, and of the schools they got into, UNC Kenan-Flagler stood out for its warmth and authenticity.

“We love the community in Chapel Hill, as well as the culture that UNC Kenan-Flagler creates. It’s actually very similar to Lilly,” says Evan. “The student body and faculty emulate these values of excellence and humility, in a way that is really powerful and truly propels the Business School forward.”

Indeed, one of the perks of enrolling in different programs at the same time was getting to combine their networks in this community. Evan made the most of the extracurricular opportunities in the Full-Time MBA Program, joining a band and DJing. He and his classmates and Abbe’s Evening MBA cohort frequently mingled at his gigs and other social events.

“The Business School has several different opportunities – full-time, evening, weekend and online programs – and it was great to get to meet people from diverse backgrounds and diverse experiences,” says Evan.

Professionally, Evan also could merge his existing career with his long-standing passion for global health. He interned throughout his MBA studies and spent over a month in Kenya with a company called Lifestraw, which provided clean water to over 1 million children in 2018. When he was finished, he forged a partnership between Eli Lilly and Lifestraw which continues today.

This wasn’t the only partnership that was strengthened by his business school experience. Like the Jacobsons, Evan says that studying together also showed him new aspects about his wife.

“She was working full time and taking classes in the evening, so it just showed her persistence and diligence and commitment to excellence in all that she does,” he says. “She amazes me with her strength and discipline.”

They are back at Eli Lilly in Indianapolis now, where Evan is global brand manager of the diabetes unit and Abbe is a payer brand manager for the U.S. bio-medicines business unit.

Both were military flight instructors based in Florida when they started thinking about levelling up their professional qualifications. They chose the online MBA program at UNC Kenan-Flagler because it was one of the best MBAs that didn’t require them to travel to campus to attend classes.

Though they didn’t initially plan on taking the same classes, they gravitated towards similar subjects like finance and found they enjoyed studying together.

Having each other for support meant that neither felt isolated studying online, and in-person Summits allowed them to build an even stronger rapport with classmates. They graduated in 2015.

“We recommend it,” Cera says. “Devon and I both had such a positive experience with it that we’ve had quite a few colleagues decide to go the same route!”

“Really try to understand how welcoming a school might be to couples as you go through the application process,” Harmonie advises. “We talked to a couple of recruiters who didn’t seem like they were welcoming of us applying together, but UNC Kenan-Flagler actually asks that in the application, so that was a good sign.”

For couples who decide to stagger their degrees, the Stantons caution against losing momentum after the first MBA is completed.

“It would have been a huge regret if I had never started,” says Cynthia. “Brandon helped push me to apply and I’m very appreciative for that. It’s never going to be a perfect time, so just do it!”

Whatever you choose, Evan and Abbe emphasize the importance of aligning with your partner on the “why.”

“What is the driving factor for you to go back to get your grad degree?” Evan asks. “I think once you’re able to effectively articulate your ‘why’ you will understand which programs make the most sense for you and your spouse.”