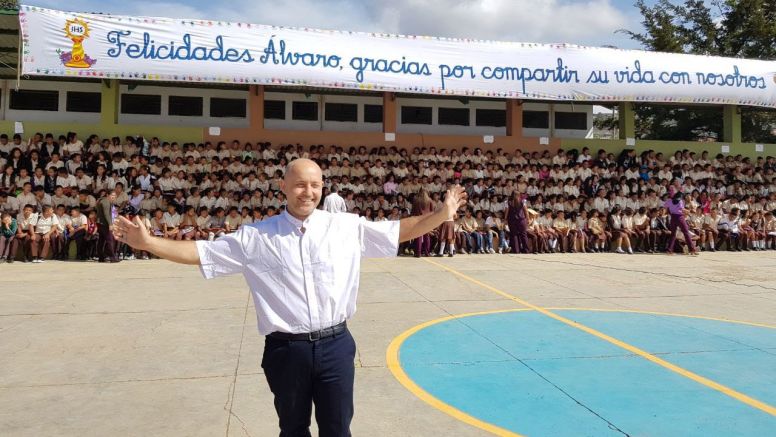 At first, the story of Alvaro Ramos (MBA ’06) reads like a traditional story of business success.

After growing up in an upper-middle-class family in Madrid, Spain, Ramos worked at an international law firm, Freshfields Bruckhaus Deringer, where he advised U.S. and U.K. investors in mergers and acquisitions in real estate.

When he enrolled in UNC Kenan-Flagler’s full-time MBA Program, he pursued concentrations in real estate, finance and sustainable enterprise. He interned with the UNC Management Company, and worked with the Leonard W. Wood Center for Real Estate Studies, where he collaborated with David Hartzell, Steven D. Bell and Leonard W. Wood Distinguished Professor in Real Estate, to set up the first student-run real estate fund. He also did research for the Bank of America Capital Access Funds through the Kenan Institute of Private Enterprise.

After graduation, Ramos headed to London to work for Bank of America in its investment banking division. His next career stop was Azora, a private equity firm specializing in social housing,

While there he set up a foundation to send funds to organizations in Latin America to avoid the cumbersome administrative processes of non-governmental organizations (NGOs). The idea was to get the money directly to the poor who need it most.

“That allowed me to get to know the roots of poverty and reminded me of the inequalities in the world,” he says.

His desire to help others began when he was a kid. He had a 4-handicap when golf was a minor sport in Spain in the early 1990s. Many kids from Madrid’s poor neighborhoods dropped out of school to work at the golf courses as caddies so they could earn money for their families. The inequality troubled him and fueled some of his decisions down the road.

“I felt it was about time to do something to help the poor then, left my job and tried to set up companies to employ young people in the most impoverished areas,” he says.

He was on the road to business success when he took an unexpected turn. He decided to put his business skills to use for the good of others – as a Catholic priest.

Ramos had reached two conclusions. Becoming become a priest was a means of achieving his altruistic goals. “Becoming a priest allowed me to partner with God to help the impoverished with the best ‘business plan” to change the world,” says Ramos, who was ordained in 2018.

He also recognized that education is the key to lifting people out of poverty. That’s when he became involved with a Christian mission in Honduras that operates through Asociación Colaboración y Effort (ACOES), a Honduran NGO that develops educational, assistance, health and construction projects for disadvantaged people. The NGO’s mission is to eradicate poverty by educating students from kindergarten through college.

“I live in one of the poorest neighborhoods in Tegucigalpa where the headquarters of the ACOES is located,” he says. “The organization is run by the students we help. We reach 12,000 students in 12 regions with an economic impact of roughly $2.5 billion.

Ramos wants students to feel connected to their community and stick around and save it by having required survival skills as well as book learning.

“We must create a new generation with a mindset to take care of the whole country,” he says. “They must undo the corruption and help people, who need food, proper education and a sense of responsibility. I have an interest in helping people who did not have the opportunities I had, and I want to make an impact on the world.”

Ramos using the skills he developed at UNC Kenan-Flagler and during his corporate career. “I’m a priest now,” says Ramos, “but running a mission is akin to running a business.”

He recognizes the importance of economic prosperity and how it influences communities and their people. Understanding the details of corporate finance, marketing and general management give him an edge, Ramos says. Among his aspirations is helping nonprofits see the light.

“NGOs and missions need to change their mindset,” he says. “They must be run like companies. They need to pursue quantifiable results, like the P/E ratios and cap rates used by corporate America, measured against the donations they receive, and be efficient while they are doing good.”

“Educational expenses for our students average $8,800 to $9,500 in periods of 10 to 15 years. Once the students graduate from college, they can easily get jobs that pay at least $300 a month,” he says. “This equates to $316,000 of economic value based on the working life of the student and more than a 50% internal rate of return based on our investments,” Ramos says. “This reminded me of the deals we studied in our real estate finance classes at Kenan-Flagler – as good as it gets!”

As Ramos continued his journey, he held true to a core belief. “The world is just one family,” he says. “We must realize humans have a mission to change the world. We have to make it not only better but heaven on earth.”

Ramos wants students at business schools to think hard about what they want their purpose to be. He wants people to understand and consider those who are less fortunate and who have not had the same opportunities.

“In the MBA world, we are worried about making money,” says Ramos. “While that’s important, it’s not enough. We must pay attention to the social impact we’re having.”

Although Ramos grew up privileged, he now lives a much simpler life in Honduras. He has no salary and lives among the poor he is helping.