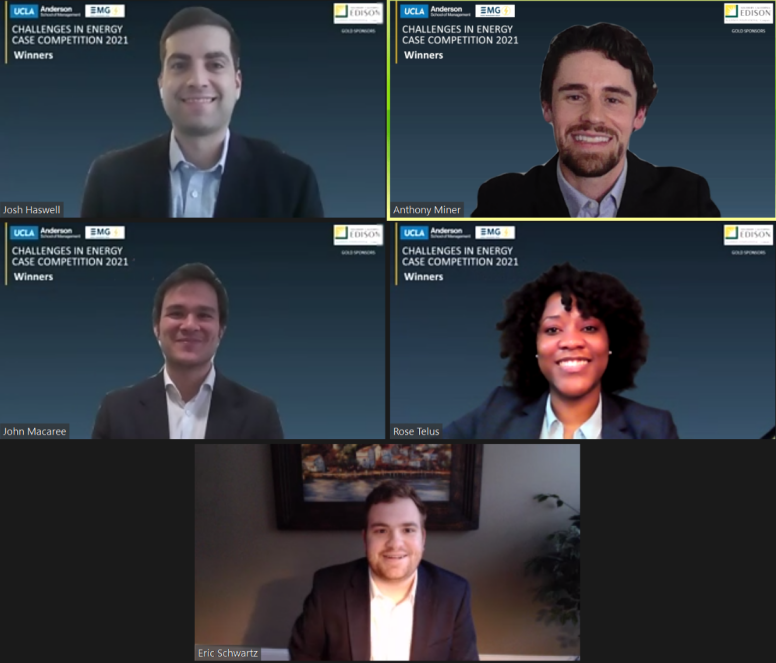 The case, sponsored by Southern California Edison, prompted students to develop a business plan for a ventures division of an incumbent energy player to create a new business line that is profitable, and addresses social and environmental justice, focusing on the triple bottom line. “Due to our team’s unique mix of talent, we were able to develop a business plan in four days focused on leveraging renewable energy to support marginalized communities.” say Josh Haswell.

Unlike years past the team was unable to travel to Los Angeles, so they presented via Zoom throughout the day long competition. During round one Kenan-Flagler’s team competed against 10 other teams, representing the top energy MBA programs throughout the country. At lunch, they were selected alongside teams from Dartmouth, Duke, and Virginia to move onto the finals. However, before the final round, the team was given a “twist” in the case and had only a few hours to adjust their presentation and incorporate this new information. After the finals, there was a networking reception where the winners were announced.

“It was an absolute pleasure working with four first-year MBAs as part of this competition” says Anthony Miner. “They have worked really hard throughout this pandemic, so it was great seeing their efforts rewarded by leveraging their diverse experiences and learnings at UNC to bring home the win.”

“The UNC Energy Center teaches students the energy value chain and the importance of blending both technical and financial acumen to be successful in the business of energy” says Stephen Arbogast, Director UNC Kenan-Flagler Energy Center. “In case competitions energy practitioners get to engage with students in a different way than the interview process and witness their abilities firsthand. Our team winning this competition shows that they can excel as future energy leaders.”

The team said they look forward to next year and welcome the chance to three-peat for UNC Kenan-Flagler. “This was really fun guys, I’m glad I did this!” remarked Rose Telus after the competition.