The Midstream Promises Value – Unpacking the Market’s Most Underappreciated Sector 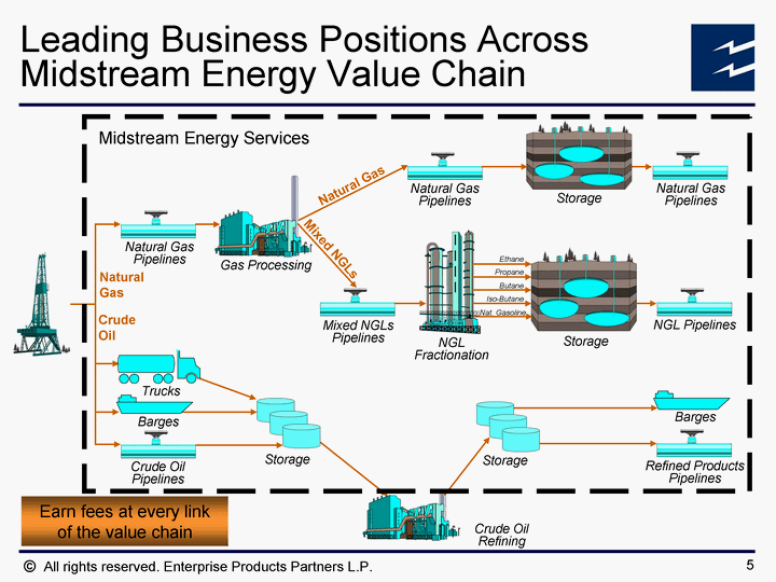 They say every ‘dog’ has its day but one sector seems stubbornly left behind as the stock market explores new heights – the oil & gas Midstream.  Why is this sector poised for dramatically better financial performance?  Why have these prospects been studiously ignored by market analysts – these are the stories we have to tell.  In the process we’ll say something about the Midstream’s value to U.S. efforts to address climate risk.

There are four ways in which a market sector can enjoy better future prospects than its recent past.  First comes the general state of the economy.  If the economy is picking up, this rising tide will raise all boats.  Second, specific sectors can see their prospects improving.  Most industrial sectors face cycles.  When a sector’s activities start ramping up, financial performance recovers.  Third, individual companies have their ups and downs.  Sometimes they struggle with competitive challenges or management mistakes, and are punished with declining valuations.  Other times they show recovery or surprising breakthroughs; then the opposite happens – valuations can soar.  The fourth factor has to do with the market itself.  At any given moment, the market favors some sectors and neglects others.  There are always specific reasons why it does so, and these are routinely reported in the financial press. However, momentum and other factors can cause big time lags between developments in the real economy and their reflection in sector and company valuations.  These lags can mean opportunity for alert investors.

We need not spend much time on the general state of the economy – it is robust.  U.S. economic growth continues at a stronger pace than in recent years.  Moreover, something like synchronized growth now characterizes the world’s major economies.  Energy demand, including oil & gas, continues to grow.  U.S. exports of crude oil, gas, refined products and chemicals are at record levels.  All of this growth is reflected in the second factor, sector recovery for the Midstream.  Existing pipelines, storage and separation facilities are full again.  Indeed, we see weekly articles highlighting infrastructure bottlenecks awaiting resolution: e.g. the Permian, the Bakken, the Marcellus, New England and Western Canada.  As for individual companies, the most prominent Midstream companies are recovering nicely from their 2015-16 stress period.  Kinder Morgan, the country’s largest Midstream player, has not only de-levered.  KMI has boosted its dividend and announced improving guidance for 2018.  Kinder’s trend is not atypical; most Midstream players are forecasting improving results.

All of this blue sky makes the fourth factor the most interesting.  The lag between Midstream sector/firm improvement and the market’s recognition of same is noteworthy.  Take KMI again as an example.  In 2014 it converted to a ‘C’ corporation and sported a stock price of $44/share.  Today its share price is ~$17/share, a decline of over 60%.  Moreover, the improved prospects cited just above have done nothing to move the stock.  Today’s KMI stock price is 20% below its 52 week high. This result is not atypical.  Improving prospects on multiple fronts have not moved Midstream valuations.

Why has this happened?  Two factors account for the Midstream’s underperformance.  The first is that the sector brutally disappointed investors in 2015-16, destroying great chunks of value in the process.  Second, the market’s model for valuing the Midstream is in transition.  This second change is not unrelated to the first.

Before 2018, most Midstream companies employed Master Limited Partnership (MLP) structures.  These tax-advantaged entities allow firms to avoid income tax at the partnership level.  Midstream firms then took this advantage a step further.  Most adopted a practice of paying out all ‘distributable cash flow’ to their unit holders.  This made the MLPs beloved holdings for income-oriented investors; they not only receive high yielding payouts but enjoyed the fact that a substantial portion of each distribution (roughly the portion reflecting depreciation) was treated as ‘return of capital’ not taxable for the unit holder.  MLP investors thus enjoyed a high yielding investment with a partially tax-free character.

The downside of this approach was its acceptance of excessive financial risk.  By paying out all distributable cash flow, MLPs were forced to make repeated trips to the capital market to fund anything beyond maintenance capital expenditures.  This meant that organic growth, acquisitions, financial underperformance and sometimes even distribution growth all depended for funding on raising new capital.  On top of this the nature of the Midstream business promotes investing on a leveraged basis.  Pipelines, terminals, etc. are ‘low risk/return’ contract businesses; these typically earn single digit returns on capital.  Leveraging these projects allowed MLPs to seek more-attractive-looking double digit Returns on Equity.  Unfortunately, this approach to project economics amounted to doubling down on capital structure and refinancing risks.

By late 2016 the tide was flowing out and investors discovered that MLPs were not wearing bathing trunks.  The poster child for this event was the aforementioned KinderMorgan.  Now a C corporation, KMI still retained the financial legacy of its MLP origins. The Standard & Poor’s rating agency expressed doubts about KMI’s debt levels and ability to fund maintenance capital expenditures.  This exacerbated existing concern within the analyst community, and KMI’s stock price fell.  When the rating agencies then expressed doubts that KMI could maintain its debt rating, the firm responded by cutting its distribution by 75% and pledging deleveraging.  That sent its stock price down precipitously, and it bottomed out at $12/share.  A number of other MLPs, notably Energy Transfer Partners and Williams, suffered similar if less dramatic falls from grace.

As the dust settled, income investors fled the Midstream sector.  Secure, growing payouts had turned out to be vulnerable and accompanied by big risk of capital losses. Meanwhile, Wall Street firms began a reconsideration of how to value the Midstream.  Some analysts declared the MLP/distribution growth model no longer valid.  They instead argued that Midstream firms be valued like utilities, i.e. slow growth EPS/dividend yield plays.  In view of recent its history however, analysts also argued the Midstream is riskier than regulated utilities and thus should bear a higher cost of capital.

Midstream valuations thus struggle under these twin legacies – massive value destruction in the wake of their risky financial structures being toppled and Wall Street’s ensuing ‘re-rating.’  The memory of value destruction fades over time.  Lumping Midstream firms with low growth utilities is another matter.

The analogy of Midstream firms to utilities is partially apt at best.  Both asset classes seek to attract income investors, and both tend to be adversely impacted by rising interest rates.  There the analogy ends.  Today’s Midstream is experiencing high utilization rates and enjoys a raft of organic growth opportunities.  Utilities face flat electricity demand and disruptive competition from multiple directions.  Midstream valuations are also coming off a floor whereas utilities are coming down from recent zero-interest rate environment peaks.  Finally, Midstream firms have corrected many of the ills which accompanied their downfall.  Balance sheets have been de-levered; complicated MLP structures are being simplified or converted to C corporations; distribution cuts are history and payouts are rising.  The aforementioned KMI raised its dividend to $0.80/share (annualized) in 2018 with plans to reach $1.25/share in 2020.

There is a final note to analysts and investors wondering where Midstream growth will come from beyond 2020.  Another underappreciated part of the Midstream story is the role it will play in addressing climate risk.  This aspect is missed because the Midstream gets lumped with other oil & gas businesses.  The Midstream climate story begins with the better-known aspect – enabling utilities to access natural gas and phase out coal-fired generation.  This has allowed less carbon-intensive natural gas to overtake coal as the primary fuel used in power plants.  Less appreciated is natural gas’ role in accommodating additional renewable power supplies.

Today’s dominant narrative suggests that wind/solar plus storage can supply all needed electricity and decarbonize the grid – all at acceptable costs.  This narrative is greatly exaggerated.  Intermittent wind/solar require backup for when nature doesn’t cooperate or in locations not furnished with much of either.  Battery storage is helpful for managing minute-to-minute and some hourly fluctuations in renewable supplies, but rapidly becomes uneconomic when power must be stored for next week, let along next month or the winter.  It then turns out that there is synergy between renewables and natural gas power plants.  The latter can ramp up or down quickly, can run as base load, or can serve to provide peaking capacity.  Their high reliability factor enables them to compensate for renewables’ unpredictability.  One need only look at California, the leading experiment in renewables mandating, to see this effect.  California’s power supplies contain a copious amount (~25%) of in-state natural gas and a sizeable component of similar power imported from neighboring states.  Without this tranche of flexible and baseload gas-fired capacity, California’s grid would quickly become unstable.

Thus, the Midstream will see continued growth in routing America’s superabundance of natural gas to locations seeking this marriage with renewable power.  On top of this is the likelihood that sooner or later our climate efforts will come to focus on capturing and storing CO2.  The locations for capture will not be the same as where CO2 will be stored.  In other words, sooner or later our climate strategy will start moving CO2 around.  Who then will get the call?  You guessed it, the Midstream companies like KMI which already handle CO2 transport in locations like west Texas.

Whether Green or Black, you have to like the Midstream’s chances of coming back.

(Disclosure: The author owns shares in KMI and other Midstream companies along with shares in oil & gas, utility and renewables firms)