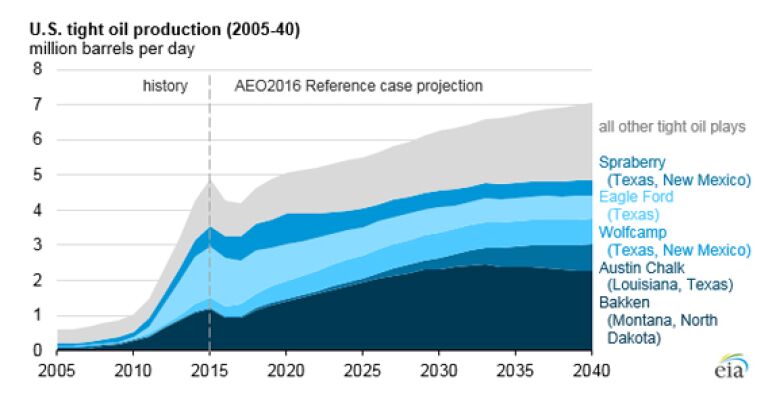 A principal contributor to this report, Faouzi Aloulou, spoke at the Kenan-Flagler Energy Center’s 2016 conference “Global Fracking: What has to change for it to be a game changer?”

U.S. production of tight oil and shale gas has increased significantly from 2010 to 2015, driven by technological improvements that have reduced drilling costs and improved drilling efficiency in major shale plays, such as the Bakken, Marcellus, and Eagle Ford.

Production from tight oil in 2015 was 4.89 million barrels per day, or 52% of total U.S. crude oil production. From 2015 to 2017, tight oil production is projected to decrease by 700,000 barrels per day in the Reference case, mainly attributed to low oil prices and the resulting cuts in investment. However, production declines will continue to be mitigated by reductions in cost and improvements in drilling techniques. The use of more efficient hydraulic fracturing techniques and the application of multiwell-pad drilling, as well as changes in well completion designs, will allow producers to recover greater volumes from a single well.

As oil prices recover, oil production from tight formations is expected to increase. By 2019, Bakken oil production is projected to reach 1.3 million b/d, surpassing the Eagle Ford to become the largest tight oil-producing formation in the United States. The Bakken, which spans 37,000 square miles in North Dakota and Montana, has a technically recoverable resource of 23 billion barrels of tight oil that can be produced based on current technology, industry practice, and geologic knowledge. Bakken production is projected to reach 2.3 million barrels per day by 2040, almost a third of the projected U.S. total tight oil production.