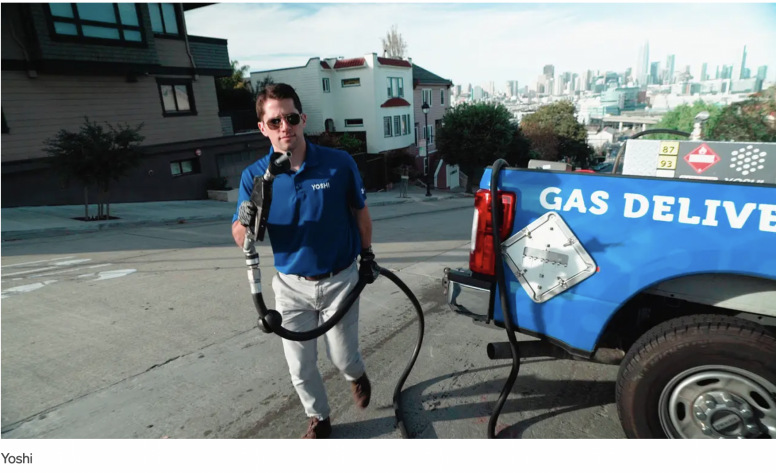 When Ryan Meyer (MBA ’19) flew to San Francisco for his summer internship at Yoshi, he hoped to return to Chapel Hill with a full-time offer. He achieved his goal – just not in the time frame he expected.

He had joined UNC Kenan-Flagler’s full-time MBA Program with plans to move into the technology industry after working at ExxonMobil for seven years. He was drawn to the innovation happening in the transportation and mobility arenas. “I was particularly interested in joining a startup or technology company where I could be a part of building something and creating value in new ways,” says Meyer.

And he started his internship search – mostly doing his own off-campus recruiting at firms that weren’t scheduled to visit campus. He tapped his professional network and UNC Kenan-Flagler alumni to seek opportunities, and carved out time to reach out to Tar Heel alumni at target companies via LinkedIn.

“People spoke with me, but most conversations didn’t turn into solid leads,” Meyer says. “In the spring, when almost everybody else had an offer in hand, I was still looking. However, discussions progressed and a former ExxonMobil colleague introduced me to the co-founders at Yoshi.”

Yoshi is a mobile app that brings fuel and car care services to customers wherever their vehicles are parked. ExxonMobil is an investor and co-led the start-up’s Series A round with General Motors. With Meyer’s background in energy and Yoshi’s plans to raise additional capital, it was a good match.

Meyer interviewed with Nick Alexander, CEO and Bryan Frist, COO and president, in April 2018 and started his internship in May. When he sat down for a mid-summer check-in in June with Alexander, the CEO commended Meyer for his work and asked him to join the company in a full-time position.

Meyer was thrilled – and then realized they had different start dates in mind.

“You mean start now?” Meyer asked, to which Alexander replied, “Yes, right away.”

Caught off guard by the timing, he shared how important finishing his degree with the Yoshi founders. “They were willing to wait for me to do so, but explained that the opportunity in May 2019 would be very different in July 2018. Timing is key with startups.”
Deciding whether to stay in San Francisco or return to Chapel Hill was not easy. He talked with family, friends and the wider Carolina community – classmates, professors and alumni, including those with background with startups.

He also consulted the MBA Program Office to explore his academic options. Their response: “We can make it work. We’ll find a way.”

And they did. Meyer is finishing his studies by a combination of courses offered by the full-time MBA Program on weekends and the MBA@UNC Program online. “Their flexibility and support in working with me to find a path for completing the credits needed to graduate with my classmates in May 2019 was huge,” he says.

About a month after he received the full-time offer, Meyer started as head of sales and partnerships at Yoshi.

Today the firm has customers in over 20 metropolitan areas across the U.S. “I am focused on our growth,” he says. “More and more services are trending towards delivery, and our goal is to make Yoshi the leading consumer brand in the U.S. for fuel delivery and car service that comes to you.”

The company’s mantra is “Keep moving” and that’s what Meyer is doing these days with a full-time work and academic workload.

“When I flew to California for the summer – with just two suitcases – I never considered I might end up staying longer than 10 weeks,” he says. “I was excited about everything that my second year in Chapel Hill would hold, especially spending time with my classmates and delving into electives.”

Chapel Hill is home for him. “Giving up my second year was hard – the opportunity to spend more time with my parents and fully enjoy everything the community and School have to offer – was difficult,” he says. “As things played out, I realized the fit and the timing were right for me to jump in at Yoshi.”

After he made his decision, he flew back to Chapel Hill in August 2018 to reconnect with classmates who were returning from their summer internships. “They were bummed that I was not coming back full-time, but they were so supportive and excited for me and my role at Yoshi.” And even as students without paychecks, some signed up to be Yoshi customers, he says with a grin.

Despite the distance, his connections to UNC Kenan-Flagler remain strong. He returns one weekend a month for classes during the 2019 spring semester. Raleigh is one of Yoshi’s newest and fastest growing markets, so he typically schedules business meetings in the Triangle when he is in town for classes.

Meyer hopes to be a resource on the West Coast for his classmates and reassurance for students still looking for internships and jobs. “The career search can be a roller-coaster for full-time students, especially those who opt not to go the traditional on-campus recruiting route,” says Meyer. “I’m lucky to have found a fit at Yoshi and can appreciate that sometimes it can be just one break that opens a door.”

And the benefits of taking weekend and online classes while working are clear. “I have the ability to take what we’re studying and discussing in our classes, and apply those approaches right away in my daily work.”

He describes it as the best of both worlds: finishing his degree and pursuing the opportunity he was seeking by coming to business school.

“I’ve been extremely lucky to get to choose my own adventure,” says Meyer. “Right now, I have one foot in the business school world and one in the work world. I am grateful.”