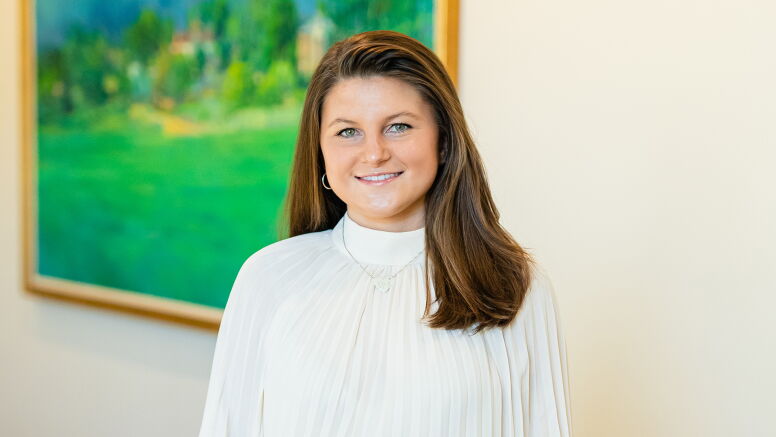 McCauley Palmer (BSBA ’22) is unafraid of what many fear most: failure.

“When failing is the worst thing that can happen, it’s not a good enough reason not to do something,” says Palmer. “I use fear of failure as a cue. If something scares me that’s why I do it.”

That mentality served Palmer well at UNC Kenan-Flagler Business School. Entrepreneurship attracted her, in part after seeing societal changes that can result from innovative business ideas, but she wasn’t sure exactly what that meant for her studies.

She wanted challenges and growth. She wanted to pursue work that mattered and had the power to change lives. She wanted to feel free to explore anything that excited her at any given moment. She got it at UNC Kenan-Flagler. 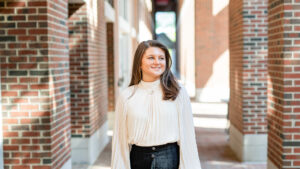 “I felt at home here from day one,” says Palmer. “You feel the support right away. I got something out of every single experience I’ve had at UNC Kenan-Flagler.”

She feels prepared for her next big experience: working as a financial analyst for Amazon based in the San Francisco Bay area. She’s been assigned to a part of Amazon’s operations, optimizing costs and improving quality. She’ll likely travel a lot to where Amazon needs her the most to help with projects such as its aircraft transportation division Amazon Air or its Amazon Go chain of cashier-less grocery stores.

The position follows Palmer’s summer internship with Amazon, which she calls the biggest growth experience of her life. She worked on a project making staffing costs more accurate and predictable.

“What attracted me to Amazon was the same thing that I loved at UNC Kenan-Flagler,” says Palmer. “It’s an environment where you’re encouraged to try new things and you feel safe doing so. It’s where you can get things done.”

Palmer’s journey at UNC Kenan-Flagler was unconventional because that’s how she wanted it. She arrived from Denver, North Carolina, the type of small town where you always see someone you know at the grocery store and everyone always gathers for Friday night football.

Her father inspired her to pursue business. He is a self-made entrepreneur who dropped out of college and found great success building homes and investing in real estate in Denver. She admired his drive and independence. He always had one rule for his daughter and told it to her every day for as long as she can remember: Make as many mistakes as you can today.

That’s why she always felt safe trying new things. She wasn’t failing. Instead, he assumed that she would learn and grow from any mistakes.

Palmer came to UNC-Chapel Hill in the Assured Admission Program at UNC Kenan-Flagler along with her entire tuition covered by the Business School’s Helen Craig Wardlaw Fund. She jumped right in, studying in Cape Town, South Africa, in the Undergraduate Business Program Global Immersion Elective. The course was eye-opening, especially when students met aspiring entrepreneurs with very limited resources. When they talked about their business structures, none of them mentioned pricing, and a Wi-Fi café wasn’t charging people to access the internet.

“None of them talked about charging anything because that had nothing to do with why they were doing it. They were just trying to give back,” says Palmer. “For me that was a huge perspective shift of what a business can and should do. It stretched my concept of business.”

Palmer dedicated herself to exploring disparate sectors of business, especially those working to benefit the common good. When something excited her, she dove right in. When she didn’t know anything about a particular subject, she dove right in, too. 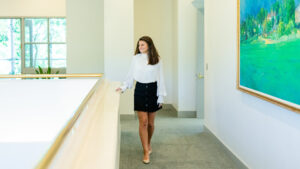 She was selected as a Kenan Scholar, a program designed for students committed to private sector work that benefits the public and based at the Frank Hawkins Kenan Institute of Private Enterprise. She worked as a sustainability associate with the Ackerman Center for Excellence in Sustainability, and worked on a project exploring the role sustainable development can play in recovering from a recession.

While studying at the London School of Economics for summer school she attended a lecture on artificial intelligence and bias in technology, though she had no idea what they meant at the time. The subjects fascinated her so much that she added computer science as a minor and led a project for Rethinc. Labs exploring artificial intelligence bias in business organizations. She joined Delta Sigma Pi, UNC Kenan-Flagler’s co-ed business fraternity, and guided fellow students through the Allison Mentorship Program.

And somehow, she fit in an undergraduate honors thesis, exploring how the COVID-19 pandemic is changing the landscape of the modern workplace.

“The sheer number of opportunities at UNC Kenan-Flagler is amazing, but they’re also so diverse and welcoming to everyone,” says Palmer. “You feel like you’re seen and heard. If you take advantage of the opportunities and support here, it’s hard not to feel like it’s a big family.”

Despite her eclectic pursuits, one thing was constant during Palmer’s time at UNC Kenan-Flagler — her definition of success. And it won’t change.

“Being successful to me is leaving any place better than I found it,” she says. “It’s contributing. It’s giving more than I took from anything. If I don’t do that, I don’t think it was anything close to a success.”