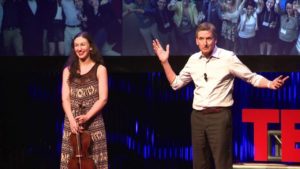 While Duke and UNC are fierce rivals on the basketball court, UNC’s Ted Zoller and Duke’s Kip Frey are working hand-in-hand to ensure that both schools are leaders in entrepreneurship and innovation.

Zoller, director of the UNC Kenan-Flagler Center for Entrepreneurial Studies, and Frey, interim director of the Duke Innovation and Entrepreneurship Initiative, are sponsoring residencies for four thought leaders in entrepreneurship. These renowned innovators from around the U.S are sharing their insights and experience with faculty and students at UNC and Duke.

The residencies are supported by a grant from the Keohane Distinguished Visiting Professorship, created by former UNC Chancellor James Moeser in honor of former Duke president Nannerl Keohane’s efforts to bridge the two universities. Entrepreneurship is one of the areas of focus for this year’s professorship.

“We are committed to staying on the cutting edge of what’s happening in pedagogy, research and theory in entrepreneurship,” says Zoller, T.W. Lewis Clinical Professor of Strategy and Entrepreneurship. “As one of the best programs in entrepreneurship with our ‘Learn, Launch, Lead’ model, we will benefit from having thought leaders of this character on campus and learn from them as we make our curriculum and programs distinctive in a global manner.”

The recipients of the professorship and their area of focus during their residency are:

While on the two campuses, each thought leader engages with faculty and students, gives a plenary address, and works with Zoller and Frey to raise the bar for their programs’ quality.

“All of them are  leaders in frontier areas for our program,” says Zoller. “By helping us benchmark national best practices in their areas of expertise, they will boost our gravitational pull and reach the next orbit. And working hand-in-hand with Duke, we can help build an even higher performing entrepreneurial ecosystem.”

Byers has been an important global leader for more than 20 years in the Stanford Technology Ventures Program, which has helped connect the innovation community with the entrepreneurship community, says Zoller. “He has been involved in a very central way with the development of the Silicon Valley ecosystem.”

After a successful career in Silicon Valley, including as a key leader at Symantec Corporation during its formation, Byers joined Stanford’s faculty in 1995. “I have enjoyed being part of a growing community of academics who identify with the discipline of innovation and entrepreneurship,” says Byers. “This field used to be just war stories but now it’s an evidence-based management science that’s a true accepted discipline.”

A mission of his center at Stanford is to help other colleges. “In the spirit of a rising tide raises all boats, we want to be part of that rising tide,” he says. “We’ve always been connected with lots of institutions around the world. Duke and UNC in particular are of interest since they are peer institutions with Stanford.  I have as much to learn here as to share.”

Sharing effective practices among Duke, UNC and Stanford in teaching innovation and entrepreneurship is one of the areas of focus for Byers. He is also tackling ethics, one of the most pressing issues facing Silicon Valley.

Highly visible ethics breaches in high profile companies blare from the headlines. Just two examples: Uber’s issues included price gouging, sexual harassment and the behavior of its former CEO, while Elizabeth Holmes, founder and chief executive of the blood-testing company Theranos, has been charged with fraud by the Securities and Exchange Commission.

“The relationship of ethics as a discipline to innovation and entrepreneurship education is something we need to take a good look at,” he says.

“Ethical lapses are disappointing, especially from an industry that has been seen as one of America’s competitive strengths and a meritocracy,” says Byers. “And there has been a somewhat laissez-faire attitude from those of us who have enjoyed establishing the field. We need to better address in our academic offerings the importance of values and behaviors and their consequences as it relates to being entrepreneurial and innovative.”

Byers met with Geoffrey Sayre-McCord, director of the UNC Philosophy, Politics, and Economics Program and Morehead-Cain Alumni Distinguished Professor of Philosophy. “Tom found a collaborator in Geoff who has examined ethics in modern business,” says Zoller. “We expect an impactful partnership to emerge between our faculty and our distinguished Keohane Professors.”

Byers also brings his knowledge on tech commercialization. “I am interested in how universities move inventions and discoveries from the lab to society,” he says. Byers met with Judith Cone, Vice Chancellor for Innovation, Entrepreneurship and Economic Development at UNC. “Judith is a terrific person and a dear colleague and friend since her days at the Kaufman Foundation long ago,” he says. “I’m here to do whatever I can to help her and the new leader at Duke New Ventures.”

“I admire the colleagues who have been chosen as the other three Keohane professors and am happy to serve alongside them,” says Byers.

Byers is excited about the breadth and depth of entrepreneurial and innovation educational opportunities at UNC and Duke.

“The momentum at UNC and Duke is unmistakable,” he says. “The Raleigh/Duke/Chapel Hill area as an economic region is exploding. I hope that I can help make some connections for the schools, identify some opportunities for the schools or help solve some problems that were holding back their even greater levels of success.”