The positive side effects of innovation 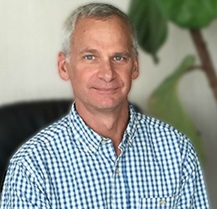 Patients battling cancer face many unknowns, including whether their treatments are working.

Physicians use radioactive tracers and PET/CT imaging scans taken before and after treatment to assess how a tumor is responding – but the process has drawbacks. Patients must undergo therapy and wait for inflammation to subside before tests can be done. Each scan exposes them to more radiation, and there are limits on the number of PET/CT scans that insurance will reimburse.

Dr. Charles Scarantino, a radiation oncologist at UNC Rex Healthcare, was determined to find a better, faster and less expensive way to determine whether treatments are effective. In 2011 he co-founded medical device startup Lucerno Dynamics with engineer Josh Knowland.

Under his leadership, Lucerno secured funding from an NC Idea grant and a North Carolina Biotechnology Center Small Business Research Loan. The firm developed a low-cost, non-invasive device designed to indicate whether a tumor is responding early in the treatment cycle.

The device was intended to work in conjunction with a PET/CT scan. But unlike a scan which produces a static image 75 minutes after a patient is injected with a radioactive tracer, Lucerno’s investigational device dynamically captures radiation counts throughout the uptake period, delivering results within minutes and helping physicians determine whether to continue a treatment plan or consider other options sooner. It can also be used for standalone testing – without a PET/CT scan – saving time and money and reducing radiation exposure.

During clinical testing at UNC Rex and Vanderbilt hospitals to show evidence the device could assess therapy response, Lucerno discovered another application for the device: quality control.

Human error can compromise the accuracy of PET/CT scan results. Scanners create images based on calculations of the amount of radioactive tracer administered to a patient. If an injection is not done perfectly, some of the tracer can get stuck in arm tissue instead of entering the vascular system. Because the injection site is usually out of view on a PET/CT scan, radiologists can’t determine whether a patient received a bad injection from looking at the results – and physicians might not be aware they’re basing treatment decisions on compromised images.

Lucerno’s device can detect whether an injection has been administered properly before the patient undergoes a scan. With millions of PET/CT scans performed each year and hospitals around the world reporting bad injection rates between 10 and 21 percent, Lattanze realized the device could make a more immediate impact as a quality control measure – and the firm would be first to market.

He consulted with Lucerno’s scientific advisor, Dr. David Townsend – co-creator of the PET/CT scanner – and sought guidance from world-class business advisors and the Triangle startup community, including the Blackstone Entrepreneurs Network and UNC Kenan-Flagler alumni. All agreed that the firm should pivot to focus on the quality control application.

“Support from the Triangle has been instrumental to get Lucerno going,” says Lattanze. “Our desire is to build and grow something that’s important to society and have it here in RTP.”

And they’re succeeding – in more ways than one.

Focusing on the quality control application will allow Lucerno to commercialize its device sooner than anticipated. Drawing from experience, Lattanze proposed prioritizing the launch of the device in Japan, where cancer is the leading cause of death.

“Most companies usually launch in Europe, then the U.S. and then Japan years later,” he explains. “Having lived and worked in Tokyo for four years, I knew that if a product meets a significant need and the company producing it has designed its quality management system to support the Japanese regulatory process, earlier approval may be possible in that market.”

Lucerno intends to launch in the U.S. and Japan. The company will also pursue other applications for its device in the future, furthering its mission to improve the treatment process for patients and doctors.