The greatest entrepreneur of all time 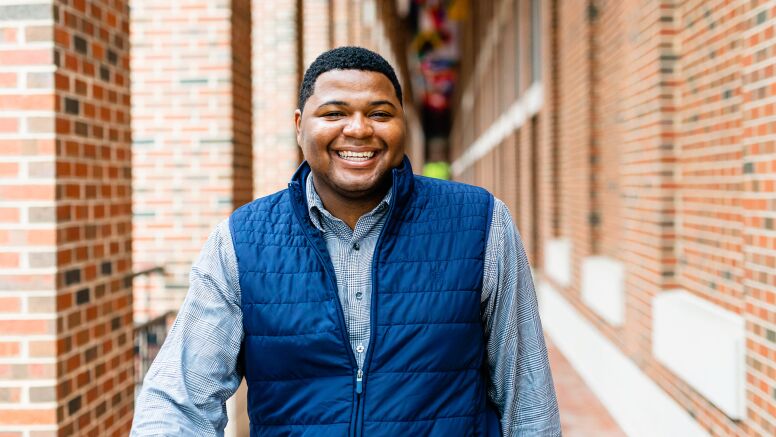 Tyrell Carter (BSBA ’21) got his first taste of entrepreneurship when he was in the fifth grade.

He was homeless and was selling bookmarks at school. He remembers sitting at the corner of the street in his hoodie and khaki shorts and thinking, “I’m going to be the greatest who ever lived.”

“I think I was totally crazy,” he laughs. Now that he’s found his calling as an entrepreneur, he believes he’s on the right path to achieving his dream.

Carter is the first in his family to go to college, a Carolina Covenant Scholar, and the founder and CEO of ANTE, which is incubated at not one, but two UNC startup labs.

It’s been an incredible journey, and one that UNC Kenan-Flagler had a big hand in shaping.

As a confident and ambitious kid from a small North Carolina town, Carter had his sights set on UNC from early on.

“At my school, if you could get into NC State or UNC that meant you were smart,” he grins. “I was like, ‘I’m a genius, so I’m going to apply to both!’”

He got into both colleges but the key factor in his selection process was scholarships. Coming from a single-parent household, Tyrell needed significant financial aid to pay for college, and when he received a place at UNC as a Carolina Covenant Scholar, his choice was set.

The Covenant program covers full financial need for students through grants, scholarships and work-study. This meant that Carter didn’t need to rack up huge debts to make his college dreams come true, and he graduated debt free.

Carter also participated in the Summer Bridge program, which helps first-generation students get a flying start at college. It’s a part of his college experience he will never forget.

“I got to go to UNC for the summer, take two classes and meet people from different departments talking to us about what to expect,” he says.

“Just being able to have that experience to learn and grow was amazing, and I still talk to my cohort – we call them Bridgees.”

Getting started in entrepreneurship 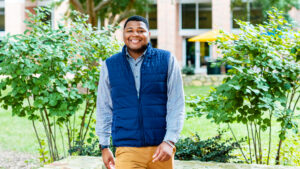 Soon after arriving at UNC, Carter took part in a UNC trip to Silicon Valley. This experience, he says, changed his life forever.

“I got to meet a bunch of alumni and see a part of the world I had never even heard of,” he says. “I fell in love with entrepreneurship.”

Already a self-starter, Carter began looking around at how he could make this dream happen for himself, and soon discovered UNC Kenan-Flagler’s Undergraduate Business Program (UBP). The competitive selection process did not deter him; in fact, he went above and beyond to make it happen.

“I spent my whole first year learning and meeting with people who could help me understand how to get into the Business School and what I needed,” he says. “The best thing I learned from that was knowing the power of your network.”

This enthusiasm for networking is a useful trait for any aspiring entrepreneur, and crucially, it didn’t diminish when Carter got into the Business School in his sophomore year.

One day, between classes, Carter headed to the office of Ted Zoller, T.W. Lewis Clinical Professor of Strategy and Entrepreneurship.

When he put his head around the open door and introduced himself, Zoller was impressed.

“He was like ‘Wow, you’re a badass, you just strolled up in here!’” Tyrell laughs. “‘You’ve got to be in my class next semester!” 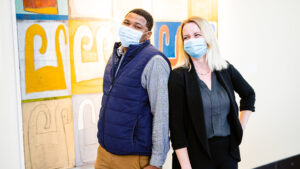 This class turned out to be one of the highlights of Carter’s time at UNC Kenan-Flagler. Alongside a class with MBAs and other UBP students, he met and heard from entrepreneurial thought leaders. He met the people who had written the book on entrepreneurship – literally, the authors of his textbooks spoke in his classes.

Alongside absorbing insights from thought leaders, the hands-on elements of the UBP program meant that Carter could get his hands dirty “learning how to fail, and how to get better.”

During one of the hands-on learning experiences Carter had the idea that would later become his startup, ANTE.

“The pandemic was hitting, and I saw all these small businesses struggling,” he says. “I was taking a data analytics class at the time, and I said, ‘We’re solving these problems to make fake companies more efficient – why can’t we do this with real ones?’”

His professors were encouraging and he soon got to work on his idea, building out the concept of a company that helps small businesses maximize their efficiency and decrease costs by bringing them data in a way they could use.

It was just the seed of a company at that point, but big things were already on the horizon.

As the pandemic gathered speed, Carter’s plans to study abroad in China were cancelled, and he started looking around for alternative ways to spend his summer. 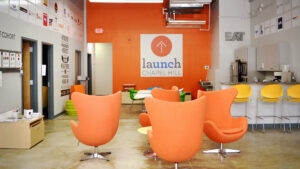 “I found a program called Launch Chapel Hill,” he says. “I’d always wanted to do it, but I never would have had a chance if I were going to China.”

Launch Chapel Hill is an accelerator offering funding and mentorship for promising student startups, but it’s not the only startup launchpad on campus. As well as Launch, Tyrell also submitted ANTE for consideration at Campus Y CUBE, an accelerator specifically for startups with a social impact.

“I got into both, and I was totally mind blown!” Carter says.

Despite the disappointment of having his study abroad plans change, he believes the timing was perfect.

“I got to work on my business, I got to work with computer science students and created somewhat of a demo,” he says. “I’m now working to expand that into something businesses can use by the end of the fall or winter.”

Carter took advantage of all that Carolina has to offer at every step of the way. He participated in the UBP Mentorship Program, and was a member of the Minority Business Student Alliance.

He minored in entrepreneurship. He learned more about the global business world and expanded his international network in a Global Immersion Elective to Santiago, Chile, his first experience abroad. He interned at PricewaterhouseCoopers in San Francisco and the UNC Athletics Department, and had a work-study job with the Master of Accounting Program.

The path to greatness

As a child, he dreamed of success. As an adult, Carter is the founder of a socially-conscious startup and graduating debt free from one of the top-ranked business schools in the U.S.

“Ten or 12-year-old me set out that plan,” he smiles, “and I feel like it’s given me a ton of freedom. I have time to work on what I want to work on for my business.”

In the next few years, Carter wants to focus on becoming the best entrepreneur he can be, and he is getting closer to his dream of being the greatest entrepreneur of all time. To do that, he will draw on not only the knowledge and the network that he developed at UNC, but the passion he developed there, too.

“That’s what ANTE is about,” he explains. “You decide to start a business because you took something that you were really great at, and we want to make sure you don’t have to worry about the business aspect, and can focus on what you love.”

It has taken hard work and incredible dedication for Carter to get to where he is now, but despite his long list of personal achievements, he insists he’s not special.

“Anyone can do this,” he says. “Anybody can live their dreams. If one person reads this article and thinks, ‘I can go after my dreams and I don’t want to be in the box of what society dictates, I can go out and do it,’ that will mean the most to me.”