Seeing the effect of taxes everywhere 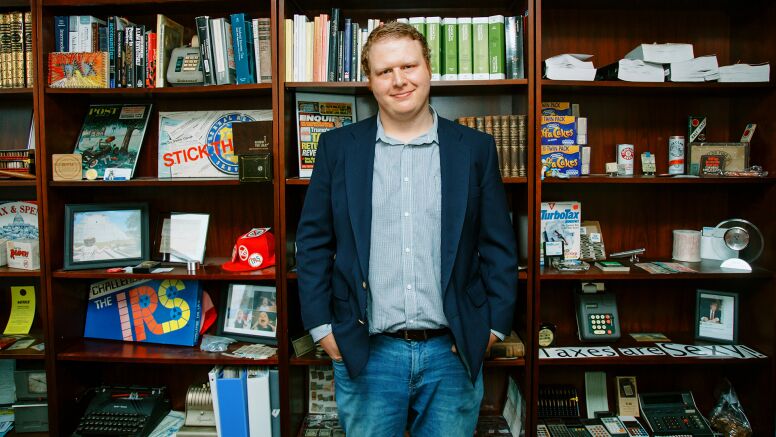 Is a Jaffa Cake a cake or a cookie?

The delicious British food, consisting of a small sponge with a chocolate top and veneer of orange jelly, is shaped like a cookie but, with cake in its name. It might not seem like an obvious case study in a tax class at a business school.

But this seemingly irrelevant question became a matter for the courts to decide. As such, it is an example Jeff Hoopes, associate professor and the Harold Q. Langenderfer Scholar of Accounting, often uses to spark discussion among his students at UNC Kenan-Flagler.

In the U.K., he explains, value added tax (VAT) is payable on biscuits (cookies) covered in chocolate, but not cakes. In 1991, McVitie’s, the British producer of Jaffa Cakes, defended its categorization in a VAT tribunal. McVitie’s won its case against the government: Legally, Jaffa Cakes are indeed cakes, despite being found in the cookie aisle and looking like cookies.

This meant the company did not have to pay tax. And that interests Hoopes, who teaches corporate tax strategy – or essentially how companies can legally pay less tax. 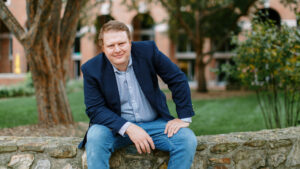 “We often ignore tax in business schools,” says Hoopes, who teaches tax strategy courses in the Master of Accounting and Undergraduate Business Programs. “But in my classes, we talk about how companies take action to minimize their tax burden which, at the end of the day, increases shareholder value.”

He accepts that for some this is a vexed issue and he doesn’t shy away from the controversy. “I face it head on,” he says.

Hoopes believes the media cover corporate tax planning in a way that drive clicks and views, but lacks any real understanding of the tax system and omits the fact that what most companies do is legal. “The media wants to make these things scandalous,” says Hoopes, who frequently interacts with journalists who cite his expertise.

Politicians, too, want to make hay out of companies’ tax planning practices. “Politicians have all used the same word to describe an ideal tax system: fair. Both Joe Biden and Donald Trump both say they want taxes that are fair. But their definitions of fair are very different. The word is basically vacuous.”

This subject makes for enriching classroom discussions with his students who often are divided on tax policies. For example, some students think the corporate tax rate should be increased, while others prefer a lower rate. Hoopes’ leads discussions that highlight that the tax system comes from the political system and is often about trade-offs. “I hope to convey that these trade-offs mean we are unlikely to ever have a system that everyone is happy with,” he says.

Tax might seem a boring subject to some, but Hoopes speaks with infectious enthusiasm, arguing that the implications are very broad indeed.

“Taxes impact how society works – they are one of the primary ways in which citizens are connected to the government” he says.

He rattles off many examples of outcomes brought about because of taxes: the legalization of gay marriage and pot in the U.S., the fall of the Confederacy, White Claw’s economic viability and placement of Bolivia’s borders.

“Taxes really do shape the way we live and what we do,” he says.

If the media overhypes corporate tax avoidance, companies seem to pay attention. he cites research that shows tax directors fret that reducing their tax liability could damage their image with consumers. But, among Hoopes many research projects is one that suggests few if any customers base buying decisions on this.

“Most people don’t think about taxes when they’re shopping in Walmart,” says Hoopes, an avid researcher with studies published in top academic journals. “The practical implication is that directors don’t need to be so scared about customers being turned off by tax planning.”

He serves as research director of the UNC Tax Center. It hosts a flagship annual conference for tax scholars, an annual conference with the Brookings Institution and the Urban Institute, and an annual program for leading tax PhD candidates from across the U.S. He also writes for his blog, Write-Off.

“UNC is famous for tax accounting research. It’s the best place to do it on earth,” says Hoopes, who was recruited to come to UNC Kenan-Flagler from Ohio State University. “Dean Doug Shackelford started an amazing tradition of tax research excellence here at UNC that has been further progressed by Ed Maydew. When I had a chance to come here, it was an obvious choice.”

Before Ohio State, Hoopes earned his PhD at the University of Michigan. Coincidentally one of his mentors was Joel Slemrod, who also mentored Shackelford. Hoopes says it was “an accident” that he pursued tax accounting, but what kept him on this path was just how fascinating the work is. 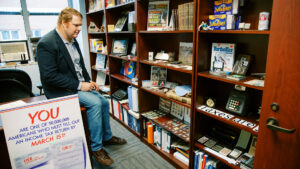 Taxes doesn’t just dominate Hoopes’ teaching and research. Tax-related memorabilia also decorate his office. He is one of a handful of “tax collectors” in the U.S. and is the curator of The Tax Museum at UNC.

In his office, the museum consists of thousands of items of tax memorabilia: magazines and newspapers, tax forms printed on toilet paper, board games, items hundreds of years old, tax-themed political flyers and signs from the most recent election. 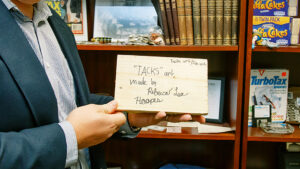 His daughter, one of his five children, recently added to museum by gifting it a piece of art she called “Tacks Art,” a series of nails connected by colorful thread that spell out “TAX.”

There also are Jaffa Cakes – a delicious reminder of how tax really does touch every aspect of our lives.