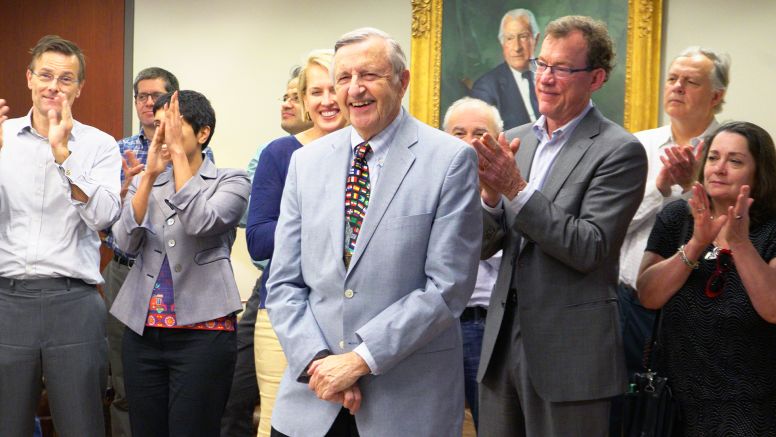 Elvers was a professor at UNC Kenan-Flagler for over 50 years – half of the life of the Business School. He was an incredibly kind, humble and charming person who worked to make the School a better place. 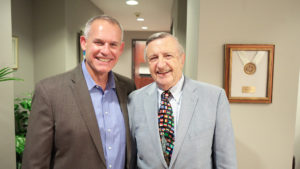 Elvers with Dean Shackelford in 2018

“Doug Elvers was one of the most beloved members of our faculty for 50 years, and his service to the School and the University are legendary,” said Dean Doug Shackelford (BSBA ’80). “Faculty and staff who worked with him over the years described him as the best type of colleague.”

Elvers dedicated his life to shaping young leaders and made extraordinary contributions in research, teaching and service that have influenced thousands of lives and the School’s trajectory, Shackelford said. “Doug loved his students. As his son, John, told me, ‘Dad enjoyed teaching as much as anything in this world.’”

He made contributions at all levels and to all facets of the Business School during his career, said Professor Jack Evans and former dean.

“Doug was, first and foremost, a gentleman within the faculty, treating colleagues, staff and students with respect,” said Evans, who joined the Business School about same time as Elvers.

“Perhaps a time occurred when Doug raised his voice on some matter, but no one is alive to report that. He affected hundreds, perhaps thousands of students’ lives. His teaching was recognized with awards. Doug exemplified service and leadership, and he was a great colleague.”

Read more about Doug’s remarkable contributions to UNC Kenan-Flagler here, and how to honor him.