Skip to content Skip to Programs Navigation
Doug Elvers: Contributing to Carolina for half a century

Doug Elvers: Contributing to Carolina for half a century 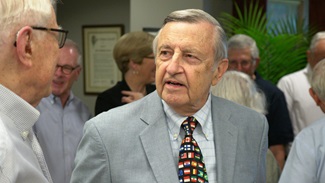 Many experts consider 1968 one of the most consequential years in U.S. history. The nation was at a crossroads after terrible tragedies, looking for young leaders to pave the way for a better tomorrow. UNC Kenan-Flagler was among those in higher education molding the next generation of leaders expected to fix so much of what had gone wrong.

That year Douglas A. Elvers arrived on the Carolina campus. Until his death on Feb. 15, 2020, he dedicated himself to shaping young leaders and making extraordinary contributions in research, teaching and service that have influenced young lives and the School’s trajectory.

Elvers’ service to the School and the University are legendary and included leading in two roles twice: associate dean of the Undergraduate Business Program (UBP) and area chair of operations. He also served as associate director of the full-time MBA Program and associate dean for administration. He also contributed extensive and essential work on accreditation for UNC Kenan-Flagler.

Elvers oversaw the transformational procedure of devising a separate admissions process for business majors, and the UBP received top rankings and assessments.

When the School planned the move from Carroll Hall to McColl Building in the late 1990s, Elvers put his operations expertise into practice. He analyzed Chapel Hill Transit bus routes on Skipper Bowles Drive, which resulted in adjusting a route schedule and introducing a new one. The result was more timely travel for undergraduate students from central campus points and McColl, which continues to aid in class scheduling and serve the campus community today.

Elvers made his biggest impact by looking at business education through a global lens – some 30 years before study abroad experiences were an expectation for undergraduate students.

As the Berlin Wall fell in Germany in 1989, Elvers recognized something lacking in the Carolina curriculum. “We were not teaching enough about what was going on in Europe and elsewhere,” he says.

Elvers changed that. He shifted from teaching operations to focusing on international studies. He created the initial undergraduate course in international business, and it was a game changer for Elvers – and the UBP. He taught that class every semester from 1990 to 2019.

From 1990 to 2004, he taught 48 courses outside the U.S. in conjunction with the UNC Summer School and endorsed by the UNC Kenan-Flagler faculty. He took students to England, Germany and Belgium, and taught as a visiting professor in Nigeria, Germany, South Africa, England, Venezuela and Austria.

“By teaching in these different environments, I picked up different viewpoints,” said Elvers. 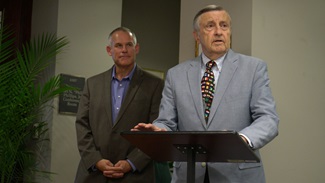 Elvers also contributed through his research. His scholarship focused on job shop schedules and project management. When Dean Paul Rizzo asked the operations area to consider establishing a Center for Manufacturing Excellence, Elvers led the initiative. He surveyed all the manufacturing centers that existed at the time, published two papers and became a recognized expert in center organization and management.

Devotion is a key word when describing Elvers’ life. It did not just apply to his role at UNC Kenan-Flagler. Having earned his BSME from Purdue University, his MBA from Indiana University and his PhD from University of Michigan, Elvers remained loyal to all three alma maters. Notably, he was the chief drum major of the Purdue “all American” Marching Band – who wowed the crowds with his ability to bend his back backwards – and led the alumni band for homecoming weekends through 2019.

What many don’t realize is he sang regularly in a church choir and formerly sang in a barbershop chorus. And he conducted hefty genealogical research. His family was, of course, important to him. His late wife Carol, to whom he was married for 54 years, often joined him on trips abroad with students and was the ideal “den mom.” Elvers and his wife had three children – one son and two daughters –and their granddaughter studied abroad in Prague as an NC State student.

The “best type of colleague”

“All faculty who have worked with Doug over the years have described him as the best type of colleague,” says Doug Shackelford, dean and Meade H. Willis Distinguished Professor of Taxation. “He was an incredibly kind and charming person who worked tirelessly for the last 50 years to make the School a better place.”

When Richard Bettis, Ellison Distinguished Professor of Strategy and Entrepreneurship, first arrived at Carolina in 1992, he noticed Elvers wearing one of his many European currency and European flag ties. They began a conversation about the EU that continued for decades. “Because of Doug’s deep knowledge of Europe and Germany, in particular, it was always engaging to discuss the latest – usually unexpected – developments.  Who would have thought in 1992 we would be taking about Brexit in 2019?”

“Doug was extremely accomplished in multiple ways, but always humble,” says Bettis. “He had a profound impact on the lives of many students that is unmeasurable, but is enormous. He is what was once referred to as a ‘gentleman and scholar.’”

For Elvers, interacting with students was deeply rewarding. “It’s a case of enjoyment of being with students at the age they are. I teach mostly seniors, who are well prepared and inquisitive about the world,” said Elvers. “I feel all students, when they leave this class, will carry on discussions about what will happen in the world.”

He had faith they will change it for the better.