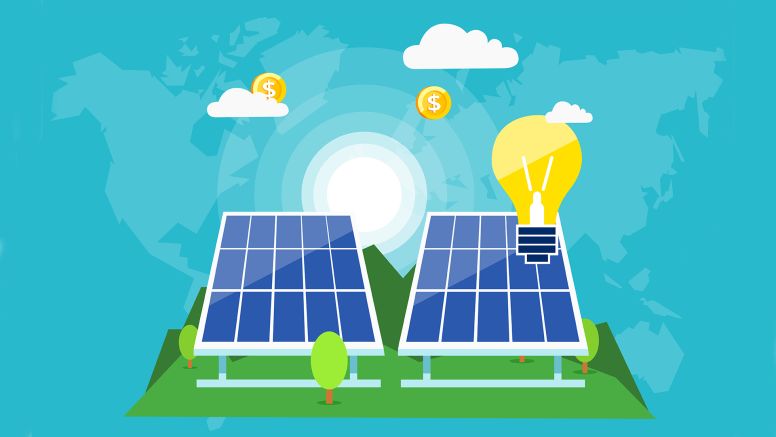 Net metering — where homeowners with solar panels sell excess electricity back to their power company — could actually boost utility profits.

Their findings have implications for how utility companies lobby state regulators and how they manage their emerging business strategies.

They also suggest that home solar panels – which produce power without a carbon footprint and cut monthly electrical bills – might be a positive for utility companies, consumers and the environment.

The professors made the discovery after modeling the effect of distributed renewable energy sources on utilities that buy at least some of their power from the wholesale electricity market.

“Net-Metered Distributed Renewable Energy: A Peril for Utilities?” is the first paper to include wholesale market dynamics in an analysis of how net-metered distributed renewable energy is likely to affect utility profits.

And it leads to some non-intuitive findings.

Without considering the wholesale market, Swaminathan says, an intuitive analysis “is basically saying ‘Hey, you know what, under net metering, end-users installing solar panels will reduce the amount of dependence and utilities are going to be paying a lot more out of pocket and therefore it could be hurting them.’”

But the utility profits aren’t that simple.

The growth of solar energy under net metering

Electricity users across the U.S. are installing their own power-generating equipment at an increasing pace. Residential solar energy capacity has increased by more than 350% in the last six years. The Edison Electric Institute, a utility association, in 2012 classified solar as a “challenge” for utilities that could reduce retail sales and lead to the loss of customers.

Net metering is a policy — now mandatory in a vast majority of the U.S. — that requires utilities to buy back excess electricity produced by their customers.

Some states have rules that require utilities to buy back the power at retail rates — which is simpler from an accounting standpoint but more expensive for the utility – while others use wholesale rates for the purchase, which are usually lower than retail rates but can fluctuate at different times.

But, this is the impact of net-metering rules on one end of the energy supply chain.

On the other end is the wholesale market. While utility companies might own some of their own generation capacity, many purchase additional electricity, as they need it, from a wholesale market of various participants including independent power producers.

Wholesale electricity costs affect utility profits. But the amount of power that utilities need to buy from the wholesale market is dependent on how much power they can produce themselves as well as how much power is produced by their customers.

“These are the supply dynamics that have been missed in the past research,” Swaminathan says. “In the past people have assumed, ‘I can produce it myself. If I cannot produce it, I’m going to have to pay some additional amount.’”

For most utilities — assuming they get at least some of their power from the wholesale markets — distributed generation can actually boost their profits.

To see if their model would work in the real world, Swaminathan and Sunar used 2016 data from California utilities and California wholesale market to understand the impact of net-metered distributed solar on utility profits. On average, they found, if a utility meets as little as 20.79% t of its electricity needs from the wholesale markets, distributed solar under net metering would increase its profits.

In addition to increased profits for utilities and lower costs for customers who generate some of their own power, distributed solar under net metering also has a net positive environmental impact, Swaminathan says, as more electricity ends up being generated from solar panels, essentially carbon-free energy.

Though some distributed solar under net metering can increase utility profits, it seems obvious that if all customers produced 100% or more of their power needs, utilities would lose money.

Swaminathan and Sunar’s analysis found that utility profits are maximized with a certain amount of distributed renewable power. The profit maximization point depends on whether net-metering is implemented with retail or wholesale rates and other factors.

“There is a threshold beyond which more people adopting solar panels is not very good for you,” Swaminathan says, “and that’s where the profit starts dropping.”

The research has important implications for what power company lobbyists ask state utility regulators for when it comes to net-metering regulations.

“Many of the utilities are lobbying saying, ‘Look, we don’t want this. This is going to be harmful,’” Swaminathan says. “Instead, maybe they should lobby to say, ‘OK, we want to have a maximum adoption in a given region and beyond that we don’t want it.’”

That position, he says, would boost utility profits while also lowering the carbon impact of power generation and cutting costs for consumers.