Pinching pennies is her business 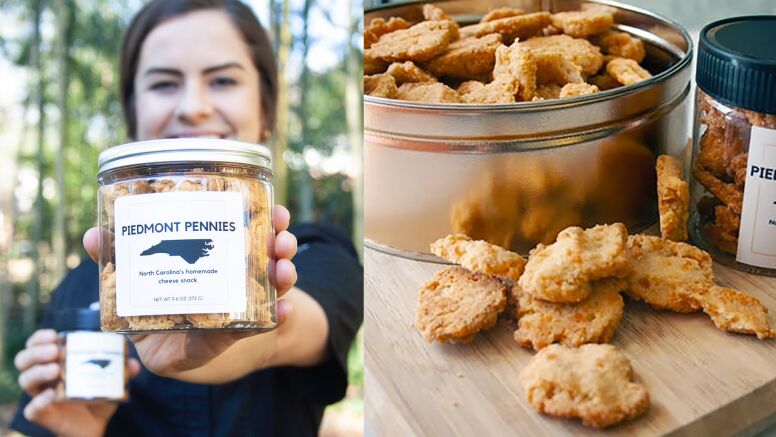 A favorite childhood memory for Becca Jordan Wright (MBA ’21) is baking “pennies” with her dad, filling their home with the smell of cheese and butter.

They used her grandmother’s recipe to create a different take on cheese straws: a cross between a cheese biscuit and a homemade Cheez-It with a kick of spice.

“I have memories of pinching ‘pennies’ around the holidays because we’d give them as gifts to neighbors,” says Wright. 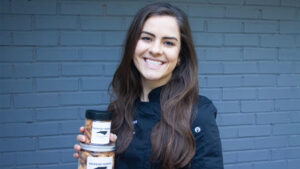 Those memories and rave reviews from friends who devoured her handcrafted snack led Wright to launch her startup Piedmont Pennies in September 2020 – while pursuing her MBA at UNC Kenan Flagler Business School amid the global pandemic.

“I love being in hospitality – making people feel safe, welcome and comfortable, no matter who they are or where they come from,” says Wright.

Now Wright bakes her pennies at the Carolina Commercial Kitchen in Charlotte, and hired her first employee in January 2021. Business is thriving despite the pandemic, says Wright, and people are more interested in supporting local vendors with contactless delivery options.

In 2020, Wright participated in the Adams Apprenticeship program, a year-long program dedicated to guiding UNC’s top potential entrepreneurs as they discover their own unique paths. Students supported each other, participated in local treks and learned from guest speakers and advisors. “The cohort was and is a family of entrepreneurial-minded students looking to make impact and help each another in the process,” she says.

Piedmont Pennies is part of the Launch Chapel Hill program, which provides co-working space and support for startup businesses. It also provides Wright with mentoring and coaching around scaling her business.

At UNC Kenan-Flagler, Wright credits the student-run, Entrepreneurship and Venture Capital Club for catapulting her into entrepreneurship classes and pursuing her goal of being her own boss.

The Carolina Way for entrepreneurs

Being able to turn to the UNC Kenan-Flagler community for support was critically important, says Wright.”

Things started to heat up in September 2020. Classmates, alumni and professors all pitched in to support her as she pursued her dream. People from the community bought her product, and others helped her bake pennies for the holiday season. As a result of the successful pilot, she turned down a full-time offer at Facebook, where she had interned virtually during the summer, to continue to build Piedmont Pennies.

One of her mentors, Alex Brandwein (MBA ’20) of Brandwein’s Bagels in Chapel Hill, was instrumental to her success. 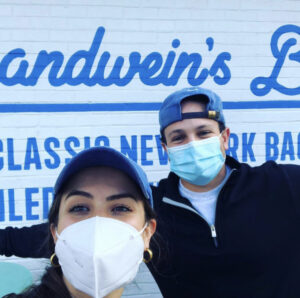 “He took the nontraditional route, the road less traveled, and he inspired me to do the same,” she says. “Alex advised me in the big picture things, like the fact that our lives are not linear, as well as the nitty gritty, like how to apply for liability insurance.”

Another person who greatly contributed to Wright’s emergence as an entrepreneur is Shawn Munday, professor of the practice of finance. She took two of Munday’s courses, and she says he went above and beyond to support his students.

“Professor Munday made topics like entrepreneurship through acquisition and private equity accessible to students like me who did not have those experiences prior to business school,” says Wright.

When Wright was approached about buying a local small business, she turned to Munday for advice. “He respected me as a businesswoman and not just a student,” says Wright.

Paving her own path

Wright took a winding road to business school. Originally from Burlington, North Carolina, she grew up hoping she would attend UNC-Chapel Hill.

“I’m a Tar Heel born and bred with my dad, uncle, grandpa and my sisters all graduates of Carolina,” she says.

When Wright arrived as a first-year student, she planned to follow in family footsteps and pursue healthcare. She earned her BSPH at the Gillings School of Global Public Health.

After graduation, she sought a challenging job delivering consulting services for the Federal government. She ended up at Deloitte Consulting in Washington, D.C., where she worked as a contractor for the Department of Homeland Security and the Department of Health and Human Services.

“I learned so much during my time in consulting, but felt that professional trajectory did not align with my personal goals,” says Wright. 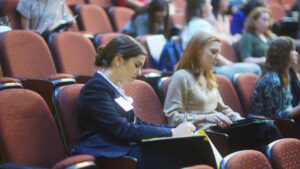 One of the main reasons she chose UNC Kenan-Flagler was her exposure to the Carolina Women in Business (CWIB) annual conference.

“It’s when I realized that the MBA wasn’t just for finance guys,” she says. “This could be for me.”

She knew she wanted to be part of CWIB if she were admitted to the Full-Time MBA program. Indeed, she joined the club and served as its president. One of her goals was to make CWIB more diverse and engage more male allies. When COVID-19 pushed classes and events online, she and her team didn’t miss a beat in keeping the community strong. In the new Zoom environment, they prepared classmates for virtual internships, checked in on one another’s mental health, held virtual stitch-alongs to make masks for UNC Health, sent care packages to women admitted to the full-time MBA Program, and hosted virtual yoga, HIIT workouts and anti-racist book club sessions.

While researching business schools and before Wright arrived on campus, she experienced concerns that many applicants face. Will I get in? Is it worth it? How can I afford it? How can I not?

Wright felt a sense of responsibility about the financial investment. She was dating her now-husband, Coble Wright (BA ’16), and worried about starting life together under a weight of debt.

However, she was a Forté Fellow, a scholarship program to encourage qualified women to earn an MBA, and a Consortium Fellow, which aligned to her personal mission and previous work in diversity recruiting at Deloitte. She also was selected as a Dean’s Fellow.

Still, she and her husband would have a significant financial burden. Then, she found out she won the prestigious Jay Edward Klompmaker MBA Fellowship, which relieved a lot of stress.

To show her gratitude, she reached out to Klompmaker, the retired UNC Kenan-Flagler professor. They met for lunch along with Klompmaker’s wife, Mary Ann, and the three became good friends. Beyond the fellowship, the couple has provided support and friendship to Wright.

The UNC Kenan-Flagler community has motivated Wright. In fact, she turns to the School’s core values often as she tries to scale her startup.

“Among UNC Kenan-Flagler’s core values are inclusion and teamwork,” says Wright. “Including diverse stakeholders has been  critical to my business as we scale this food company to capture the best of small-town local and share it with our entire community.”

The University and UNC Kenan-Flagler are special to her.

“The MBA is one of the best decisions I have ever made,” she says. “I owe this to the lifelong friends and mentors I’ve made in this program and the high bar they have set for me in and out of the classroom.”