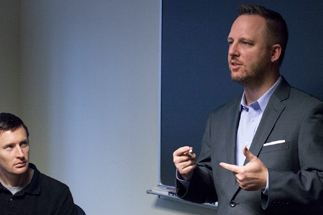 Growing up in a rural town in Ohio, Michael Meredith thought he would end up working in healthcare, primary education or chemical plants – common areas of occupation for people in his hometown. But after getting encouragement from his family and studying abroad while earning his MBA from Ohio University, he decided to pursue something different.

He worked at a go-to-market firm led by Neil Rackham, author of the widely used sales book “SPIN Selling.” He then went on to work in various consulting, management and sales positions before realizing his calling was elsewhere.

“As a first-generation college student, I discovered that I liked the university atmosphere,” says Meredith. “So I went to one of my MBA professors and said ‘I want to do what you do.’” While he thought being a professor would be just a “sweet gig,” Meredith soon realized that it was his toughest challenge yet. “In consulting, it’s not uncommon to work 60 hours a week; as a professor, it’s not uncommon to work 80.”

When Meredith was a consultant, he consistently saw how important communication skills were in terms of being successful inside an organization. The best communicators tended to be better sellers and rise into leadership positions more quickly, he observed. So when he went to Bowling Green State University to earn his PhD, he decided to study communication and focused on areas related to social psychology.

Meredith now teaches business communication at UNC Kenan-Flagler, where he’s the faculty lead for the Undergraduate Business Program’s management and corporate communication course and teaches in the MBA and Master of Accounting programs.

“The reputation of UNC Kenan-Flagler was something I was keenly aware of before I interviewed here,” smiles Meredith. “It exceeded all my expectations – the students, the faculty, the specific area of communication.”

In addition to the typical speaking, writing and presenting lessons you would expect from a business communication course, Meredith also emphasizes listening. “There is inherently some risk involved,” he says. “If you are honestly listening and trying to understand somebody, it potentially threatens your ideas.” Meredith insists his students be open and try to facilitate this kind of active listening process, especially if it means engaging with ideas different than their own.

Social media, one of Meredith’s areas of expertise, is a “double-edged sword” in communication. “Now more than ever, we are being bombarded by outside interference and competing interests,” which makes active listening even more difficult, he says. But as a business professional, “if you’re not social media savvy, you’re doing yourself a disservice.”

Meredith uses the adage, “Perception is reality when it comes to communication” to approach everything from social media to intercultural communication. “Having worked outside the U.S., I know it’s really easy to mess up,” he says. “And whether you’re inside or outside the U.S., there are nuances you have to be aware of and adapt to.” Meredith recounts one consulting trip to Brazil, where his team was slated to begin speaking at 8 a.m. – but the senior VPs didn’t show up for another 20 minutes. “That soft timeline is more common in South America,” he laughs.

Regardless of your audience, authenticity is key to communication, he says. “It’s not enough to have a great idea – you need to rally people to get it implemented, and that requires people trusting you.” Recruiters are looking for this quality more and more in young professionals, especially those who are going to be client-facing. “Business is about relationships,” says Meredith. “And you can’t have great relationships without great communication.”

At UNC Kenan-Flagler, “we mold leaders,” he says. “The fact that the School has put such an emphasis on communication is a great testimony to that.” Often business schools will only have a couple faculty designated to the area – but the leadership at UNC Kenan-Flagler understands that while elements of hard skills can change fast , the softer skills tend to be transferrable throughout your career.

Meredith gets involved with his students outside the classroom in a variety of ways, from helping with cover letters to overseeing student startups. Most recently, he advised undergraduate students on how to brand new sustainable “Carolina Conscious” cups. “Things like that, where students have great ideas or they’re trying something new – I love that,” he says. Meredith also serves as the faculty advisor for the Future Business Leaders of America Club at UNC Kenan-Flagler.

Clearly he has found his calling and shares the credit with his family. “I couldn’t do my job without the love and support of my wonderful wife and three kids,” he says.

“UNC Kenan-Flagler is incredible. To work with smart people as your job on a day-to-day basis – it’s hard for me to articulate the joy that brings as a career,” says Meredith. “I hope I’m here for a long time.”